The convoy of cars bearing the black al-Qaeda flag came at high speed, and the manager of the modest grocery store thought he was about to get robbed. Mohamed Djitteye rushed to lock his till and cowered behind the counter. He was dumbfounded when instead, the al-Qaeda commander gently opened the grocery's glass door and asked for a pot of mustard. Then he asked for a receipt.

Confused and scared, Djitteye didn't understand. So the jihadist repeated his request. Could he please have a receipt for the $1.60 purchase?

This transaction in northern Mali shows what might seem an unusual preoccupation for a terror group: Al-Qaeda is obsessed with documenting the most minute expenses. 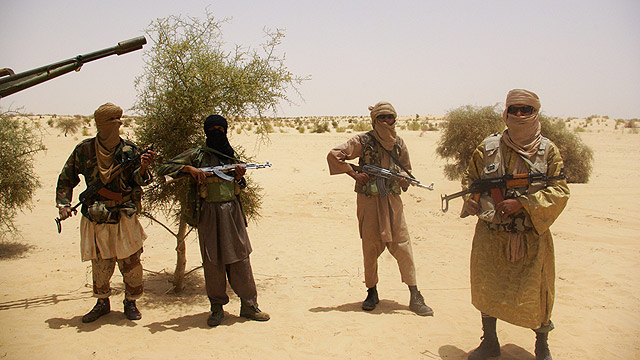 Al-Qaeda officers in Mali (Photo: AFP)
In more than 100 receipts left in a building occupied by al-Qaeda in the Islamic Maghreb in Timbuktu earlier this year, the extremists assiduously tracked their cash flow, recording purchases as small as a single light bulb. The often tiny amounts are carefully written out in pencil and colored pen on scraps of paper and post-it notes: The equivalent of $1.80 for a bar of soap; $8 for a packet of macaroni; $14 for a tube of superglue. The accounting system on display in the documents found by The Associated Press is a mirror image of what researchers have discovered in other parts of the world where al-Qaeda operates, including Afghanistan, Somalia and Iraq. The terror group's documents around the world also include schedules for corporate training sessions, spreadsheets with salaries, public relations directives, philanthropy budgets and letters from the equivalent of a human resources division. 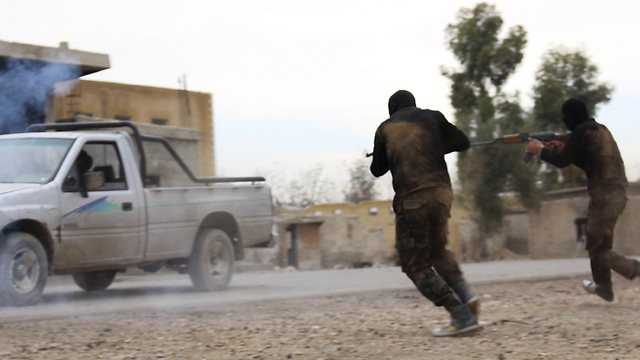 Taken together, the evidence suggests that far from being a fly-by-night, fragmented terror organization, al-Qaeda is attempting to behave like a multinational corporation, with what amounts to a companywide financial policy across its different chapters.

"They have to have bookkeeping techniques because of the nature of the business they are in," said Brookings Institution fellow William McCants, a former adviser to the US State Department's Office of the Coordinator for Counterterrorism. "They have so few ways to keep control of their operatives, to rein them in and make them do what they are supposed to do. They have to run it like a business."

The picture that emerges from what is one of the largest stashes of al-Qaeda documents to be made public is of a rigid bureaucracy, replete with a chief executive, a board of directors and departments such as human resources and public relations. Experts say each branch of al-Qaeda replicates the same corporate structure.

Among the most revealing documents are the receipts, which offer a granular view of how al-Qaeda's fighters lived every day as well as its larger priorities. "For the smallest thing, they wanted a receipt," said 31-year-old Djitteye, who runs the Idy Market on the main, sand-carpeted boulevard in Timbuktu. "Even for a tin of Nescafe." 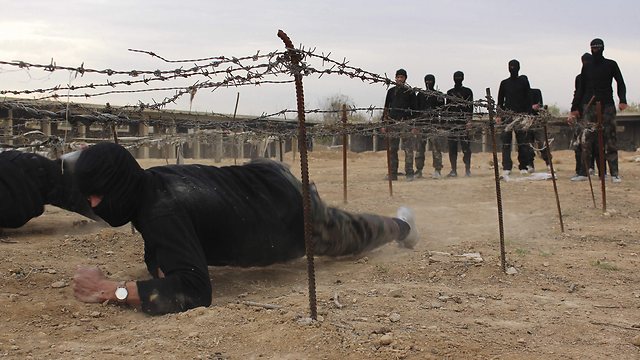 A Syrian al-Qaeda course (Photo: Reuters)
An inordinate number of receipts are for groceries, suggesting a diet of macaroni with meat and tomato sauce, as well as large quantities of powdered milk. There are 27 invoices for meat, 13 for tomatoes, 11 for milk, 11 for pasta, seven for onions, and many others for tea, sugar, and honey. They record the $0.60 cake one of their fighters ate, and the $1.80 bar of soap another used to wash his hands. They list a broom for $3 and bleach for $3.30. These relatively petty amounts are logged with the same care as the $5,400 advance they gave to one commander, or the $330 they spent to buy 3,300 rounds of ammunition. Keeping close track of expenses is part of al-Qaeda's DNA, say multiple experts, including FBI agents who were assigned to track the terror group in the years just after its founding. This habit, they say, can be traced back more than three decades to when a young Osama bin Laden entered King Abdul Aziz University in Saudi Arabia in 1976 to study economics, and went on to run part of his millionaire father's construction company. After he was exiled to Sudan in 1992, bin Laden founded what became the country's largest conglomerate. His companies and their numerous subsidiaries invested in everything from importing trucks to exporting sesame, white corn and watermelons. From the get-go, bin Laden was obsessed with enforcing corporate management techniques on his more than 500 employees, according to al-Qaeda expert Lawrence Wright, author of a well-known history of the terror group. Workers had to submit forms in triplicate for even the smallest purchases – the same requirement bin Laden later imposed on the first al-Qaeda recruits, he said. In Aghanistan, detailed accounting records found in an abandoned al-Qaeda camp in 2001 included salary lists, stringent documentation on each fighter, as well as notebook after notebook of expenses. In Iraq, US forces recovered entire Excel spreadsheets, detailing salaries for al-Qaeda fighters. "People think that this is done on the back of an envelope. It isn't," says Dan Coleman, a former FBI special agent who was in charge of the bin Laden case file from 1996 to 2004. One of the first raids on an al-Qaeda safehouse was led by Coleman in 1997. Among the dozens of invoices he found inside the operative's home in Kenya were stacks of gas station receipts, going back eight years.

This detailed accounting system allows al-Qaeda to keep track of the significant sums of money involved in feeding, training and recruiting thousands of fighters. It's also an attempt to keep track of the fighters themselves, who often operate remotely. The majority of the invoices found on a cement floor in a building in Timbuktu are scribbled by hand, on post-it notes, on lined math paper or on the backs of envelopes, as if operatives in the field were using whatever writing surface they could find. Others are typed, sometimes repeating the same items, in what may serve as formal expense reports for their higher-ups. Al-Qaeda clearly required such expense reports – in a letter from the stash, middle managers chide a terrorist for not handing his in on time. In informal open-air markets such as those of Timbuktu, vendors didn't have receipts to hand out. So, traders say, members of al-Qaeda came in pairs, one to negotiate the sale, and the other to record prices on a notepad. This practice is reflected in the fact that almost all the receipts are written in Arabic, a language few residents of Timbuktu know how to write. The fighters would ask for a price, and then write it down in their Bloc Note, a notebook brand sold locally, said pharmacist Ibrahim Djitteye. "It surprised me at first," he said. "But I came to the conclusion that they are here for a very specific mission.... And when you are on assignment, you need to give a report. They have their own higher-ups, who are expecting them to account for what they spent." The corporate nature of the organization is also on display in the types of activities they funded. For example, two receipts, for $4,000 and $6,800, are listed as funds for "workshops," another concept borrowed from business. A flier found in another building occupied by their fighters confirm that al-Qaeda held the equivalent of corporate training retreats, listing detailed schedules for early morning prayer, weapons classes and seminars on the meaning of jihad.

The nuts and bolts of governing

A relatively small ratio of the receipts are expense reports for fighters and weapons. One unit presented a politely worded request for funds, entitled: "The list of names of mujahideen who are asking for clothes and boots to protect themselves from the cold." Far more deal with the mundane aspects of running a state, such as keeping the lights on. Al-Qaeda in the Islamic Maghreb invaded Timbuktu in April 2012, and took over its state-run utilities, paying to have fuel trucked in from neighboring Algeria. One invoice shows they paid $3,720 for 20 barrels of diesel for the city's power station. There's also an advance for the prison and a detailed budget for the Islamic Tribunal, where judges were paid $2 per day to hear cases. It's also clear that the fighters were actively trying to woo the population. They set aside money for charity: $4 for medicine "for a Shiite with a sick child," and $100 in financial aid for a man's wedding. And they reimbursed residents for damages, such as $50 for structural repairs, with a note that the house in question "was hit by mujahideen cars." And it's obvious that the fighters spent a good part of their time proselytizing, with expense reports for trips to distant villages to impart their strict vision of Islam. One receipt bluntly lists $200 for a "trip for spreading propaganda." While not overtly explained, the sizable receipts for car repairs suggest regular missions into the desert. The many receipts for oil changes, car batteries, filters and parts indicate the tough terrain battered the fighters' Toyota Land Cruisers. Finally, the names on the receipts reveal the majority of fighters on the group's payroll were foreign-born. There's a $1,000 advance to a man identified as "Talhat the Libyan." Another is issued to "Tarek the Algerian." The names furthermore confirm that the top leaders of al-Qaeda in the Islamic Maghreb were based in Timbuktu. Among them was Abou Zeid, probably the most feared of al-Qaeda's local commanders who orchestrated the kidnappings of dozens of Westerners until his death this spring. "In the name of Allah, the most merciful," begins a request for funds dated December 29, 2012, and addressed to Abou Zeid. "We are writing to inform you that we need rockets for our camp – a total of 4 is needed. May God protect you." The extent of the documentation found here, as well as in the other theaters where al-Qaeda operates, does not mean the terror group runs as a well-oiled machine, cautions Jason Burke, author of the book Al-Qaeda. In other words, al-Qaeda's structure as a company does not guarantee its success. "Bureaucracy, as we know, gives senior managers the illusion they are in control of distant subordinates," Burke said. "But that influence is much, much less than they would like." Al-Qaeda's accounting practices left a strong impression on at least one person in Timbuktu: Djitteye, the convenience store manager. The al-Qaeda commander who came in for mustard was Nabil Alqama, the head of al-Qaeda in the Islamic Maghreb's "Southern Command." He became a regular. One day, he asked the store employee to get a receipt book printed so he could provide more official-looking invoices. Djitteye obliged. The green receipt book with neat boxes now sits under his cash register. These days, whenever customers come in, he always asks if they would like a receipt.

No one ever does.