The second half of next year, it seems, will be a challenging period. We'll have to deal with the consequences of political-diplomatic processes which will reach maturity towards June 2014. Unfortunately, it's reasonable to assume that most will end in failure or in an unstable compromise hiding the seeds of the next conflict.

The negotiators will of course market the unsatisfactory results as "a small step forward," as a stage in a long road, but the implications are clear – the second half of 2014 will be an explosive period filled with dilemmas.

The forecast: A quiet winter, a tense spring and a summer which could be stormy.

The global framework for the Middle Eastern processes will not be much different. The Barack Obama administration, despite criticism, will continue running a compromising foreign policy zigzagging between a desire to implement supreme principles and utilitarian pragmatism. The result: A significant erosion in the United States' status as a leading and influential power in the international and Middle Eastern arena.

Russia will continue its neo-imperial policy, taking advantage of the conflicts and tensions as it is doing in Syria now. Vladimir Putin will gain prestige and make a profit from weapon sales but won’t even get close to the status the US still enjoys in the region.

The European Union will continue focusing its efforts on getting out of the economic crisis hitting its countries, but at the same time will not let go of its active involvement in the affairs of the Middle East and Africa.

China's activity here will be based almost only on its economic interests, while in Asia it will act aggressively out of clear nationalistic motives – which are already raising heavy concerns among its neighbors. Especially in Japan, which has launched an accelerated armament process. 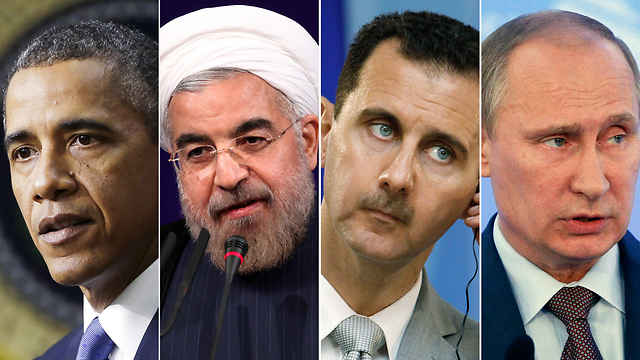 The Middle Eastern processes will take place within this framework: US-brokered Israeli-Palestinian negotiations on a peace agreement; negotiations between Iran and world powers over dismantling or "turning back" the military nuclear program in exchange for lifting the sanctions; disarming Syria of its chemical weapons and destroying them; an international conference in Geneva in the presence of the fighting parties, aiming to put an end to the bloodshed in Syria; the rise in power of the al-Qaeda-inspired jihadist Islam at the expense of the political Islam like the Muslim Brotherhood; the new Egyptian regime's effort to move to normalcy and a democratic civilian regime including the approval of a constitution, parliament elections and presidential elections; as well as the internal battles in Turkey between the supporters of Recep Tayyip Erdogan and his opponents, which will reach their peak in the municipal elections this spring.

The dilemmas which will challenge all of us this year are led by two diplomatic issues which also have the potential of turning into a violent conflict in the summer: The Palestinian issue and the Iranian nuclear issue.

The current effort to reach an Israeli-Palestinian agreement is quickly approaching a crossroad which will require decision making. Israel is facing three options which each carry a painful price: It's safe to assume already that Netanyahu and the cabinet will choose the second option. 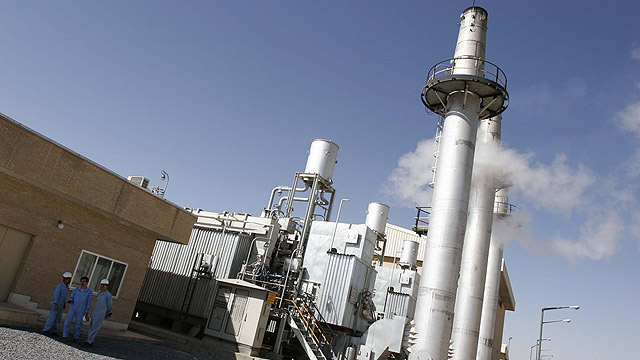 Arak reactor which may produce plutonium for a bomb (Photo: Getty Images)

The second dilemma has to do with Iran. It's already clear to Western intelligence communities that Tehran, despite its smile offensive, has not given up on its intention to become a nuclear threshold country which can produce a reliable nuclear explosive device within several weeks.

Moreover, President Rohani and his camp are facing tough opposition to their policy from the Revolutionary Guards and the conservative Ayatollahs. This can be seen in the Iranian foot dragging in the current preliminary negotiations on the implementation of the interim agreement signed in Geneva in November. But the real test will be in June: If a permanent agreement is even signed between the powers and Iran, and if it is – what will be its nature. It's reasonable to assume that Israel will not be satisfied and will not receive the minimum it is demanding: Setting Iran's military nuclear program at least two years back. In such a situation Netanyahu, Ya'alon and Lieberman, and perhaps the other cabinet ministers as well, will face quite a difficult dilemma: Accepting the outcome and a gradual easement of the sanctions as the lesser of two evils, or launching an open political conflict with the world powers and the US president and administration. The conflict will also require recruiting Israel's friends in the Congress against their president and may also entail a renewed threat of a military strike on the nuclear facilities. Neither side will benefit from such a conflict, especially not Israel which is risking losing defense aid and public support in the US, and a war, if Netanyahu decides on a military operation. Yes, as far as Israel is concerned the military option exists and can be expected to be put on the table again in June. 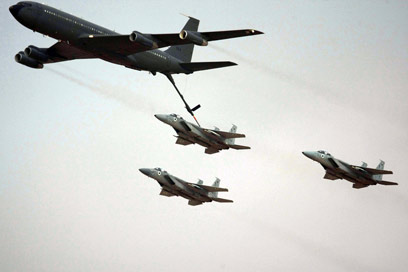 In the national security area, alongside "old" and known challenges, the security forces will be dealing with some new challenges in the coming year.

The IDF and intelligence community must prepare an intelligence and operational infrastructure and develop fighting methods which will allow them to deal with a "jihadist tsunami" piling up on Israel's borders, mainly in Syria.

We are talking about fanatic Salafi Sunnis operating as part of al-Qaeda or inspired by al-Qaeda, who are succeeding in laying their hands on huge amounts of modern weapons from the depositories of the Syrian army which Jabhat al-Nusra and the Islamic fronts have taken control of, and on Libyan weapons which keep flowing into the hands of Salafi groups operating in Sinai and Gaza. The Israeli intelligence community is mainly concerned about Jabhat al-Nusra, which is active in Syria and includes some 10,000 motivated and experienced fighters, including about 1,000 foreigners from Europe and Asia. This is the biggest fighting system directly affiliated with al-Qaeda. If and when its people take over Syria, for example, they will direct their full fanatic passion and the weapons they have accumulated against us, in a way which will make us long for Hezbollah. The Americans, and mainly the Europeans, are also concerned about the al-Qaeda base which has taken its place on their doorstep. 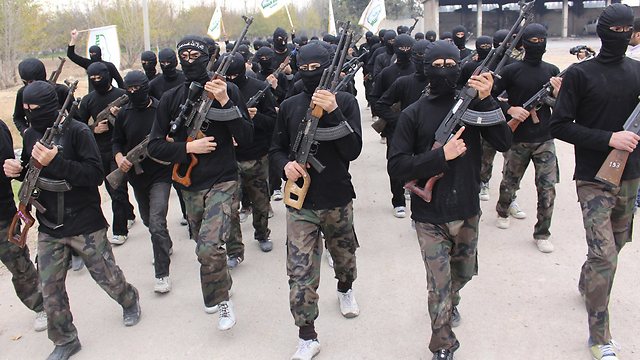 2. Israel no longer making an impression

A second challenge is dealing with the "terror without an address." Not only Judea and Samaria, but also in Gaza and the Lebanon and Syria borders, have seen more cases of terror attacks of all types this year, from murder and kidnapping to rocket fire, which no one has taken responsibility for. Worse, the terrorists did not leave an "intelligence signature," preventing the Shin Bet and IDF from thwarting or punishing after the attack in a way which would deter additional "lone" perpetrators.

With the absence of organizations claiming responsibility or a clear identification, Israel is using a worn-out pattern of operation which is no longer impressing anyone and is inefficient, according to which whoever controls the area the terror attack came out of is responsible for it. According to this worn-out mantra, Hezbollah and the Lebanese government are responsible for any incident of fire from Lebanon, even if it’s clear that whoever launched the Katyusha rockets did it in order to get them into trouble. The same applies to Hamas in Gaza. The IDF's retaliatory artillery fire or air strikes have no effect and sometimes even act as a boomerang against us and encourage revenge attacks. This situation requires the IDF and intelligence community to engage in creative thinking: How to thwart and mainly how to deter the terrorists without an address, without getting into a wide-scale operation which will lead to a major flare-up.

A third new challenge is what the IDF calls "the underground": A system which includes attack, fighting and rocket launching tunnels which Hamas has prepared ahead of the next conflict, on the Gaza border and within the Strip. There are signs that Hezbollah is also going underground.

The Southern Command is mainly concerned about the attack tunnels, through which Hamas and the Palestinian Islamic Jihad are planning to smuggle fighters into our territory in order to storm communities and posts near the fence, kidnap and carry out mass killings. Southern Command chief Sami Turgeman is not the only one losing sleep over this threat. So is the entire General Staff, which is working vigorously to find a answer.

4. Winning from the sea

A fourth challenge is building an ability for the Navy to participate in the land fight as an important factor. Until now, the Navy has mainly served as a defender of the coasts and sails to and from Israel. Intensive work is now taking place to allow Navy vessels to hit targets on the ground with masses of accurate fire and help field units with other forms of battle.

The real challenge Chief of Staff Benny Gantz will have to deal with in the fourth year of his term (which begins next month) is preserving the IDF's preparedness and competence within the limits of the budget he has received.

Reserve units which do not belong to the first attacking ranks of the field command will not be practicing in the coming year; very few reservists will engage in operational activity in the territories and along the borders, and all the burden will fall on the soldiers of the regular brigades' fighters, who will engage in nine months of operational activity. They will be left with very little time for training and maintaining their fitness. The stock of arms and spare parts will also face erosion. Head of the IDF's Planning Directorate, Major General Nimrod Shefer, is saying openly that 2014 will be a year of minimum preparedness. The chief of staff has taken quite a significant but calculated risk here in light of the budget cuts forced on him in the middle of the year and in light of the government's commitment that starting in 2005, the IDF budget will resume its growth. The absurdity is that the government has in fact already canceled the defense budget cut for 2014 because this year's deficit was smaller than expected. But the army, which has sent home 1,000 career soldiers in the past two months, did not receive an addition of one shekel for training or equipment. It turns out that most of the money returned to the defense budget disappeared into the salary, pension and rehabilitation (disabled soldiers and bereaved families) clauses; the defense industries received advance payments too. Who has been left with nothing? That's right, the army and reserve forces. We have already been through all this: Remember the Second Lebanon War in the summer of 2006? The summer of 2014 is just around the corner.