UNHCR representative in Israel, Walpurga Englbrecht said the new 'open' Holot facility is in fact a detention center for all manner and purpose.

“I am particularly disquieted about the purpose of the so-called 'open' residence facility in Holot which, in its current form and despite its designation as 'open', would appear to operate as a detention center from where there is no release. This means in effect indefinite detention,” Englbrecht said in a statement.

After thousands of asylum seekers held a protest in Tel Avivre's Rabin Square Sunday, the UN body expressed its support for their cause, slamming Israel's treatment of the refugees. In wake of Sunday's protest and calls for a general labor strike on the part of the refugees, Tel Aviv's Mayor Ron Huldai commented on the issue, saying "it is my feeling that today's protest was just the beginning of a long process which I fear could end in violence.

"The protest stems from true hardship caused by the government ignoring the issues that migrants and Tel Aviv residents face." 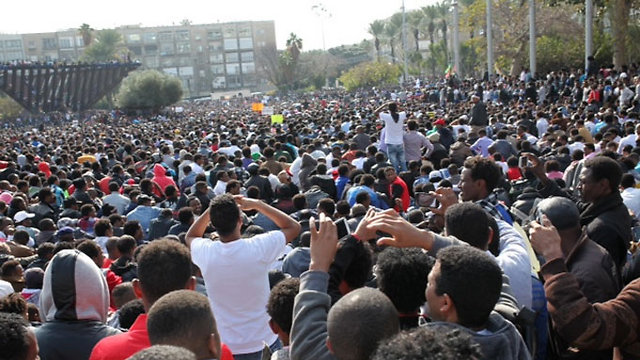 The UN also had no harsh words of Israel's policy, saying that "The current policy and practices create fear and chaos amongst asylum-seekers, not taking into account their specific situation.

"'Warehousing' refugees in Holot is not a solution in line with the 1951 Refugee Convention," the UNHCR said in its statement, appealing the government to consider implementing a more "humane and dignified solution." According to the UNHCR, "asylum-seekers are being labeled as 'infiltrators,' illegal work infiltrators or economic migrants without necessarily taking into account the reasons of why they had to flee from their country of origin." The UN body stressed that "while it is correct that not every asylum-seeker is indeed a refugee, in light of their countries of origin, the majority are either refugees in the sense of the 1951 Refugee Convention or, at the very least, in need of international protection and cannot be returned to their home country." The body further criticized Israel for failing to allow the Africans proper access to "refugee status determination (RSD), irrespective of the location of their residence in Israel. At this stage, only a small number have gone through the RSD process while the majority – particularly Eritreans and Sudanese outside detention – were granted an imperfect form of temporary protection. "It is important to note that asylum-seekers from Eritrea and Sudan show high recognition rates in other countries (in Europe, the recognition rates are more than 70%)." According to the UN body, its office has "received various queries and complaints on the latest practice of arresting asylum-seekers whose visas have expired, either because they were not aware of the new legal framework or they tried but were not successful in renewing the visa (a visa is only renewed in one of the four local offices of the Ministry of Interior twice a week in the afternoon)." According to the statement "the current practice leads to hardship and suffering. Families are split whereby the breadwinner is put in detention, and family members, including pregnant women and minor children, are left to fend for themselves. "Asylum-seekers report that they are afraid of going into the street for fear of being arrested or they are afraid of not being able to come home from work." Gilad Morag contributed to this report