A soccer shirt is igniting a war of words between Chile's Jewish and Palestinian communities, after a local club brought politics to the football field and offended the country's Jews.

The Palestino soccer club of Chile's first division, which was founded in 1920 by a group of Palestinian immigrants, beat Everton over the weekend with result 4:0.

But what most viewers will remember from the match is the players' new jersey, whose design was slightly changed in favor of a political message.

Many are outraged because shirts that include the number "1'' show the numeral in the shape of Israel and the Palestinian territories, implying all the land is Palestinian and basically ignoring the foundation of the State of Israel in 1948. 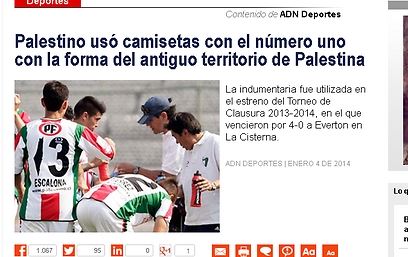 Palestino players and the new shirt (Photo from AND website)

Gerardo Gorodischer, president of Chile's Jewish community, told The Associated Press that the group is demanding an apology from the club and asking Chile's soccer association not to allow the shirts because they don't recognize the Israeli state.

"Irresponsible managers from the Palestino club carried out a move against Chile's entire Jewish community," Gorodischer wrote on Twitter.

"This is a black day for Chilean soccer and I expect the Palestino team to be punished."

Chile's Palestinian Federation said in a statement Monday that it backs the club's choice of the shirt.

The country's Palestinian community is among the world's largest, with about 350,000 immigrants and their descendants.