Which Arab countries will survive 2014?

Analysis: War between Islamic movements and Arab armies could be decided this year. Otherwise, countries like Syria, Iraq and Yemen may fall into anarchy or split between Sunni and Shiite areas

The Arab Spring, which began in 2011, went by like a short transition season, and the Arab revolutions turned in the course of the past two years from a popular social protest against the Arab regimes' tyranny into a wave of internal battles and civil wars.

One can assume that the Arab street expected completely different results and pinned many hopes on the wave of protests flooding the Middle East, after Mohamed Bouazizi set himself on fire in Tunisia. I doubt whether the young people who took to the streets imagined that political Islam would "steal" the revolutions in 2012 and use them to build up strength and even rise to power in Egypt and Tunisia. 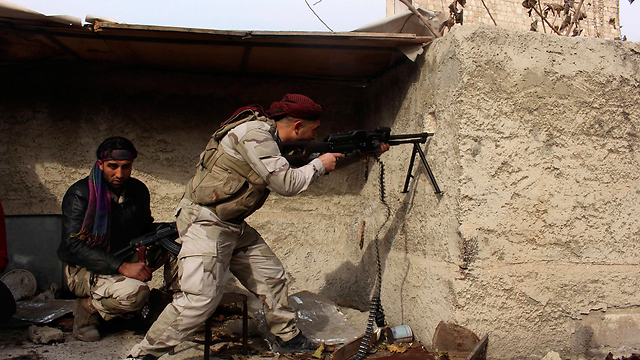 The radical Islamist movements, led by the arms of al-Qaeda, took advantage of the crisis in the Arab world to gain momentum and undermine stability. After the disappointing results of the revolutions came the turn of reaction – an effort made by Arab armies, in Egypt, Syria, Iraq, Yemen and other countries, to restore the old order. The earthquake in the Arab world created rifts which widened immensely in 2013 and may lead to the dissolution of countries and change the Middle East map in the future.

Here is a summary and evaluation of what can be expected in the coming year in the countries where Arab revolutions are taking place.

The quiet popular protest in Syria disappeared in 2012, turning into a war between the rebels and the regime's army.

In 2013, the Islamists built up strength at the expense of the Free Syrian Army. Al-Qaeda and the Salafi organizations' takeover of the opposition turned President Bashar Assad into the least worst option in the world's eyes and prevented external military intervention.
Syrian Spillover
Al-Qaeda's Middle East revival, courtesy of Syria
News agencies
Al-Qaeda affiliated group active in Syria takes control of Iraqi city only week after detonating blast in Lebanon. 'Governance vacuum in Iraq, Syria and Lebanon has helped al-Qaeda to gain strength in recent years' analyst says
Al-Qaeda's Middle East revival, courtesy of Syria
Ahead of the Geneva II conference, scheduled to take place in late January, all parties to the conflict are attempting to reach some last achievements. There is no doubt that Assad's survival and success in scoring military victories with the help of Hezbollah serve as a serious blow to the Sunni axis, and especially to Turkey, Qatar and Saudi Arabia. Indeed, the American threat to strike in Syria led to the chemical weapons destruction agreement, but definitely not to the actual extermination of all the biological and chemical reservoirs of the regime's army. Assad knew very well that the Americans would not help al-Qaeda rise to power in Syria due to the regional ramifications and especially those concerning Israel. 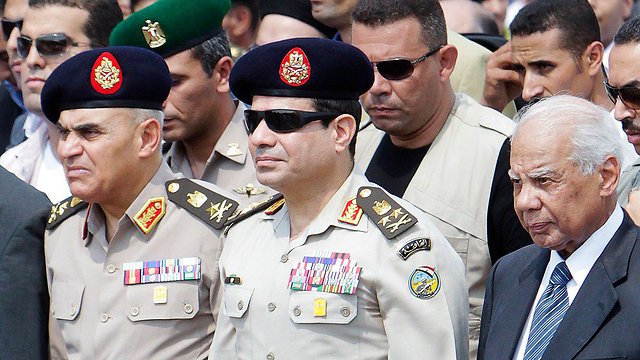 Al-Sisi. Brought old Arab patriotism back to life (Photo: Reuters)
There are zero chances of achieving peace in the upcoming Geneva conference, as there is not even a ceasefire in sight. Saudi Arabia has been trying in recent months to establish a new Sunni opposition force as an alternative to the jihadists and the Free Syrian Army. According to unverified rumors, this force will be organized in Jordan, but its chances of changing the course of the battle in Syria are questionable. Syria is divided today into two regions: The west, which is mostly in the hands of the regime, and the north, which is controlled by Islamist rebels. Despite the achievements of the regime's army, its progress on the ground is slow and the end of the crisis is nowhere in sight.

The past year was marked by the collapse of political Islam. In the summer, the Egyptian army staged a coup which brought the Muslim Brotherhood's failed one year in power to an end. Although the coup was against a government which was allegedly elected democratically, General Abdel Fattah al-Sisi prevented the Muslim Brotherhood's gradual takeover of Egypt.

Continuing Mohamed Morsi's rule would have cause Egypt to deteriorate economically and politically towards a dark Islamic religious state. The relations with Israel would have undoubtedly been undermined had the Muslim Brotherhood managed to rule the army with an iron hand. General al-Sisi's meteoric rise to power brought the old Arab patriotism back to life and reminded the Arabs of the pan-Arab movements of the officers about 50 years ago: The Nasserism and the Ba'ath, but this time without incitement against Israel. These movements were always the most bitter rivals of the Islamic movements. 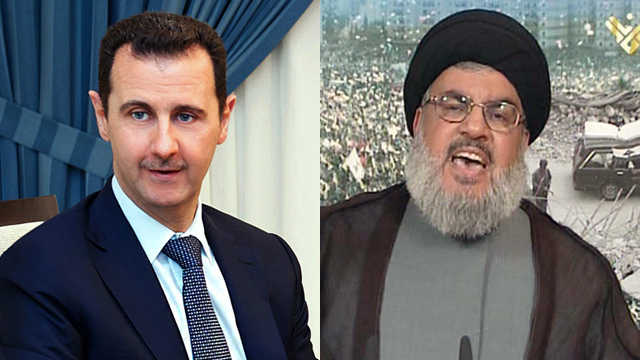 In Syria, Assad took advantage of the nationalist wave to describe his battle and the battle of the Egyptian government as "the Arab armies' war on terror." The Egyptian army's propaganda is indeed increasingly reminiscent of its Syrian counterpart. As far as General al-Sisi is concerned, there is no popular opposition but "armed terror gangs" which threaten the country.

This week, Egypt completed the process of outlawing the Muslim Brotherhood movement, and it is now considered a terror organization. This change serves as a declaration of war against a movement created about 80 years ago, which is deeply rooted in society. The year 2014, therefore, will be marked by a difficult and long battle against the Muslim Brotherhood. Declaring the movement a terror organization has managed to stress out Muslim Brotherhood movements in neighboring countries. In Jordan, the authorities rushed to declare that they have no intention of outlawing the movement and that it will remain a legal opposition as always. Hamas fears that the Gaza-ruling Palestinian organization will be added to the Egyptian terror list because of its affiliation with the Muslim Brotherhood movement. There is no doubt that the President Morsi's ousting and the Egyptian activity to block the tunnels to Gaza contributed significantly to the weakening of Hamas. This process, which is simultaneous to the rise in Mahmoud Abbas' status following the prisoner release, could help advance the Israeli-Palestinian peace process.

The past year was a year of turbulence in the land of cedars: A wave of terror attacks, car bombs and assassinations characterizing the battle between Hezbollah and the Sunni jihad organizations. These phenomena are clear symptoms of the Syrian crisis' spillover into Lebanon. Although the Lebanese army failed to prevent these incidents, it managed to score several significant achievements such as destroying the Sunni Salafi infrastructure in Sidon and assuming responsibility for the barriers in the Shiite areas. 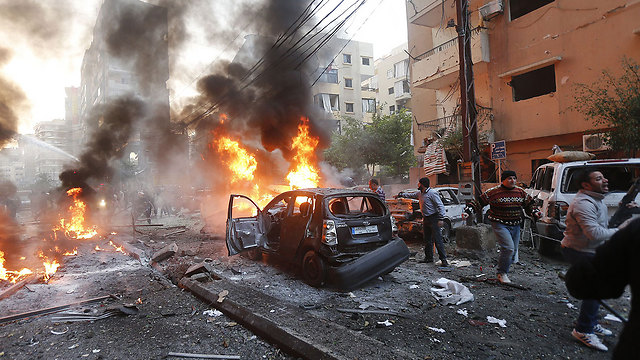 Wave of terror attacks, car bombs and assassinations. Beirut's Dahiya Quarter (Photo: AFP)
Hezbollah's engagement in the Syrian arena allows the Lebanese army to strengthen its hold of the country despite still being an inferior force compared to Hezbollah. Saudi Arabia has spotted the strategic void created after Shiite fighters were dispatched to the Syrian arena, and it has been trying recently to tilt the balance in favor of the Lebanese army. In recent days the Saudi kingdom has granted the Lebanese army as much as $3 billion to purchase weapons from France. The assassination of former Lebanese Finance Minister Mohamad Chatah took the Lebanese people back to the trauma of the murder of Prime Minister Rafik Hariri in 2005. At the time, Saudi Arabia and France had also led the support for the Sunni leaders against Hezbollah and Syria. The Lebanese army's antiaircraft fire at Syrian planes which invaded its airspace indicates a rise in the confidence of the army's headquarters. The Saudi-French support is expected to build up the army's strength at the expense of Hezbollah. But we must remember that although the Hezbollah organization has suffered quite a few losses, its fighters are gaining combat experience in the Syrian arena and will threaten Lebanon's stability if and when they are required to return home.

Ahead of 2013, the wave of Arab revolutions reached Iraq, where it burst strongly following the frustration of the Sunnis in the western part of the country by the Shiite majority's rule led by Nouri al-Maliki. The Iraqi army invested a lot of energy in dispersing protests, using the famous claim of "a war on terror gangs," but had limited success.

The circle of protests was joined by the Sunni tribes which set up a militia against the army forces. The riots contributed to the strengthening of al-Qaeda, which has been initiating terror attacks against the army and Shiite targets almost every day. The long border between Iraq and Syria allows Sunni jihad organizations to transfer equipment and fighters between the two countries. Iran-backed Shiite militias in the east have offered to intervene and help the army oppress the Sunni riots, but have been turned down. Despite its huge dimensions, the Iraqi army does not have enough power to impose order in the split country. The government is concerned that ongoing riots will lead to a situation similar to Syria, in which the country is divided between two areas of control, or similar to Lebanon, where the Shiite militia has gained excess power. 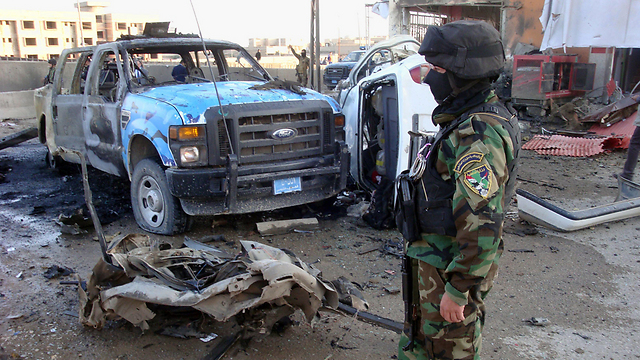 Iraqi army doesn't have enough power to impose order in the split country (Photo: AFP)
Both in Iraq and in Syria, the Kurds are taking advantage of the instability in order to create an autonomic enclave in the northern part of the country. Similar to the situation in Lebanon, Iraq is on the verge of a civil war between Sunnis and Shiites. In addition, the conflict in Iraq has an economic aspect as well. The Sunnis claim that the government is robbing them of the oil in their area, especially in the Kirkuk province, and that the Shiites are smuggling most of the oil located in southern Iraq to Iran.

Similar to Iraq, the Yemeni army which represents the Shiite government (the Zaydi faction) is busy fighting Sunni groups in the south which aspire to disconnect from the state and reestablish southern Yemen. If the army fails to oppress the rebels supported by al-Qaeda, Yemen could split into a Zaydi Sana state in the north and a Sunni Aden state in the south.

It's possible that 2014 will be the year in which the war between the Islamic movements and Arab armies will be decided. If the balance isn’t tilted, many countries may deteriorate to anarchy or to a political split between Sunni and Shiite areas. Unfortunately, the Arab world has already given up on the dreams of the Arab Spring – social justice, democracy, minority rights and religious tolerance. The Arab revolutions have only led to fauda (anarchy) and to fitnah (conflict and factionalism between Muslims).

In countries where the revolution has been curbed – like Jordan, Algeria, Morocco and Saudi Arabia – the populations have maintained their standard of living. The revolutions in Libya, Tunisia, Egypt, Syria and Iraq did not put an end to the government corruption and tyranny and highly increased poverty.

According to a famous Islamic principle, an exploiting government is better than anarchy. The Koran warns that "fitnah is worse than murder," as it leads to mass killing. The Arab society is tired of wars and is left exhausted and bleeding. Most citizens in Arab countries are hoping for only one thing now – to see peace and quiet return to the streets and to go back to a normal life.