Ukraine to cash in on Jewish pilgrims?

VIDEO - The Breslov Hasidic movement is up in arms in recent days following a bill submitted to the Ukrainian parliament, suggesting that visitors to the tomb of Rabbi Nachman in the city of Uman will be charged a fee.

According to the Hasidim, the proposed law is an attempt to extort the tens of thousands of Jewish worshippers visiting the site every year, knowing that they will arrive at the place at any cost.

Moreover, sources in the Hasidic movement are pointing a finger at certain elements within the group that allegedly pushed for the law in order to receive franchise rights to operate the site.

According to the bill submitted to the parliament last week, the gravesite of the Breslov Hasidic movement's founder will be fenced and restricted, and visitors will have to purchase a magnetic card for about $100 a day to enter the site. The income from the card sales will be used to fund security, rescue and sanitation services. 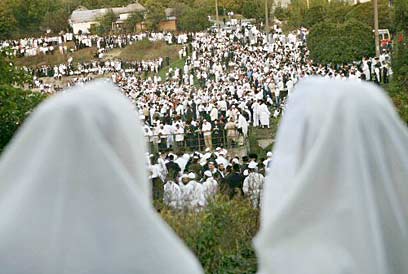 As far as the Hasidim who travel to the site on the Jewish New Year are concerned, this is a significant expense of hundreds of dollars per person, in addition to the plane ticket and accommodation which are also very expensive. According to the worshippers, each Hasid spends an average of five days at the gravesite, and so the cost of the religious ritual could reach thousands of shekels.

Breslov Hasidim already preparing to fight the bill, but are pointing a finger not only at the lawmakers but also at elements within the Hasidic movement, who they say are trying to work together with the State in order to make huge profits without any justification.

One of the Hasidim, who lives in Uman, told Ynet that Breslov rabbis and public activists had discovered the financial potential in having the state operate the place, and they are the ones who suggested that the parliament members initiate the move, hoping that they would one day become franchisees responsible for operating the site. "In Israel, after all, no one would think of charging a fee, for example, for visiting the grave of Rabbi Shimon Bar Yochai on Mount Meron," he said. "Here too there should be freedom of religion and freedom of ritual. Unfortunately, some of my best friends are in on this scheme. They want to take over the entire Breslov." He said the matter was particularly outrageous due to the fact that "the Ukrainian government has not invested and won't invest even one penny in improving the infrastructure here, or in any other thing in favor of the Hasidim. In the meantime it is only making a nice profit off our stay, especially during the year's busy periods – and now it's not settling for that, and wants to impose additional taxes on us."

On the other hand, one of the Hasidim accused by his friends of working behind the scenes to advance the legislation told Ynet that he had only heard about it by word of mouth in the past day. He suggested that it was just a "spin" created by his opponents.

After seeing the proposal on the Ukrainian parliament's official website, he said he was against it. Shimon Buskila, CEO of the World Breslov Center in Uman, promised to try to get the bill off the Ukrainian parliament's agenda in every way possible – in meetings with its initiators, by appealing to human rights organizations in the country and in Europe, and more. "The proposal is in violation of basic laws like human dignity and liberty," he stated.