Peres: Kerry came to make peace, not fight with us

Following talk of possible future boycott, cabinet ministers lashing out at US Secretary of State John Kerry, President Peres attempts to make peace deal of his own between the Americans and Israeli hawks

"We thank (Kerry) for his efforts. We encourage him and hope to soon achieve positive results," Peres said in remarks broadcast on military radio after two days of verbal attacks against the US secretary of state by Israeli cabinet ministers. 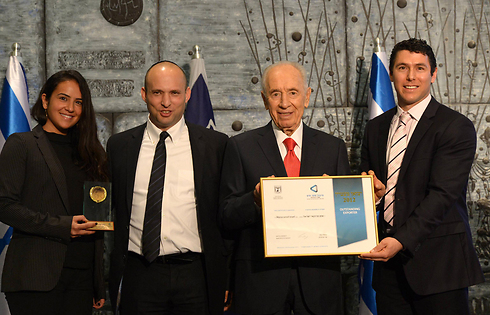 The outburst occurred after Kerry warned on Saturday that Israel was facing a growing campaign of delegitimization, which would worsen if peace talks collapsed, referring also to "talk of boycotts."

Cabinet ministers were quick to lash out, describing Kerry's comments as "offensive, unfair and intolerable," and implied Washington was not doing enough to counter "anti-Semitic boycott attempts."

The US State Department hit back, flagging Kerry's "staunch opposition" to boycotts, and urging his critics to get their facts straight.

On Monday, Prime Minister Benjamin Netanyahu sought to calm the situation by acknowledging Kerry's opposition to boycotts and warning his right-wing Likud faction against "personal attacks."

But late on Monday, US President Barack Obama's National Security Adviser Susan Rice also weighed in on the dispute in several postings on Twitter.

"US Govt has been clear and consistent that we reject efforts to boycott or delegitimize Israel."

Last month, Kerry was subjected to a personal attack by Defense Minister Moshe Ya'alon, who accused him of having a messianic "obsession" with Middle East peace, before being forced to apologize.

The spat underlined the estrangement between the longtime allies, which has already seen angry public rows over Iran policy and Israel's defiant drive to expand its settlements in the midst of nine-months of peace talks, which are due to end in April.