Schulz and Edelstein
Photo: Courtesy of the Knesset

Schulz pledges EU loyalty to Israel, but Bennett storms out over 'lies'

European Parliament President Martin Schulz told the Knesset on Wednesday that the European Union would always stand by Israel's side, in a speech that touched on the importance of remembering the Holocaust, and his own personal perspective of the crimes of his homeland Germany during World War II.

But his comments on living conditions for the Palestinians prompted a mass walk-out by members of the religious-nationalist Bayit Yehudi party.

Party leader Naftali Bennett later took to Facebook to explain that most of his faction had left due to Schulz' "lies" about Palestinian water allocations, and his use of the word "siege" in relation to Gaza.

"I call on the prime minister to demand an immediate correction in the name of honor of the State of Israel," Bennett wrote in the second of two posts on the issue. Earlier, he wrote: "I will not accept an untrue sermon on morality directed at Israel in Israel's parliament. Definitely not in German."

Schulz gave his speech to the packed House, after he was welcomed by Knesset Speaker Yuli Edelstein, who hailed the importance of political, scientific and cultural ties between Israel and the European Union.

"The Arab Spring led to crises in the reigon that pose new challenges to both the EU and Israel," Schulz said. He added however, that together the EU and Israel "can deal with the changes."

The president devoted a great part of his speech to the ongoing peace process between Israel and the Palestinians, under the auspices of US Secretary of State John Kerry.

"Peace can only be achieved by the Israelis and Palestinians," Schulz said. He said, however, that Europe would "support this long road to peace that necessitates hard concessions on both sides." 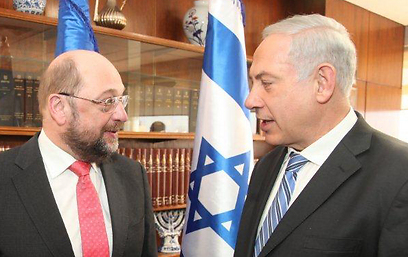 Schulz and Netanyahu (Photo: Courtesy of the Knesset)

He mentioned the two European-led peace efforts – the Madrid Conference in 1991 and the 1993 Oslo Accord, which he called "unfulfilled hopes."

"Palestinians, like Israelis, want to live in their countries with freedom of movement and no limitations. The Palestinians have the right to self-definition and justice," Schulz said. 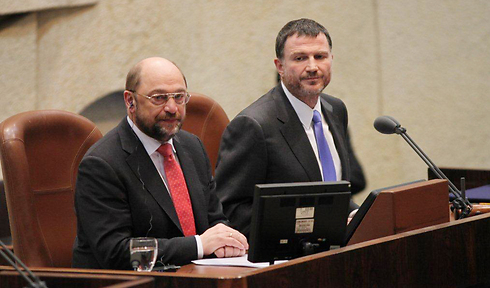 Schulz and Edelstein (Photo: Courtesy of the Knesset)

"When the goal is the two-state solution, Israel's security will undoubtedly be on the agenda,"Schulz told the Knesset. "I'm sure an army can bring calm, but I don't think it can bring peace. Ariel Sharon RIP said something I agree with – you cannot have a Jewish democratic state and at the same time rule it all."

But his comment on Gaza, in which he said that "the Gaza siege leads to hard economic conditions that do not allow growth", triggered the furious response from the Bayit Yehudi MKs. 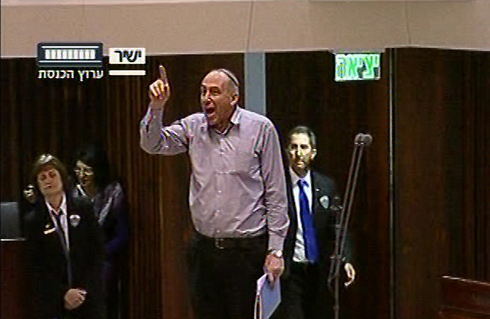 The European leader spoke in German, causing far-right Likud MK and Deputy Knesset Speaker Moshe Feiglin to announce on Facebook that he would not be attending the special parliamentary session.

"I see no value in having the parliament of the Jewish state hear a speech in the language used to force our parents onto trains and into furnaces," Feiglin wrote.

Schulz himself acknowledged the awkwardness of his mother tongue, and thanked the Knesset for allowing him to do so.

In his welcoming address, Edelstein raised Israeli concerns over the new rise of anti-Semitism in Europe, citing the examples of Hungary and Greece, which have seen growing support for their far-right parties. But, warned Edelstein, "they are not alone and they are not on the sidelines."

The speaker also raised the issue of Catherine Ashton's statement to mark International Holocaust Remembrance Day last month, which did not mention the catastrophe that befell Europe's Jews at all.

He referred as well to the increasing opposition in Europe to the practice of circumcision, a vital ritual in the Jewish faith. He warned that this opposition posed a danger to freedom of religion, and urged the EU to work to guarantee the right to practice one's religion freely.

On Tuesday, Schulz said in Jerusalem that the European Union had not and would not boycott Israel.

"There is no boycott," he said. "In the European Parliament there is for sure not a majority for a potential boycott.”

Schulz also told Opposition Leader Isaac Herzog that the boycott moves against Israel in Europe were not political, adding that "Israel's problems in Europe is with the business sector." He insisted that, "there will not be a decision in Europe to boycott Israel."

Schulz was also due to meet Wednesday with Prime Minister Benjamin Netanyahu. On Tuesday he received an honorary degree from the Hebrew University of Jerusalem.