Israeli-Arabs targeted in additional 'price tag' attack. The words 'buy just from Jews' and 'price tag' were spray-painted on a planet nursery just a month and a half after the adjacent nursery was targeted

For the second time in a month and a half, unknown vandals launched a 'price tag' attack on Thursday in the Arab town of Kfar Qassem. The words "buy just from Jews" and "price tag" were spray painted on a plant nursery in the town and property worth thousands of shekels was destroyed. 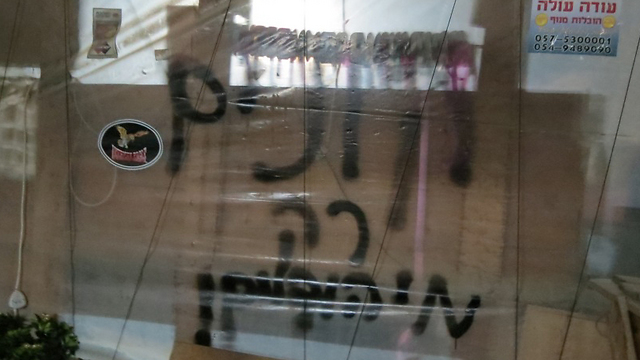 Last months some 30 fruit trees and other plants were destroyed in the adjacent nursery in the town. At the time, a sign reading "hello from Ash Kadosh" – a radical West Bank outpost – was hung on the vandalized trees.

Workers at the nursery arrived at work and discovered the damage and called the police. On Tuesday, some 30 cars had their tires slashed and anti-Arab graffiti was daubed on walls of a village in East Jerusalem, in yet another "price tag" attacks by far-rightist Israelis.

Jerusalem Police began investigating the attack in the Arab village of Sharafat, close to Jerusalem's Gilo.

The phrases "No coexistence" and "Arabs = thieves" were sprayed on walls of the village. The attacks were discovered Wednesday morning.

Village residents called the police when they discovered the vandalism, and officers were dispatched to the scene to gather evidence.

Three masked assailants carrying backpacks entered the village at around 3am that day, security camera footage obtained by Ynet shows. One of the men appears to be giving directions to the other two.

The footage shows them heading toward the home of the head of the village, and then making their way down the street to attack the cars.

At the beginning of the month, Yehuda Landsberg, Benjamin Richter and Yehuda Savir – three residents of the Havat Gilad settlement outpost – were charged with planning and executing price tag operations in the Samarian Palestinian village of Far'ata.

According to the indictment, the three arrived three months ago at the Palestinian village, set two Palestinian-owned vehicles on fire and sprayed Stars of David on nearby walls. Substantial damage was caused to the two cars that were torched.

"The forbidden actions of the group members were performed due to nationalistic motives and out of hostility towards the Arab public," the indictment reads.

The three, aged 22-25, were defined by the Shin Bet as radical right-wing activists, and two of them were previously affiliated with other violent acts.

January saw the UN condemn such attacks, pointing a blaming finger at Israel for failing to curb the phenomena. According to the UN, Israeli security forces have largely failed to stem the attacks in which assailants cut down trees, deface mosques and beat Palestinian farmers. Israeli leaders have repeatedly denounced such attacks – Defense Minister Moshe Ya'alon branded them "outright terrorism" – and the military says soldiers are under strict orders to stop them.

Still, critics say the Israeli governments have often been reluctant to confront settlers, even those seen as a hard-line fringe.

"There is not enough pressure from the prime minister, the defense minister, the interior minister to prevent this," said Gadi Zohar, a former senior army commander in the West Bank.