American-Israeli prisoner killed at Rimonim jail after shooting guards, barricading himself in

Samuel Sheinbein had been serving life for murder; three guards hurt, one in critical condition, after he opened fire in a prison bathroom.

An American-Israeli prisoner serving life for murder was shot dead at a central Israel jail Sunday after he seized a gun and opened fire on three guards, before barricading himself in a prison bathroom. Samuel Sheinbein was killed when elite troops entered the bathroom at Rimonim prison to bring the situation to an end.

Two of the guards, aged 30 and 35, were in critical and serious condition respectively, and the third, aged 40, sustained light wounds. All three were taken to Meir Hospital in Kfar Saba. 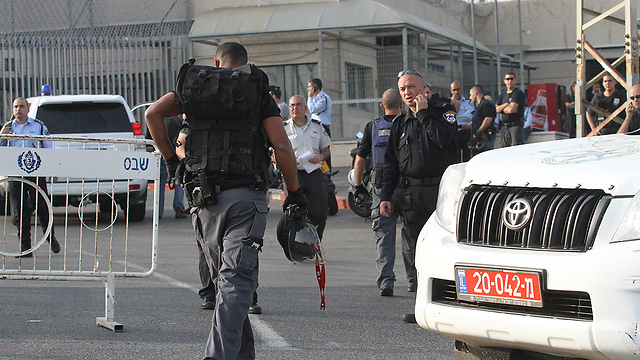 Police Special Central Unit forces entered the bathroom in order to overpower Sheinbein, who had been serving a 24-year sentence for murder. He was seriously wounded and died soon after, despite medical attention. Another guard was lightly wounded during the operation.

The Israel Prison Service has begun an investigation, with a focus on how Sheinbein acquired the gun. The deputy head of the Prison Service, Eli Gabison, stressed that Sheinbein had not seized the gun from a prison guard. Security measures at the jail are tight, with only authorized guards allowed to carry weapons inside the facility.

Some two weeks ago, Sheinbein, who was out of prison on a furlough, contacted a man he met online and who had offered to sell him a gun. The two met and decided to travel to Ramle to purchase the gun and ammunition. After procuring the gun, en route to the ammunition store, Sheinbein opened the car door and attempted to flee.

The seller managed to catch up with Sheinbein and grab hold of him. The police were alerted to what seemed to be a small time theft attempt, but were then shocked to discover that the suspect was a prisoner serving a long sentence for murder.

Sources within the IPS told Ynet that the Prisoner Service had in the past avoided allowing Shienbein to take furloughs, but after the prisoner petitioned the court, they were forced to permit it.

Sheinbein, then 17, had fled to Israel in 1997 with the help of his father, attorney Sol Sheinbein, after fleeing a murder charge in Maryland, and began the naturalization process in Israel.

The US subsequently began efforts to extradite Sheinbein, by then an Israeli citizen. Then-US Secretary of State Madeleine Albright demanded "maximum cooperation" from Israel, and the fight over his extradition even lead Congress to threaten to withhold aid from Israel.

Jerusalem Magistrate's Court ruled that Sheinbein should be extradited, on the grounds that he had not been resident in Israel for long enough. But Sheinbein appealed, and the Supreme Court blocked his extradition, placing further strain on US-Israeli ties.

Sheinbein was eventually indicted in Israel for murder, and accepted a plea bargain including a 24-year prison sentence.

Rimonim, along with Hasharon and Hadarim, forms the Sharon prison. The prison is relatively new, and adheres to high security criteria. Its prisoners include Yitzhak Rabin's assassin Yigal Amir and notorious mobsters Zeev Rosenstein and Avner Harari.