The masks date to the Neolithic period
Photo: AP

Eleven stone masks discovered in Judean desert, dated 9,000 years ago, are believed to be oldest of their kind, fashioned at critical turning point in history of civilization.

The oldest known masks in the world went on display in Jerusalem on Tuesday in the largest-ever exhibit of the ghoulish faces, believed to have been created in the Holy Land thousands of years before the time of the Bible.

The 11 stone masks, said to have been discovered in the Judean desert and hills near Jerusalem, date back 9,000 years and offer a rare glimpse at some of civilization's first communal rituals.
Ancient Town
2,300-year-old village discovered near Jerusalem
Second Temple-era rural town first found six months ago during construction of a gas pipe line, has been under excavation since.
http://www.ynetnews.com/articles/0,7340,L-4489754,00.html
"It's quite exciting," said James Snyder, director of the Israel Museum, which is hosting the seven-month exhibit. "When you go back to objects that are this old, that are so much before the theology that becomes Judaism, Christianity and then Islam, to feel that there is a kind of a connection, that this is all part of a continuous story, is something that is pretty thrilling." The masks are thought to have been fashioned to look like skulls, and each one has its own personality. Some have round cartoon-like holes for eyes, others flash a grin of tiny teeth. One elongated mask bears a resemblance to that of Hollywood villain Hannibal Lecter of "Silence of the Lambs."

The masks have long been an enigma. Most of the artifacts had made their way into the hands of private collectors over the past several decades, so it took 10 years of carbon-14 testing and comparison to similar masks discovered in documented Israeli excavations for experts to determine their authenticity and origin. 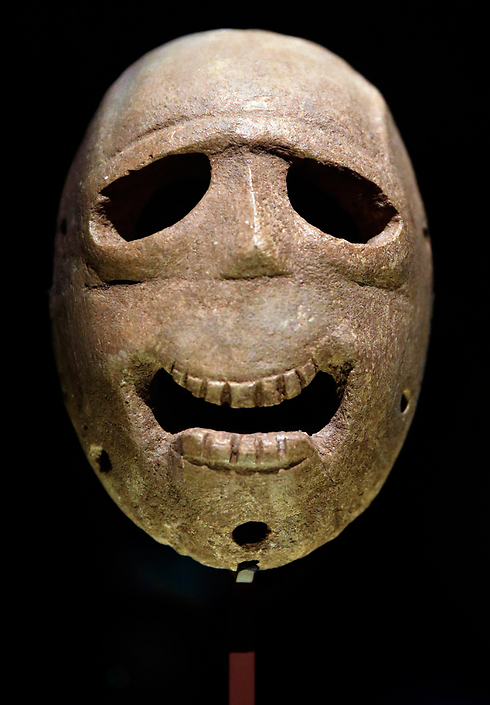 The stone masks are thought to have been made to look like the skulls of dead ancestors, used in civilization's first public ceremonies (Photo: AP)

Iain Morley, a professor of paleoanthropology at Oxford University, said the items are believed to be the oldest of their kind. "I don't think there's anything that early from other parts of the world that you can say is a mask," said Morley, who is not involved in the exhibit.

In the past few weeks, researchers say they have resolved one of the masks' mysteries. Computer simulation tests conducted at Hebrew University in Jerusalem have led experts to conclude that many of the masks may have been worn on people's faces, not tied to structures at ritual sites as was previously thought.

The masks date to the Neolithic period, before the invention of writing. But the tradition of mask wearing is apparently even older.

Cave drawings dating back 25,000 years depict people wearing animal masks, said exhibit curator Debby Hershman. But actual masks from this time have not been found, possibly because they were made of biodegradable materials that disintegrated over time.

The stone masks were fashioned at a critical turning point in the history of civilization, when humans in the Fertile Crescent abandoned the hunter-gatherer lifestyle and became farmers, Hershman said. The Jerusalem region was one of the main centers of the agricultural revolution.

"It's the most important revolution that ever happened," Hershman said. The people who fashioned the masks, she said, "are actually the founders of civilization." 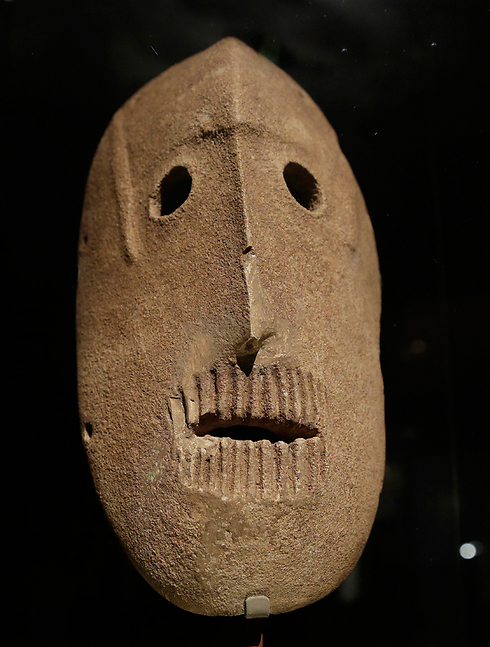 Agricultural communities needed to reinforce their societal bonds to maintain their connection to the land and each other, so they began performing ritualistic rites, researchers believe. The stone masks are thought to have been made to look like the skulls of dead ancestors, used in civilization's first public ceremonies.

How these 11 stone masks were brought together for this exhibit is something of a detective story.

The Israel Museum owns two of them – one discovered in an Israeli excavation, and another from the personal collection of the iconic general and politician Moshe Dayan, an antiquities enthusiast who autographed his name on the back of the mask. Dayan died in 1981. 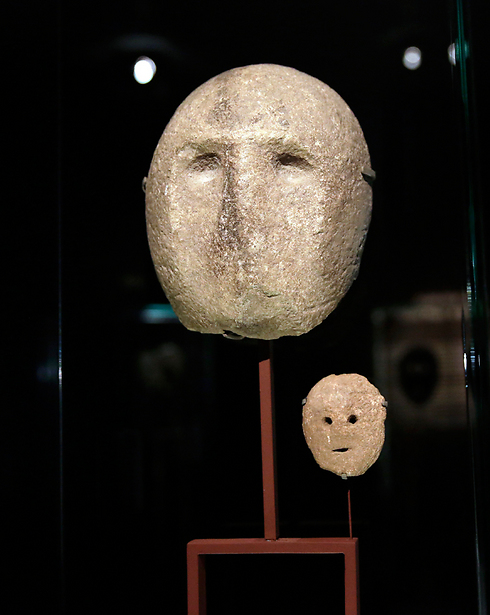 Photo: AP
Hershman, the museum's prehistory curator, said she was rummaging through the Israel Museum archives when she stumbled upon three photos of other Neolithic stone masks she had not recognized, labeled as belonging to an anonymous private collection. Hershman said Snyder, the museum's director, began to inquire with collectors around the world to try to track down the masks. That search led to Judy and Michael Steinhardt, prominent New York collectors of Judaica and antiquities, who said they owned a hoard of similar masks and agreed to loan them to the museum for research and display. "The masks represent a near eternal visage, their stone substance both powerful and quiet," said Judy Steinhardt in comments that appear in the exhibition catalogue. "Michael and I have lived with these masks for the past 25 years and we love spending quiet hours in our library together surrounded by these evocative works." According to Hershman, there is one other mask of this age on display in the world, at the Bible et Terre Sainte museum in Paris. Hershman said that mask features color pigment that is too brittle for the mask to have been shipped for display in Jerusalem. In the Israel Museum exhibit, the masks are mounted in slender glass cases and at eye level for visitors to peer through the masks, as if they were wearing them. The museum is encouraging visitors to photograph "selfie" snapshots with the masks.