In letter to PM, MKs say 'keeping Jewish prisoners in jail as opposed to releasing Arab prisoners is discrimination.'

Other MKs who signed the letter were Shuli Moalem-Refaeli and Zvulun Kalfa from Bayit Yehudi, Israel Katz, Shimon Ohayon and Robert Ilatov from Likud-Yisrael Beiteinu and most of the MKs from haredi parties Shas and United Torah Judaism.

"The Israeli Government has released hundreds of terrorists in recent months and will release more in the coming year. Needless to say how painful it is for us to watch these terrible people, who hurt so many Israeli families, go free, but keeping the Jewish prisoners in jail constitutes a policy of discrimination towards them," said in the letter. 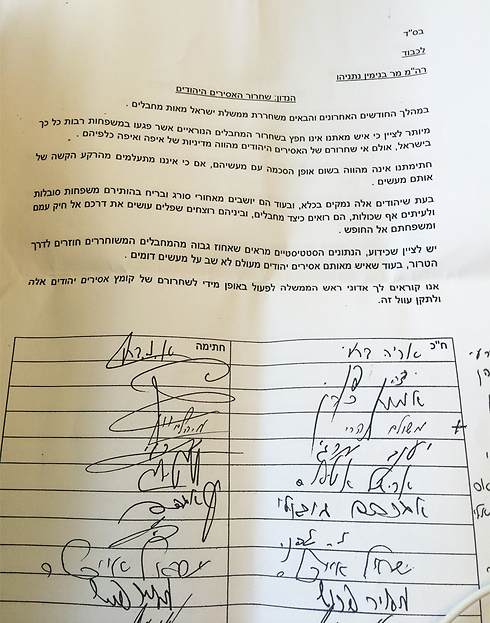 The MKs stressed that their signature on the letter doesn't mean they agree with the Jewish prisoners' actions and added, "We don't ignore the severity of their actions, however, while these Jews rot in prison, leaving behind broken families, they watch how terrorists with blood on their hands make their way back to their families and back to freedom."

The letter also indicated that "high percentage of the released Arab terrorists return to terror activity while "Jewish prisoners have never repeated their actions. We call you Prime Minister Netanyahu to right that wrong and release this handful of prisoners."