The past week saw Kerry dive head-first into a frenetic tour of high-stakes diplomacy, replete with midair changes in flight plans and an astonishing amount of the seat-of-the-pants decision-making.

RABAT, Morocco - More than a week into what was supposed to be only a five-day trip to Europe and Saudi Arabia, US Secretary of State John Kerry sat in a Paris hotel suite contemplating his next moves on multiple crisis fronts.


It was Monday morning, and despite an emergency meeting with his Russian counterpart the night before, Moscow was still massing troops on Ukraine's border. And the Israeli-Palestinian peace process was teetering on the brink of collapse.

Expected in Brussels on Tuesday for a NATO meeting on Ukraine, Kerry huddled with aides and spoke with his Mideast negotiators as well as Israeli and Palestinian leaders. After several hours of agonizing, he pulled the trigger on a move he'd been contemplating for 48 hours: NATO could wait; he would fly to Israel in a last-ditch bid to salvage the peace talks.

It was just one in a series of abrupt decisions that turned a routine trip abroad to accompany President Barack Obama to the Netherlands, Italy and Saudi Arabia into a frenetic tour of high-stakes diplomacy, replete with midair changes in flight plans and an astonishing amount of the seat-of-the-pants decision-making that already has come to define Kerry's 14-month tenure as secretary of state. Not one to decline a challenge, Kerry has never shied away from last-minute changes of plans. His record is still very much a work in progress. Ukraine and the Israeli-Palestinian peace talks aside, major issues, including the Iran nuclear negotiations, the conflict in Syria, the fate of US troops in Afghanistan, North Korea's growing belligerence and China's increasing assertiveness all remain unresolved.

But even his harshest critics cannot question his zeal for the job and his willingness to throw his life, the lives of his staff, the State Department traveling press corps and the crew of his plane into turmoil to try to extinguish foreign policy fires in person and at the drop of a hat. 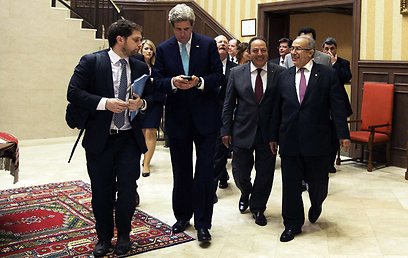 Willing to throw the lives of his staff into turmoil to try to extinguish foreign policy fires (Photo: Reuters)
Rewind from Monday in Paris: Eight days earlier, on Sunday, March 23, Kerry departed Andrews Air Force Base near Washington with a small team of staff and security for The Hague, where he would meet up with Obama at a nuclear security summit and hold meetings of his own, including with Russian Foreign Minister Sergey Lavrov. (Kerry's remaining security detail and the traveling press would depart the following day on a larger plane to meet him in the Netherlands.) The plan was for Kerry to roughly follow Obama's schedule through Europe and then to Saudi Arabia, flying separately, and then to return home. Straightforward and uncomplicated, it was not to be. As soon as the Diplomatic Security agents and journalists on Kerry's nearly empty, converted Air Force 757 touched down at Amsterdam's Schipol International Airport on Tuesday morning, the itinerary was unraveling. Instead of flying immediately to Rome, where he hoped to meet Israeli and Palestinian negotiators on Wednesday while Obama traveled to Brussels, Kerry delayed his departure from the Netherlands to attend a meeting of the president's top national security advisers in The Hague. Then, unable to arrange the negotiators' meetings in Rome, he flew from there to Amman, Jordan, to see Palestinian Authority President Mahmoud Abbas. While Obama was in Brussels on Wednesday warning Europe of the dangers of Russia's intervention in Ukraine, Kerry was in Amman trying to persuade Abbas not to walk away from the table with the Israelis, who were refusing to release a batch of prisoners under the agreement that both sides reached last year to negotiate a settlement by the end of April. After the Abbas meeting and several phone conversations with Prime Minister Benjamin Netanyahu, Kerry spent Wednesday night in Jordan. But, eager to join Obama and his meeting with the pope, he scheduled a predawn departure for the four-hour flight to Rome on Thursday. With most of Thursday and another night in Rome under his belt, Kerry accompanied Obama on Air Force One to Riyadh, Saudi Arabia, on Friday, with plans to return home the next day on his own plane. It would be Riyadh to Washington via Shannon, Ireland, where his plane would have to refuel. Easy. But developments in the Middle East and on Ukraine were to intervene. In Riyadh, Obama received an unexpected phone call from Russian President Vladimir Putin proposing that Kerry and Lavrov meet again to discuss a possible diplomatic resolution to the Ukraine crisis based on what the two foreign ministers had discussed in The Hague four days earlier. With the where and when of the Lavrov meeting still undetermined and the Israeli-Palestinian peace process on the line, Kerry left Riyadh on Saturday. But he was not heading to Shannon to refuel as originally planned. He was going to Ramstein Air Force Base in Germany, a destination closer to both the Mideast and a potential Lavrov meeting venue, in case quick changes needed to be made. In midflight, though, it was determined that Ramstein was unsuitable because Air Force One, carrying Obama from Riyadh to Washington, would also be stopping there, causing major security delays. Kerry's flight plan was changed back to Shannon. Yet Washington was still the final destination. Shortly before landing in Shannon, however, Kerry decided he would be better placed in Paris for the weekend to see Lavrov, make a possible trip to the Mideast, and then go straight to Brussels for the NATO meetings the following week. In Paris, Kerry saw Lavrov on Sunday night at the residence of the Russian ambassador to France It was an inconclusive meeting that left little doubt that Washington and Moscow remained deeply at odds on Ukraine. Yet there was a lot of doubt about the Israelis and Palestinians. A Saturday deadline for the Palestinian prisoner release had passed and Abbas was threatening to walk away from the peace talks. On Monday morning in Paris, Kerry gathered his staff at the hotel to talk about whether to go to Israel and the West Bank. A potential 10 am departure time came and went without a decision. Another two hours would pass before Kerry finally decided he needed to talk with Netanyahu and Abbas in person. Off he flew. As Kerry arrived in Jerusalem on Monday evening, reports began to circulate that the US, after years of flat refusal, was considering the early release of convicted American spy Jonathan Pollard in exchange for Israeli concessions in the peace process. The Pollard stories swirled as Kerry and Netanyahu discussed the situation in a meeting that dragged on for far longer than expected and forced the cancellation of Kerry's trip to the West Bank for his talks with Abbas. No matter, US officials said: After flying to Brussels for the NATO meeting on Ukraine on Tuesday, Kerry would return to the Middle East on Wednesday to see Abbas. Again, developments intervened. Shortly before Kerry was to hold a news conference at NATO headquarters, Abbas angrily accused Israel of stalling on the prisoner release and announced that the Palestinians would seek greater recognition from the United Nations, something they had agreed not to do for the period of the negotiations. The speech landed like an unexpected bombshell among the US team, throwing the peace process into grater uncertainty, and Kerry decided to cancel his return to the region. Instead, aides said he would wrap up his already oft-extended journey with stops in Algeria and Morocco on Thursday and Friday. In Algiers on Thursday morning, Kerry called for both Abbas and Netanyahu "to lead" and not abandon the talks. But as he arrived in Rabat that night, the talks remained in clear danger of failure and the possibility of a return to the Mideast appeared plausible. Kerry aides said they were confident he would return home on Friday.