In the Chinese city of Kaifeng, members of the ancient Jewish community could recently be heard singing in Hebrew, the traditional song from the Passover Hagaddah, V’hi She’amda, led by the Kaifeng community cantor, Ram, in preparation for their first Passover Seder.


Nearly 100 members of the ancient Jewish community of Kaifeng are expected to attend a first-of-its-kind traditional Passover Seder that will take place on Monday.

The Seder, which is being sponsored by the Jerusalem-based Shavei Israel organization, will be conducted by 28-year-old Tzuri (Heng) Shi, who made aliyah to Israel from Kaifeng a few years ago with the help of Shavei Israel and completed his formal return to Judaism last year.

As part of the preparation for the upcoming Seder, Tzuri was sent to Kaifeng by the Shavei Israel organization with all of the traditional Passover items including Kosher Matzah packages from Israel, Kosher for Passover wine, traditional Charoset and horseradish, as well as Passover Haggadahs. The Haggadahs were prepared especially in Hebrew and Chinese. 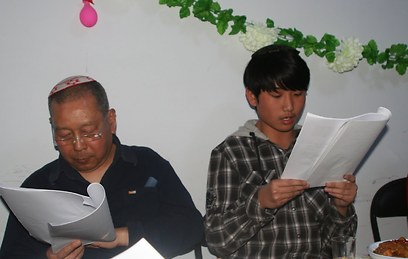 "We are proud and excited to organize this historic event," said Shavei Israel Chairman and Founder Michael Freund. "Kaifeng's Jewish descendants are a living link between China and the Jewish people, and it is very moving to see the remnants of this community returning to their Jewish roots as they prepare for Passover," he added.

Scholars believe the first Jews settled in Kaifeng, which was one of China's imperial capitals, during the 8th or 9th century. They are said to have been Sephardic Jewish merchants from Persia or Iraq who made their way eastward along the Silk Route and established themselves in the city with the blessing of the Chinese emperor.

Kaifeng also houses China’s oldest known synagogue. In 1163, Kaifeng's Jews built a large and beautiful synagogue, which was subsequently renovated and rebuilt on numerous occasions throughout the centuries. At its peak, during the Ming Dynasty (1368-1644), the Kaifeng Jewish community reached its height of 5,000 people with rabbis, synagogues and Jewish institutions. But widespread intermarriage and assimilation, as well as the death of the community's last rabbi two centuries ago, brought about its demise by the middle of the 19th century. 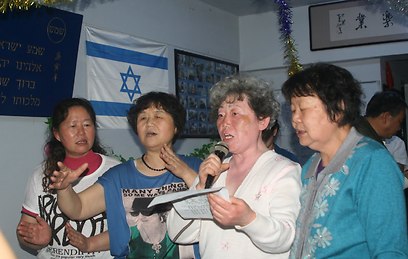 The community was then forced to sell the synagogue and Torah scrolls, according to Shavei Israel’s website.

Nevertheless, many of the families sought to preserve their Jewish identity and pass it down to their descendants, who continued to observe various Jewish customs. Currently, there are estimated to be between 500 to 1,000 identifiable Jewish descendants in Kaifeng. “In recent years, many members of the community have begun to explore their heritage – thanks in part to the Internet, which opened up new worlds for them and provided access to information about Judaism and Israel that was previously inaccessible to them,” Freund noted. Freund is the founder of Shavei Israel, a non-profit organization that aims to reconnect descendants of Jews from around the world with the people and State of Israel. The organization provides assistance and Jewish outreach programs to a wide range of communities including the Bnei Menashe of India, Bnei Anousim in Spain, Portugal and South America, the Subbotnik Jews of Russia as well as the Jewish community in China.