Haredi protest arrest of draft dodger in Jerusalem and Bnei Brak, clashing with police in latest in string of violent enlistment-related haredi protests.

Some 500 haredi men gathered in in Jerusalem and Bnei Brak Thursday, to protest the arrest of a religious man for refusing to enlist for national service.

The protesters in both cities blocked main traffic arteries, preventing cars and buses from entering the Shabbat Square in Jerusalem and Jabotinsky street in Bnei Brak. In Jerusalem protesters set fire to trash cans in the area, and threw stones and glass bottles at police. 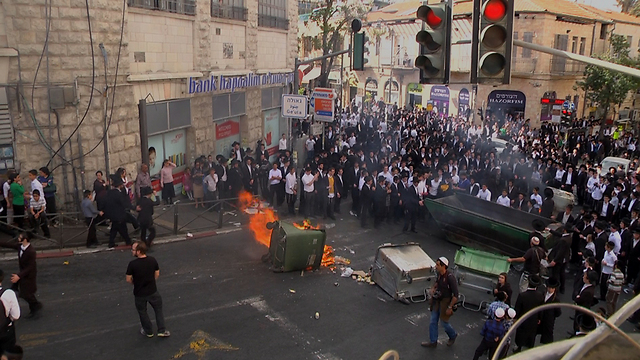 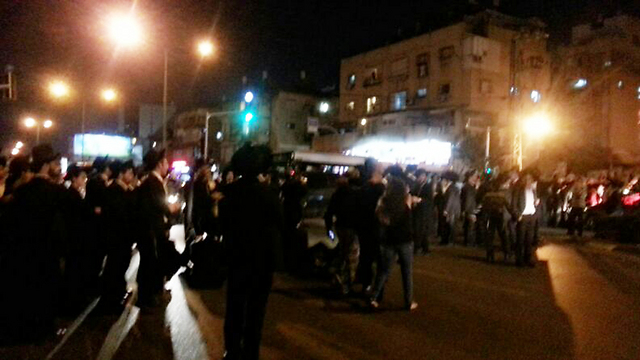 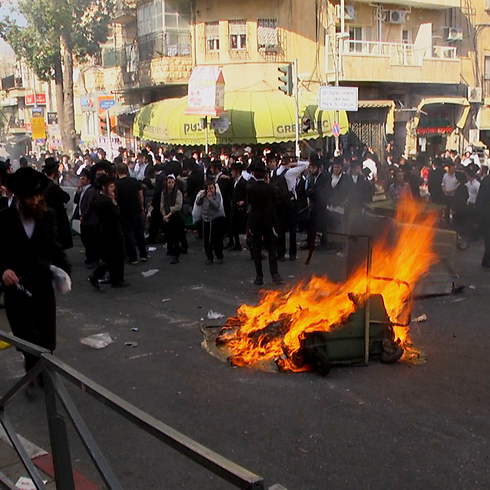 Large numbers of police, some on horseback, were deployed to the area, and began making arrests in a bid to restore order. Five demonstrators were detained.

Thursday's protest was meant as a show of support for an ultra-Orthodox man who refused to appear at a recruitment center.

Israel recently passed a contentious law aiming to gradually increase ultra-Orthodox enlistment. A system of military exemptions for ultra-Orthodox men has bred resentment among Israel's secular majority, whose sons serve three years. Ultra-Orthodox leaders say they serve Israel through religious study and prayer and fear integration into the military will pose a threat to their pious way of life.

The student was arrested after refusing to report to enlistment notice. The demonstrators demanded the student be released, refusing to accept that – under the new law – a student can be arrested for asking to learn Torah instead serve in the IDF.

The bill, which would not go fully into effect until 2017, would impose criminal sanctions on ultra-Orthodox draft dodgers. However, yeshiva students would have the right to defer service until age 26. The issue lies at the heart of a cultural war on the place of the ultra-Orthodox in Israeli society.

For years exempt from military service, the ultra-Orthodox insist their young men serve the nation through prayer and study, thus preserving Jewish learning and heritage. They say conscription threatens their community.