After seven years of construction and an investment of $150 million, the only internationally branded luxury hotel in Jerusalem, Waldorf Astoria, has officially opened for business right before the Passover holiday. Welcoming its first international guests who reserved rooms for the April opening on Thursday, the Waldorf Astoria in Jerusalem has once again returned to its historical role of serving as a landmark destination for tourists.


Formerly known as the Palace Hotel which originally opened in 1929, the current 'grand luxury' hotel has sparkling crystal chandeliers that cost over $2 million, Italian-made furniture and rugs, and hundreds of glass mezuzahs made in the Czech Republic. 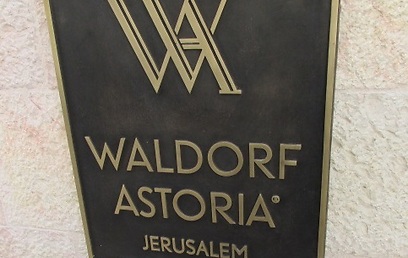 "This is Israel's biggest and longest restoration project in Israel," said Guy Klaiman, the general manager of the Waldorf Astoria Jerusalem who has had 25 years of working in the Hilton enterprise abroad.

"We had to work to keep the original 1920's façade intact as we built up the hotel," explained Klaiman in an exclusive media tour that Tazpit News Agency took part in.

"If the original façade were to have been damaged at any point during the construction of the hotel, the project would have been over," said Klaiman. "We had to be very careful not to damage the original wall."

The Palace Hotel was opened for five years in the 1930s before the building was used for government offices. Construction for the Palace Hotel began in 1928 and the grand project was initiated by the Supreme Muslim Council. The contract for building was signed between the Mufti of Jerusalem, Haj Amin al-Husseini and three contractors, an Arab contractor, Sami Awad and two Jewish contractors, Baruch Katinka and Tuvia Dunia. Hailed back then as Jerusalem's most luxurious hotel, the building was designed by Turkish architect Nahas Bey.

The 10-floor Waldorf Astoria with 226 rooms, is owned today by the Reichman family of Toronto, who is behind the project. The Reichmans formed IPC Jerusalem Ltd. to acquire development rights for the property and signed a contract six years ago with the Hilton Hotel Corporation (HHC) to manage the hotel.

Internationally-known Turkish designer who planned the Four Seasons Hotel in Istanbul, Sinan Kafadar designed the interior of the Waldorf Astoria while Israel's Feigin Architects was responsible for the outside design. The Jerusalem hotel features Greco-Roman, Gothic and Ottoman architecture as well as Oriental design inside to match the outside exterior.

“Waldorf Astoria Jerusalem’s opening is a notable moment for tourism in this ancient city that prides itself on warm hospitality,” said General Manager Guy Klaiman. "The hotel caters to the personal needs of its visitors, first via e-mail exchange and then throughout the stay of the visitor." 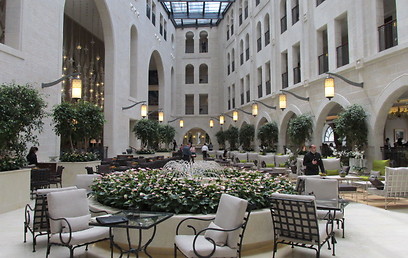 Ready for the Passover holiday, chefs from France, Russia and Italy have created a unique menu in the Waldorf Astoria's kosher kitchens. "I am very satisfied with our Passover menu as well as the delicious cuisine for the holiday," said Claud Ben Simon, the chief pastry chef who made aliyah to Israel from France and was originally a pastry chef at the Max Brenner.

(Photo: Amir Goren)
Klaiman explained the new hotel has provided 300 new jobs to Israeli locals. "We had 10,000 job applications, and out of that number we hired 300 staff members," he said. The grand hotel offers spacious and luxurious accommodations targeted towards a wealthy clientele. Rooms cost from a range of $490 to $700 per night. The most expensive accommodation is $1,400 for a night.

“Together with my multi-lingual international team of seasoned professionals, we look forward to offering guests True Waldorf Service including personal concierges while making a meaningful contribution to the country’s tourism map," concluded Klaiman.