'We like it when people get confused, this is why we do it,' says leader of political group intent on fighting far-right politics in Germany by ridiculing Nazi political culture. Now, Germany's Apple Front has followers in Hungary, where anti-Semitism is on rise.

One clear morning in 2004, an elderly man walking down the streets of the German city Leipzig came across a familiar sight which awoke unpleasant memories of the past: Dozens of demonstrators with a red arm-band with a white circle on it and a black symbol within. He witnessed Nazi demonstrations in his city in the past, but this time he decided to take a stand. He stuck out his leg as the protest's leader passed him by, tripped him and watched with a smile as he fell to the ground.

The activists’ reaction was handing the old man a flyer. The elderly man walked away, and only after a few dozen feet suddenly noticed: The symbol on the arm of the demonstrators was not a swastika, but an apple.

“We like it when people get confused, this is why we do it,” explained Max Upravitelev, one of the leaders of The German Apples Front, in an interview. Contrary to first impressions, he is not the head of an extreme right wing party, but the “minister of propaganda” of a group that pokes fun at neo-Nazis by manipulating symbols and slogans usually associated with them. The German Apples Front's provocative actions often inspire outrage, but Upravitelev insisted that “most people like us, except, of course, the Nazis themselves”. And the elderly man they came across during one of their first demonstrations? “He came back 30 minutes later, apologized and applauded the work we were doing.” The German Apples Front began its operations in 2004 in Leipzig, after the National Democratic Party (NPD) won ten seats in the state parliament of Lower Saxony. Their symbol was chosen as a “tribute” to the leader of the NPD, Holger Apfel (apple in German), and their operations were inspired extremists. 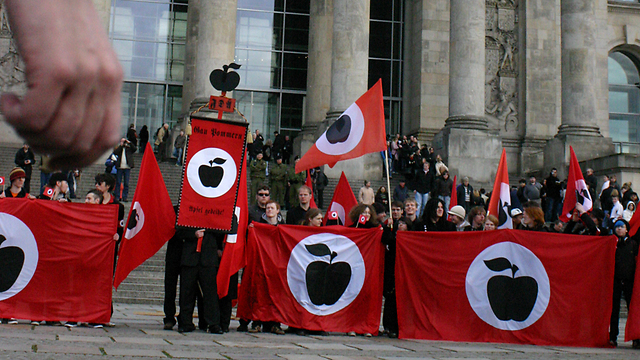 The German Apples Front (Photo: Erik Hoffman)
“They always stole symbols from the left,” argued Upravitelev, and reminded how neo-Nazis used to ware Che Guevara t-shirts at their demonstrations. “The Nazis always tried to make themselves seem like something they’re not, but we have created a concept they can’t steal”. The strategy may be familiar, but The Apple Front hoped that utilizing it in favor of the left would freshen up political protest culture. “We offer an alternative to the usual methods, simply because they are boring. Instead of just standing around at a protest and waiting for something to happen, we create a comic relief,” clarified Upravitelev. 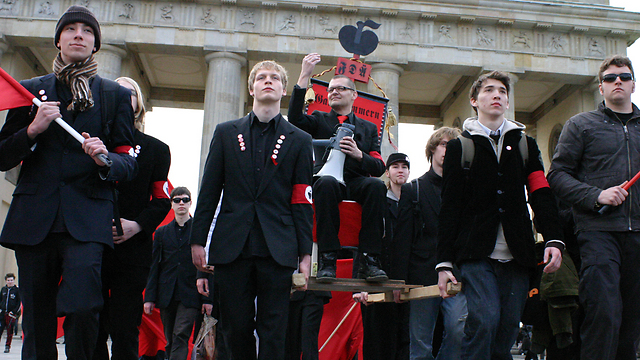 Photo: Max Upravitelev
“When we started, people used to see us and think we were Nazis, but then they would realize that nowadays neo-Nazis look differently. Now the initial shocked reaction is gone, but our tactics still work well”.

In a country where displaying Nazi symbols is an offence punishable by up to three years in jail, such a misunderstanding can also entail trouble with the law.

“The police didn’t know what to do with us for a long time,” Upravitelev confirmed. “At our first demonstration, the policemen took pictures of us and sent them to a guy who looked through a bunch of photo folders, to check if we are wearing uniforms and if we’re breaking the law. Even later, when we attended right-wing demonstrations, they didn’t know if to let us join them or to send us to where the counter-protest was staged”. Upravitelev added that “we didn’t really want to explain who we were, since that was the whole point”. The Apple Front does seem like a militant organization at first glance, and the movement’s Wikipedia page tells the story of an organized operation, complete with its own youth group and women’s movement. In reality, it functions more like a democracy. “We never bothered to change the (Wikipedia) page because it served our purpose,” Upravitelev admits. “But actually our inner circle consists of 30 people who come up with ideas and plan everything together. We have a ‘leader’, an actor who plays the Fuhrer, but we don’t really worship him. We present ourselves to the public as the true national force of Germany, but it’s all part of the act”. The Apple Front is most identified with their catch phrase “Germany for German apples” and “southern fruits get out” - a satirical jab at the extreme right’s reaction to influx immigration into Europe - but lately the movement has begun expanding its targets. 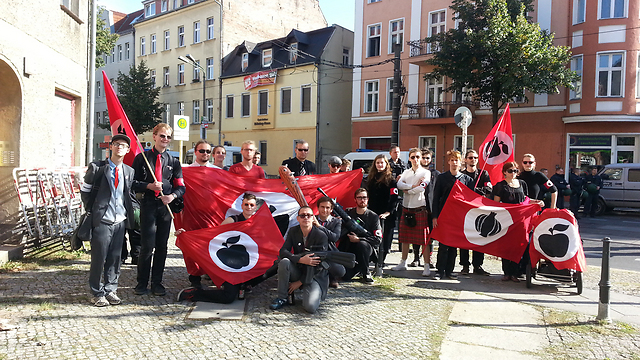 Photo: Max Upravitelev
“After years of telling the same jokes, we also grew bored,” confessed the 'propoganda minister', explaining the motive behind the organization’s latest action: Barging into a right wing convention on family values in Leipzig to protest homophobia. “The NPD had collapsed from within,” claimed Upravitelev. “The Neo-Nazis stopped holding massive demonstrations like they did a decade ago. They don’t provide us with enough material anymore. That is why we are trying to expand, and I feel that Europe’s problem is the whole right wing movement, that a few years ago persecuted Muslims, and now rallies against gay marriage. These people and their perception of how Europe needs to look like endanger us all”.

Upravitelev doesn’t cite the weakening of the extreme right as an achievement. Instead, he prides himself on the front’s influence over the occurrence in another country, Hungary, where the like-minded Garlic Front was founded in 2010.

“We chose the garlic because it’s something very Hungarian and it symbolizes strength,” explained the founder Armin Langer, 23, who until recent served as president of the propaganda and ideology department. “If something can count as a national vegetable in Hungary, except paprika, it’s definitely garlic”. Langer was at an international seminar in Austria about fascism when he encountered the Apple Front’s activity. “In Hungary ‘anti-fascism’ means that 70-year-old people go to put flowers on Soviet monuments, and the Apple Front’s activity seemed so exciting,” he recollected. So he recruited his friends - some of them political activists, artists, and journalists - and ever since they have been working the implement the Apple Front’s model in their country also. “The difference between us and our German peers is that they are mocking something that today is pretty marginal, but in Hungary it’s in the mainstream,” Langer emphasized. “You can see the shift towards the extreme right, and this is what we are fighting against”. For Upravitelev, their efforts came as a complete surprise. “We never imagined it would be possible to adapt our concept to a different country. When the Garlic Front was founded, I was ready to leave the whole thing. Now we are wondering if this might work in other countries”.

While the Apple and Garlic banner-men search for a new front, others are joining the fight inside Germany. One of those initiatives gave birth to the Storch Heinar - a stork with a military helmet, a narrow mustache, an allergy to frog meat, and a dream to become an artist, or a fashion designer to be exact.

“It’s a parody on Adolf Hitler’s life story”, explained Julian Barlen, the manager of the project, which includes selling t-shirts with the stork’s image. “We even wrote a book, a took-off of ‘Mein Kampf’, to describe Storch Heinar’s difficult childhood and how everyone ignored its art. It also tells about its single egg, referencing the rumors that Hitler only had one testicle”. 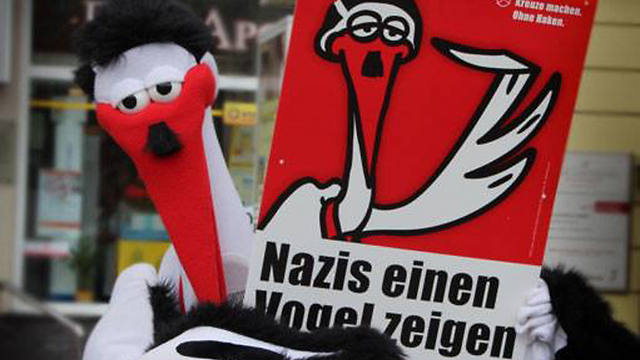 Barlen, now a member of the state parliament in Mecklenburg-Vorpommern, founded the brand with his friends as part of their protest against the opening of a store in downtown Rostock, which sold CDs by neo-Nazi bands and cloths of the brand Thor Steinar. One of Barlen’s friends pointed out how similar the brand’s name to the word “stork”, and the joke gave birth to political protest. “If the Neo-Nazis use fashion to spread their ideas, so can we,” he explained. Thor Steinar, on their part, were not amused: in 2008 they accused the humorous brand of violating copyrights, ironically taking them to court in Nuremberg - “I guess they overlooked the irony,” noted Barlen - but the Storch Heinar prevailed. Since then the project has expanded to additional fields: Besides selling t-shirts, mugs, and bags on their website, the people behind Storch Heinar now also organize school events and mass rallies attended by the stork figure, in order to raise awareness to extremism. “We formed a band called Storchkraft (stork power, in German) as a spoof of a famous neo-Nazi band, Störkraft, with which we perform in schools for at-risk youths,” added Barlen. “Our target audience is people who might be vulnerable to the neo-Nazi ideology but haven’t adopted it yet. We want to make them think and look for more information about what it really means,” he continued. 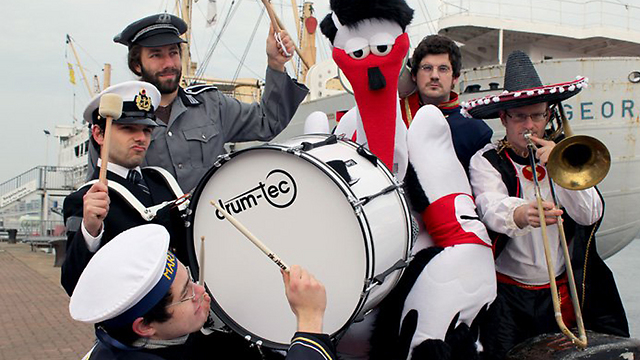 According to Barlen, the use of parody and humor succeeds in grabbing the attention of people who are otherwise indifferent to politics, but he also admitted he’s no stranger to the troubles faced by The Apple Front: "We have over 70 thousand likes on Facebook and every time we publish something, at least a thousand don’t get the joke and complain. For the Apples it must be even worse”. Like the Apple Front, the people of Storch Heinar introduced the stork as a political candidate and a “neo-Nazi alternative” at the state election in Mecklenburg-Vorpommern two years ago and yet again this year. In the coming election, the stork is planned to run for office in three other states. Nevertheless, Barlen pointed out the difference between storks and the Apples: “Their activity is terrific in my view, but some people, especially the elderly, told me they were really frightened when they saw them all dressed in black and carrying red flags. One really needs to look closely to understand they’re not Nazis. I guess we take a softer approach”. Upravitelev confirmed that in the beginning the movement was attacked by people who claimed their activity is too aggressive, but he rebuffed the criticism himself: “Satire need to disrupt the order, to daze and confuse people. We laugh occasionally at the ideology that led to the Nazi’s actions, but we would never disrespect the victims.” Langer concurred: “I’m a Jew and almost half of the members of The Garlic Front are Jewish, and many times people thanked us because at least we bother enough to take action against the Nazis. Even if at first it’s annoying to see those symbols, after a few moments it’s clear to all that we aren’t real Nazis. Nobody ever felt that we belittle the memory of the Holocaust”