Go for the food: Homemade food in Jerusalem market

Dozens of eateries at Mahane Yehuda market present the widest assortment of culinary options in the city. If you're looking for traditional Middle Eastern food, the best of the bunch may be family-run restaurant Azura.

Jerusalem's bustling open-air Mahane Yehuda market offers a dizzying assault on the senses. Vendors compete with screams over the prices of their produce as the smell of spices and fresh fish wafts through the air.

From old-school vegetable stalls, bakeries and boutique wine and cheese bars to fish and chip or falafel stands and sit-down restaurants of every style and price range, the now gentrified market's dozens of eateries present the widest assortment of culinary options in the city.

If you are looking for traditional Middle Eastern food, though, the best of the bunch may be Azura – a family-run institution in the Iraqi market famous for its Turkish-inspired delicacies that are slow-cooked to perfection atop kerosene burners.

Now spread across an entire cobblestone courtyard, the eatery offers a taste of old Jerusalem with an array of soups, salads and specialty dishes. But when it comes to Middle Eastern food, one dish will always reign supreme – hummus. Azura's version is creamy, soaked in oil and sprinkled with parsley and warm chickpeas that melt in your mouth.

Of course, there is much more to Azura than hummus. Most of the food is simple, but rich in cultural history that reflects the various ethnic backgrounds that make up modern Jerusalem, including Iraqi, Turkish and Tunisian influences. 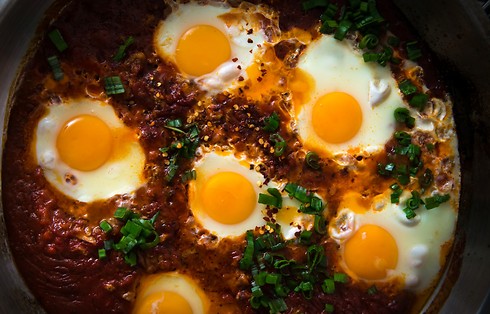 You'll find your local staples here of shakshuka (eggs poached in a sauce of tomatoes, chili peppers and onions), kubbe soup (with a small pocket of dough stuffed with ground beef and pine nuts), magadra (a hearty mix of rice and lentils, with a sprinkling of browned onions) and thinly-sliced (Israeli) vegetable salad topped with tahini. Those in a more adventurous mood can try the lungs, oxtail or "foot" soup -- as in chicken foot, which would be chicken leg in the US.

Your waiter will probably recommend some of the specials. Kima – a dish of lamb kebab with layers of eggplant, potato and spinach leaves dipped in gravy – is excellent. Azura – a Turkish eggplant filled with chopped beef, pine nuts and a special cinnamon spice blend – that bears the restaurant's name also is a big hit.

The secret to all the dishes is the hours they spend simmering on the stovetop, says manager Shabtai Shrefler.

His father Ezra, whose nickname was "Azura," opened the restaurant in 1952 after emigrating from Turkey. Today, he still makes the occasional appearance, but the food is primarily prepared in the canteen-like kitchen by his nine children.

It's more expensive than your average working-class Israeli diner (a lunch for two, including appetizers, will cost you about $40), but far more reasonable than the gourmet restaurants serving traditional food that have sprouted up in the market in recent years. And it has maintained its old-time feel with simple tables spread across the courtyard within view of the market's trademark overflowing fruit and vegetable stands.

The old men of the neighborhood sit alongside the tables playing backgammon and sipping tea. The old ladies still hang their laundry from the balconies above.

You may need some help finding Azura, but once you head west of the market's main drag, the local merchants should be able to point you though narrow alleyways in the right direction. It's well worth the journey.