130 arrested after bloody clashes in Odessa

SLAVIANSK - Police in easter Ukraine reported Saturday that 130 people had been detained on charges of participating in riots and premeditated murder after heavy fighting between the acting Ukrainian government in Kiev and pro-Russian militants.

Regional police chief Petro Lutsiuk reported the arrests after dozens of people were killed in a fire and others were shot dead in Friday's clashes in Odessa on Ukraine's Black Sea coast on Friday.


In the country's east, pro-Russian separatists brought down two Ukrainian military helicopters involved in an operation to try to dislodge the militants from their strongholds in the town of Slaviansk.

Eastern Ukraine has been a focus of concern in Western capitals since Moscow annexed mainly Russian Crimea from Ukraine in March. Clashes have also broken out in largely Russian-speaking Odessa, not far from Crimea, but they had never involved deaths before.

Police said three people were shot dead and in 15 others were wounded in running battles between people backing Kiev and pro-Russian activists in the town. Another man died and 38 people died when a trade union building was set on fire as the fighting continued into the evening.

In the east, separatists said Ukrainian forces killed three of their fighters and two civilians when they moved in on Slaviansk in the early hours in what Moscow called a "criminal" assault. Kiev said two helicopter crew had died and seven servicemen had been wounded in the operation, which it admitted had not achieved much.

Interior Minister Arsen Avakov expressed the government's resolve to deal with the situation saying that operations were continuing into Saturday and that Ukrainian forces had taken a television tower in the town Kramatorsk, south of Slaviansk.

"We are not stopping," he wrote on his Facebook page.

President Vladimir Putin's spokesman said Ukrainian forces had fired on civilians from the air in Slaviansk in a "punitive operation" that destroyed an international peace plan. Moscow has tens of thousands of troops massed on the border and claims the right to invade if needed to protect Russian speakers. The Western-backed government in Kiev said the use of missiles to bring down its helicopters showed Russian forces were in the town. Moscow denies its troops are on the ground. 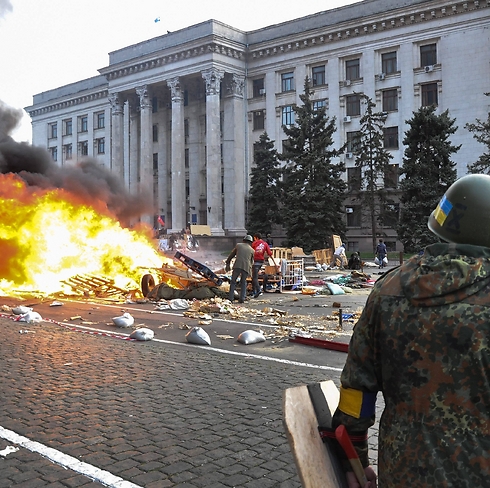 Police reported 38 dead in fires during clashes in Odessa on Friday. (Photo: EPA)
Kiev said Moscow was backing groups in eastern Ukraine who were "putting civilians in danger, seizing hostages and creating an atmosphere of terror and violence". Reuters journalists in Slaviansk, the most heavily fortified bastion of pro-Russian separatists in eastern Ukraine, heard shooting and saw one helicopter opening fire before dawn. Later in the day, the city was largely quiet, with shops shut and armed separatists in control of the streets. Advancing Ukrainian forces in armoured vehicles took up positions in the suburbs, but rebels still controlled most of the town of 130,000. Acting President Oleksander Turchinov said the operation had been complicated by the rebels' use of human shields and had not progressed as quickly as had been hoped.

The growing chaos is overshadowing a presidential election the pro-Western leadership in Kiev is planning for May 25. The rebels are planning a vote on May 11 to seek a mandate to break with Kiev, like one held in Crimea before Moscow took it over. Moscow moved in on Crimea following the overthrow of Ukraine's pro-Moscow president by protesters angered by his decision to scrap a trade deal with Europe. The United States and Europe have imposed sanctions on individuals over the Ukraine crisis but they have had limited impact. US President Barack Obama said the next step would be sanctions on sectors of the Russian economy and they would be imposed if Moscow impeded the Ukrainian presidential poll. German Chancellor Angela Merkel, visiting Washington, told a joint news conference with Obama that the elections on May 25 were critical and sectoral sanctions were ready. The energy and banking sectors are likely targets. On the square outside city hall in Slaviansk, about 100 people gathered on Friday and said they were appealing to Putin to send troops to help them. Businesswoman Tamara Voshchanaya said: "What can you think when the sound of cannon makes you jump out of bed, when helicopters are flying over and shooting at our guys?" On the town's southern outskirts, eight Ukrainian armoured personnel carriers cut off the road but faced a cordon of local residents shouting at them to go home. Some rebels erected barricades of trees. Putin's popularity has soared with the seizure of Crimea and talk of restoring Moscow's former empire. This week he restored the Soviet-era tradition of holding a May Day parade on Red Square, where marchers carried banners hailing the acquisition of Ukrainian territory. US Defense Secretary Chuck Hagel said Russia's actions in Ukraine had shattered the myth of European security in the post-Cold War era and said NATO allies had increased the danger by failing to meet their defence spending pledges. The European Union said it was watching events in eastern Ukraine with growing concern. But Kiev is not a member of NATO and Western leaders have made clear they will not fight to defend Ukraine.

The Ukrainian Defense Ministry said two Mi-24 attack helicopters had been shot down by shoulder-launched missiles while on patrol overnight around Slaviansk. Two airmen were killed and others wounded. Other Ukrainian officials and the separatist leader in Slaviansk said earlier that one airman was taken prisoner. A third helicopter, an Mi-8 transport aircraft, was also hit and a serviceman wounded, the Defense Ministry said. The SBU security service said this helicopter was carrying medics. Ukrainian officials said their troops overran rebel checkpoints and Slaviansk was now "tightly encircled". Putin's spokesman heaped blame on the Ukrainian government, which took power two months ago after pro-Western protests forced president Viktor Yanukovich to flee to Russia. Noting that Putin had warned before that any "punitive operation" would be a "criminal act", Dmitry Peskov told Russian news agencies that this had now happened in Slaviansk. "While Russia is making efforts to de-escalate and settle the conflict, the Kiev regime has turned to firing on civilian towns with military aircraft and has begun a punitive operation, effectively destroying the last hope of survival for the Geneva accord," he said, referring to a deal on April 17 signed by Russia, Ukraine, the United States and the European Union. Under that agreement, separatists were supposed to lay down their arms and vacate the public buildings they have seized in about a dozen towns they have seized across the Russian-speaking east. Since then, however, they have tightened their grip. Ukraine's Interior Ministry said it persuaded separatists to leave two buildings in the city of Luhansk on Friday. The SBU said the deadly use by the separatists of shoulder-launched anti-aircraft missiles was evidence that "trained, highly qualified foreign military specialists" were operating in the area "and not local civilians, as the Russian government says, armed only with guns taken from hunting stores".