Labor and Likud members join bid to push controversial legislation to open up Temple Mount compound for Jewish prayer, currently permitted for only for Muslims.

Labor and Likud MKs have joined forces on a new bill that proposes to allow Jews to pray at the Temple Mount compound - for the first time since the destruction of the Second Temple, as Jews are currently barred from praying at the site.

MK Miri Regev (Likud) and MK Hilik Bar (Labor) are expected to introduce the bill for discussion in the Knesset. It aims to extend freedom of worship on the Temple Mount to the level allowed in Hebron's Cave of the Patriarchs, where Jews and Muslims share the holy site.

Last April, dozens of Arab youths, some masked, rioted on the Temple Mount, throwing stones and fire crackers at security forces deployed to the scene. The clashes led to the compound being closed to visitors and the arrests of dozens suspected of violent acts. Such scenes constantly reoccur in the compound. 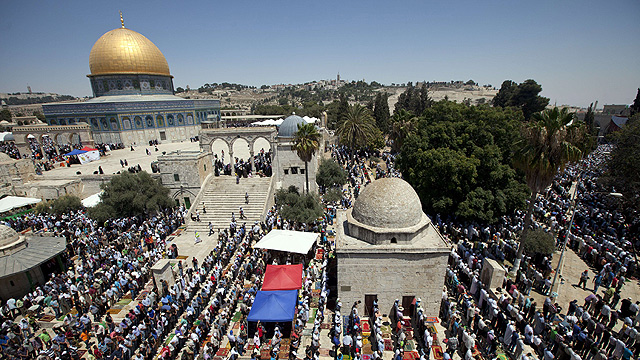 Given that any development related to the flashpoint location could result in wide-spread Palestinian unrest, Prime Minister Benjamin Netanyahu will likely try to torpedo the proposal.

If that were to happen, Regev, who heads an Knesset's Internal Affairs committee, will turn to the High Court of Justice for resolution of the sensitive issue.

Initially, Deputy Minister of Religious Affairs Rabbi Eli Ben-Dahan attempted to change worshipping rights on the Mount through regulations, but delay in their implementation led Regev to seek a quicker resolution.

"There is no reason that Jews should not be allowed to pray in the holiest site in the world," she said on Saturday.

Regev said she would not desist until that was achieved. "I firmly believe that each event of Muslim unrest on the Mount should lead to its closure to Arabs. The prime minister is not the only decider on the issue, and if the proposal does not pass I'll turn to the High Court for Justice in a public petition until Jews are allowed to pray with tallit and tefillin on the Temple Mount."

The Likud MK emphasized that the bill's aim was not unrealistic: "When we enforced Israeli law on the Golan Heights they said it would cause riots. But just like the sky doesn't come tumbling down when Jews pray in the Cave of the Patriarchs, they sky will not fall now."

The bill's Labor supporter, Bar, said Saturday he was proud to introduce the legislation specifically as a representative of the left: "I believe full equality on the Temple Mount will lead to Jews and Arabs living side by side. I insisted the Waqf's authority would not be harmed, but the Muslims need to understand that we also have a right to pray there."

Bar stressed that supporting the bill was an extension of his nationalism. "As a Zionist and a nationalist, I see in these holy sites the cradle of our existence, and if someone on the left has complaints against Jewish prayer on the Temple Mount – they will have a hard time claiming that other ethnicities suffer discrimination."

In an attempt to reduce tensions on the Mount, the bill stipulates that "no demonstration of protest or incitement that disturbs the peace will be tolerated" and that if a person or authority prevents a worshipper from exercising his right they will face a fine of up to NIS 50,000.

About tens of thousands of Jews make the ascent to the Temple Mount compound a year, but they are barred from praying.