Francis tells pilgrims in Rome main reason for Holy Land visit is to 'pray for peace in that land, which has suffered so much.'

Pope Francis arrived in Jordan Saturday at the start of a Middle East tour aiming to boost ties with Muslims and Jews as well as easing an age-old rift within Christianity itself.

The Vatican has billed Francis' first visit to a region roiled by religious and political differences as a "pilgrimage of prayer," saying the pope will shun bulletproof vehicles in favor of open-top cars despite security concerns.

Israeli authorities have moved to lessen the possibility of trouble by issuing restraining orders against 15 right-wing Jewish activists this week, ordering them to stay away from sites being visited by the pope, after a string of hate attacks on Christian sites.

"It will be a purely religious trip," the pope told some 50,000 pilgrims at his last general audience in St Peter's Square before his three-day visit that takes him to Jordan, Israel and the Palestinian territories.

Francis said the main reasons for the trip were to meet with the Orthodox Patriarch of Constantinople, Bartholomew I - a key Orthodox leader - and "to pray for peace in that land, which has suffered so much". 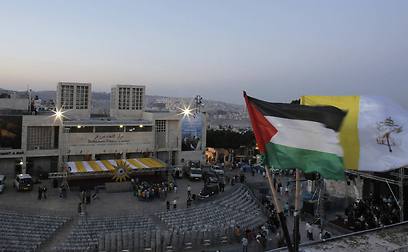 Preparations to the pope's visit at Manger Square in Bethlehem (Photo: Reuters)

That ceremony in which he will take part in a special joint prayer with Bartholomew on Sunday in the Church of the Holy Sepulchre - venerated as the place of Jesus' crucifixion and resurrection - is seen by the Vatican as the highlight of the visit.

The meeting is fitting, given that Francis has made ecumenism, the ideal of unity of the Christian Churches, one of the priorities of his papacy.

He will also meet with Muslim and Jewish leaders in Jerusalem.

"I don't think the visit is going to bring the signing of a peace deal tomorrow, or even the organization of a conference, but I am sure that it will make a substantial contribution because the pope respects all cultures and all religions," he added.

The 77-year-old Argentine pope has already set the tone for a trip rich in symbolism by inviting two old friends from Buenos Aires to join him, Jewish Rabbi Abraham Skorka and Muslim professor Omar Abboud.

In Jordan, Francis will meet King Abdullah II, hold mass in a stadium in Amman and, on the banks of the River Jordan, hear first hand of the suffering of Syrian refugees, offering an opportunity for the pontiff to reiterate his calls for an end to the three-year war.

He is also expected to touch on a key concern of the Vatican, the forced migration of Christians from the Middle East.

"Because of the global popularity that Francis enjoys, if he comes to the Holy Land and says 'I have your back' it may mean something to Christians. The world is paying attention when Francis speaks, unlike Benedict. It may have a greater resonance," John Allen, Vatican expert for the Boston Globe, told AFP.

Although only 250,000 Jordanians identify themselves as Christian - in a Muslim country of seven million - Prime Minister Abdullah Nsur said the visit would show the kingdom as an oasis of peace in a turbulent region of "blood, wars and repression". 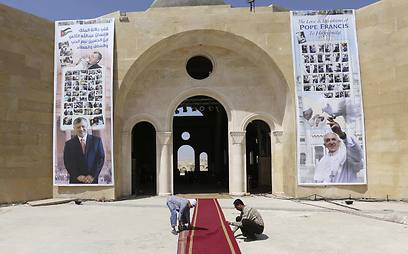 Preparations to the pope's visit at the Latin Church in Shouneh, Jordan (Photo: Reuters)

Francis will pray on the banks of the River Jordan for the victims of the Syrian conflict and meet some the families among the 600,000 refugees who have sought shelter in Jordan.

Early Sunday, the pope will make the short helicopter ride to Bethlehem where he will meet Palestinian Authority President Mahmoud Abbas before chatting to children from a Palestinian refugee camp and lunching with refugee families.

He will then fly to Tel Aviv where he will be greeted by President Peres before heading to Jerusalem.

On Monday, the pope will visit the Al-Aqsa Mosque compound and meet the Grand Mufti of Jerusalem Mohammed Hussein, visit Israel's national cemetery on Mount Herzl and go on to the Yad Vashem Holocaust memorial.

He is then set to meet Prime Minister Benjamin Netanyahu and celebrate mass in the Cenacle, the place where Christians believe Jesus held the Last Supper. 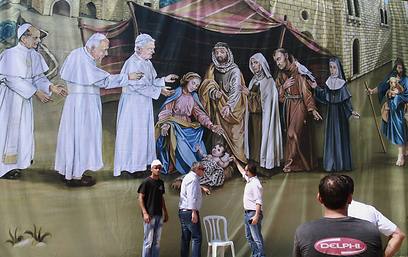 Skorka said the pontiff would try to avoid political pitfalls in the sensitive region by dividing his visits equally between Jewish Israeli sites and Muslim or Christian landmarks in Palestinian territory.

"He will try to be balanced," Skorka told journalists in Jerusalem.

The Cenacle stop has inflamed the ultra-Orthodox and nationalists since Jews revere part of the building as the tomb of King David and it is at the center of long-running negotiations with the Israeli government over prayer rights, with the Vatican hoping it will be given a right to use the site.

Israel has said there is "no intention to transfer to Vatican sovereignty or ownership the Tomb of David or the Cenacle."