Francis kissed the hands of a half-dozen Holocaust survivors as he heard their stories and of loved ones killed by the Nazis.

After laying a wreath at the tomb of the founder of modern Zionism, Theodor Herzl, and visiting Israel's Memorial to Terror Victims on Monday, Pope Francis honored the memories of the six million Jews murdered during the Holocaust at the Yad Vashem museum in Jerusalem.

Accompanied by Prime Minister Benjamin Netanyahu and President Shimon Peres, Francis prayed before a crypt with ashes of victims and laid a wreath of yellow and white flowers in the "Hall of Remembrance." 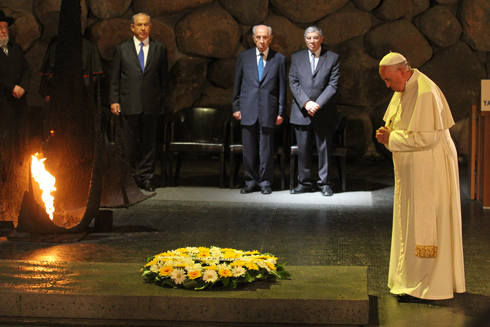 And then the pope made the type of gesture of humility that has become his custom since being elected pontiff in 2013.

One by one, he kissed the hands of a half-dozen Holocaust survivors as he heard their stories and of loved ones killed by the Nazis during World War II.

"Never again, Lord, never again!" Francis said. "Here we are, Lord, shamed by what man - created in your own image and likeness, was capable of doing."

Reading a haunting personal reflection that was a cross between a poem and a prayer, he called the Holocaust "a boundless tragedy", adding: "A great evil has befallen us, such as never happened under the heavens. Now, Lord, hear our prayer, hear our plea, save us in your mercy. Save us from this horror."

Joseph Gottdenker, born in Poland in 1942, said he briefly told the pope how he was saved as a boy by Catholics who hid him during the Holocaust. Gottdenker, who now lives in Canada, said he was more emotional than he expected to be when he met the pope.

"The Catholic people who saved me and risked the lives of their whole families to save me, they are looking down today and proud to see me meet the leader of their faith," Gottdenker said after the ceremony.

Speaking minutes after landing in Israel on Sunday, Francis called the Holocaust "an enduring symbol of the depths to which human evil can sink", adding: "I beg God that there will never be another such crime."