Ya'alon: Israel will hunt down terrorists who attack its citizens

Defense Minister Moshe Ya'alon vowed Thursday that Israel would not sit idly by as Palestinian terrorists from Gaza attacked communities in the south with rocket fire.

Ya'alon was speaking the day after an Israel Air Force strike killed a terrorist in northern Gaza late Wednesday, and reportedly wounded three others. The strike came hours after a rocket was launched from Gaza at southern Israel. 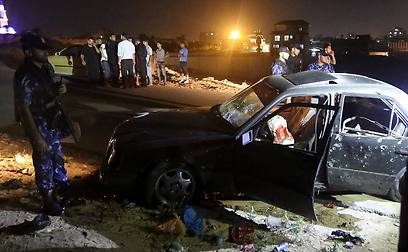 "Last night the IDF and ISA launched a targeted strike against a terrorist in the Gaza Strip, who participated in the launching of rockets into Israel and planned additional rocket and terrorist attacks," Ya'alon said Thursday.

"We will not ignore the fire or the attempted attacks whose purpose is to disrupt the lives of our citizens living in the South and harm our forces. We will pursue and lay our hands on whoever threatens us. We will know how to act whenever and wherever necessary to thwart any attempts by terrorist forces in Gaza to strike Israeli citizens, as we did last night."

Witnesses said the airstrike targeted a man on a motorcycle and also struck a nearby car. Palestinian medical officials said two of the wounded were in critical condition. They did not immediately identify the casualties.

The IDF identified the target as a 33-year-old militant linked to global jihad. It said the man had participated in many rocket attacks while also working as a Hamas policeman, and described the airstrike as pre-emptive.

"Our policy is clear. Kill those who rise up to kill us," Prime Minister Benjamin Netanyahu said in a statement.

He said he wanted to "remind" the international community that Abbas had pledged the new government would uphold previous agreements with Israel. "This means that he is responsible for dismantling Hamas and other terror groups" in Gaza, he said.

The United States condemned Wednesday's rocket attack on Israel, but stressed that at present Hamas is responsible for maintaining calm in the coastal Strip and suggested it wasn't ready to hold the new Palestinian unity government responsible for the attack.

"We expect the Palestinian Authority will do everything in its power to prevent attacks from Gaza into Israel, but we acknowledge the reality that Hamas currently controls Gaza," State Department spokeswoman Jen Psaki said.

Palestinian militants fired a rocket into southern Israel on Wednesday, the first such attack since President Mahmoud Abbas formed a new government last week, and took charge, at least formally, of Gaza. Israel has warned it would hold the Western-backed Abbas responsible for any attacks out of the territory, even though the militant Hamas maintains de facto control. Abbas' office condemned the rocket fire and urged Gaza militants to abide by previous cease-fire deals. Israel dismissed the condemnation as "empty rhetoric", while the US welcomed it.

The threat of violence is one of the many challenges Abbas is dealing with as he tries to unite two territories after a seven-year rift. Hamas seized control of Gaza from Abbas' forces in a violent June 2007 move.

Under last week's deal, Abbas' new 17-member cabinet is to administer both Gaza and parts of the West Bank. Hamas has no formal role in the technocrat government, but it backs the unity government and remains the de facto power in Gaza with thousands of armed fighters.

The US and European Union have so far been willing to give Abbas, a strong proponent of nonviolence, a chance.

Militants in Gaza, including members of Hamas, have fired thousands of rockets at Israel over the years, though Hamas mostly observed an informal truce in recent years. The West considers Hamas a terror group due to scores of deadly attacks on Israel, though Abbas has said the new cabinet will follow his pragmatic program.