Families of abducted teens: 'We love you – stay strong'

PM Netanyahu tells families Israel is 'doing everything' to find teenagers, while families ask to send strength to everyone involved in the effort to return their children: 'We feel a tremendous hug of love. We request that everyone continue praying'.

The families of the the three Israeli teenagers presumed to be kidnapped in the West Bank met Tuesday morning for the first time since the youths disappeared late Thursday night and described the event as a "meeting of solidarity and self- strengthening."

Speaking at the Frenkel family home in the settlement of Nof Ayalon, the families expressed their wish at a press conference to "send strength to everyone that's involved in this effort – to the soldiers, to the government, to the prime minister that's in touch with us. We're full of thanks for everyone involved"

Prime Minister Benjamin Netanyahu met with the families, and promised them Israel was doing everything it could to bring their sons back to safety. "In the name of the Israeli public I wish to strengthen your spirit," Nentayhau said.

"We are doing everything to find Eyal, Gil-Ad and Naftali," Netanyahu told the three families. "We are working in the field, putting in a massive operational and intelligence effort.

Families of kidnapped teens: "We love you, and we miss you"    (צילום: עידו בקר)
X

Families of kidnapped teens: "We love you, and we miss you" 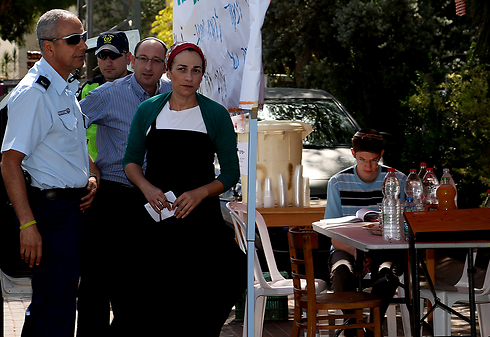 The families are familiar with one another due to their sons' friendship and mutual studies at the Makor Haim yeshiva (in which Naftali Frenkel and Gil-Ad Shaer studied), and have been in telephone contact over the past days. "We feel a tremendous hug of love and support from all over," said Rachel Frenkel, the mother of Naftali Frenkel."

"We request that everyone continue praying and continue all the good deeds, just pass it on. We just want to hug the children. Eyal, Gil-Ad, Naftali – we love you, and we miss you. Stay strong," Frenkel added.

Citizens wishing to express solidarity with the family members poured into the Frenkel family home throughout the morning. One resident of southern Israel said that he had in the past arrived at the yeshiva in which the boys studied, seeking for help due to his poor economic condition,and described how Frenkel came to his support.

"When he heard my story, he simply took out a NIS 100 note and gave it to me. When I saw his picture in the media I was shocked, I couldn't believe that he was the one who was kidnapped. I came to tell this story to his parents, so that they know what a good son they have," he explained. Many other citizens who did not enter the home passed on supportive notes and gifts to the families.

Speaking to citizens who gathered outside his home, Shaar's father said Monday: "They tell us that we are strong, but I have to tell you that our strength comes from you. We feel the connection between all the populations and the public.

"We had here representatives from all across the political spectrum and we are all united. We receive telephone calls from people all over Israel and get support from the entire would that is praying for our children."

The families received widespread support throughout Israel and the world. Speaking before the family at the press conference, singer Tony Orlando who was visiting Israel for what he described as a pilgrimage, expressed his support.

Referencing one of his biggest hits "Tie a Yellow Ribbon Round the Ole Oak Tree", Orlando stated that he intends to urge Americans to demonstrate their own support by tying three yellow ribbons for each of the missing teens.

"I plead in the name of God to the person who held these boys, to please return them to their families…children should be off the list….to the captors, please, bring the children home," Orlando added.