Parents pray for the return of their boys
Photo: Barel Efraim

Mother of kidnapped boy: I believe they'll return, but if not, remain strong

Families meet with President Peres who promises to speak with Obama, congressional leaders about fighting terror funding nations, says "terror is a global problem, not just an Israeli one."

The families of Eyal Yifrach, Gilad Shaer and Naftali Frankel, who were kidnapped in the West Bank a week ago, held a prayer vigil at the Kotel and then met with President Peres who reiterated that "security forces will do everything to bring the boys home."

"I wholeheartedly believe the boys will return, but if not, remain strong," Rachel Frenkel, mother of Naftali Frenkel said Thursday to a group of well-wishers who congregated with the family at the Kotel for a prayer service for the missing boys.

"God does not work for us," she said when asked about the prayer service, "but I do believe they will return."

She further told the large crowd of supportive youths that "don't break down if something else happens, OK? Stay together, stay strong. I believe they will return quickly." 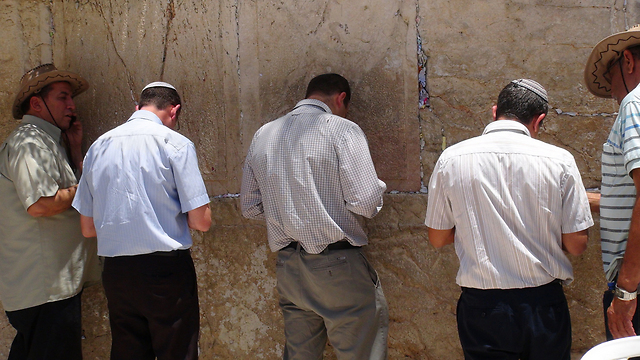 Parents pray for return of their boys (Photo: Barel Efraim)
Peres embraced the families and heard from them about their sons and experiences over the past days.

"I asked to meet you because this is a national event, the whole nation is united and standing by your side and praying with you for the safe return of your boys.

"The security forces are working day and night in every street and alley of Hebron and leaving no stone unturned in the effort to find your boys," Peres said.

The IDF has conducted an unprecedented manhunt operation – dubbed Operation Brother's Keeper – in the West Bank since the three went missing. Thursday saw tensions in violence grow, as Palestinians in the Jenin area threw rock and fire bombs at forces. An estimated 30 Palestinians were arrested by security forces Thursday, bringing the total to 280 since the kidnapping. Peres vowed to bring up the issue in his visit to the US next week, during which time he is expected to meet with US President Barack Obama and congressional leaders, and promised to "raise the cry of the people of Israel against terrorism… We must continue to pressure the terrorists to remove their sources of funding. Just as there were sanctions against Iran we must raise the sanctions against any source of terror. They must be brought to justice. President Peres addressed world's reaction to the event and said, "The leaders of the world must make their voices heard loud and clear, they must take a strong stance against terror. Terror is a global problem, not just an Israeli one – we must recruit the world."

Ofir Shaer, the father of Gilad, thanked the president for his involvement, and said "Your invitation is another example of the genuine support we have felt over the past days from all directions, with no distinction between religion, politics or sector.

"Your words strengthen us as we stand strong and united in this difficult time that our families find themselves in. "The people of Israel are with us. The Jews of the world are with us. We expect the whole world to act to free our boys. We ask of you all to do more and to your positive thoughts, to increase your prayers alongside the actions of the security services who are working night and day to bring back Naftali, Eyal and Gilad home safely as soon as possible."