The UN cultural agency has designated a network of ancient, man-made caves outside of Jerusalem a World Heritage site earlier this week.

The 2,000-year-old caves are comprised of chambers and networks with various functions, and are situated below the ancient twin towns of Maresha and Beit Guvrin.

The caves, known for their unique 'bell caves', represent the "land of a thousand caves" in the Judean lowlands, scattered over an area of about 100 square kilometers.

Israel now boasts a total of eight World Heritage sites; the White City of Tel-Aviv, the Biblical Tels of Megiddo, Hazor, Beersheba, the Incense Route and Desert Cities in the Negev, the Bahá’i Holy Places in Haifa and the Western Galilee, Masada the Old City of Acre and the Carmel caves.

Only countries that have signed the World Heritage convention, pledging to protect their natural and cultural heritage, can nominate a site, which must have an "outstanding universal value" to qualify.

UNESCO crowned the Beit Guvrin caves as 'a Microcosm of the Land of the Caves.'

"This 'city under a city' is characterized by a selection of man-made caves, excavated from the thick and homogenous layer of soft chalk in Lower Judea. It includes chambers and networks with varied forms and functions, situated below the ancient twin towns of Maresha and Beit Guvrin, that bear witness to a succession of historical periods of excavation and usage stretching over 2,000 years, from the Iron Age to the Crusades, as well as a great variety of subterranean construction methods," UNESCO said in a statement. 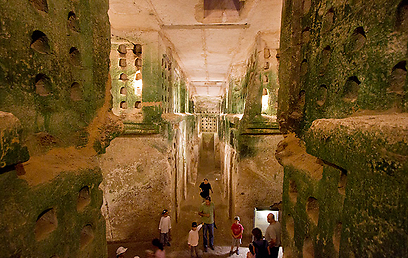 "The original excavations were quarries, but these were converted for various agricultural and local craft industry purposes, including oil presses, columbaria (dovecotes), stables, underground cisterns and channels, baths, tomb complexes and places of worship, and hiding places during troubled times.

"The ancient town of Maresha and Bet Guvrin are two main sites in a larger area of caves and hiding that existed just off the Via Maris during the Byzantine period. According to evidence produced by Prof. Yoram Zafrir, over 100,000 people lived in this area away from the main trade route. The main urban settlements in the Judean foothills were safely removed from the main Via Maris with its movements of conquering armies between Egypt and the Fertile Crescent.

"Maresha and Bet Guvrin, important ancient cities located in the basin of the Guvrin Stream, were highly populated in the Greco-Roman and Byzantine eras, and their unique natural formations were used as hiding places for the local population in conjunction with tels and neighboring towns. Maresha is mentioned among the cities of Judea noted in Joshua and as one of the cities fortified by Rehoboam against the incursion of Babylon into his kingdom: 'And Rehoboam... built cities for defense in Judah. He built even Bethlehem...and Mareshah.'"

During the Persian period, after the destruction of the First Temple, Maresha and all of southern Judea was settled by Edomites, who came from the southeast.

At the end of the 4th century BCE Sidonians and Greeks came to Maresha, bringing the Hellenistic culture with them. In addition, isolated Egyptians and a few Jews lived there - refugees from the fall of the Temple and emigrants from the Coastal Plain. Thus was created the special fabric of society in this Hellenistic city, which was an important economic center.

During the same period, the Lower City was built, and in it many caves were hewn.

From historical sources and local excavations it became evident that in 113 BCE John Hyrcanus I, the Hasmonean, conquered Maresha and converted the residents of the city and its surroundings to Judaism.

The upper and lower city became desolate ruins. However, Maresha recovered and was repopulated, but its settlement was sparse, and according to Josephus Flavius, it was finally demolished by the Parthian Army in 40 BCE.

Beit Guvrin replaced Maresha as the most important settlement in the area. It is initially mentioned by Josephus Flavius in 68 CE as one of the towns conquered by the Roman general Vespasian. Following the destruction of the Second Temple, it continued to exist as a rather crowded Jewish settlement until the Bar-Kochva Revolt, 132-135 CE. Emperor Septimus Severus changed Beit Guvrin's name to Eleutheropolis ("City of the Free") and granted it municipal status. Two aqueducts brought water from afar, and together with local waterworks, supplied the needs of the residents.

Besides swellings, the city boasted an amphitheater and public buildings. The Jewish settlement was rehabilitated, and in the 3rd-4th centuries, Beit Guvrin was mentioned in the Talmud and Midrashim - Commentaries on the Scriptures - and by its sages.

From the Roman and Byzantine periods, a large Jewish cemetery and architectural remains were discovered, as was a synagogue inscription. During the Byzantine period, Beit Guvrin was an important center of Christianity with a number of churches.

Most of the bell caves were dug during the Early Muslim period, and findings from the Crusader period indicate that it was a small fortified city, at the hub of which was a church dedicated in 1136. The city was surrounded by Crusader villages, and apparently the Church of St. Anne was restored at about the same time.

Aryeh Savir of the Tazpit news agency contributed to this report.