Firefighters in Jerusalem managed to control a massive brushfire Wednesday that threatened homes in the neighborhoods of Ein Karem and Kiryat Yovel.

Firefighters were also working to prevent the fire from reaching the Yad Vashem Holocaust Museum, where staff were being evacuated

Residents in the two areas reported that a police helicopter had been circling and calling on them to evacuate their homes. Due to the dense smoke, residents of some streets in the capital had also been evacuated. Magen David Adom rescue service said that a number of people were being treated for smoke inhalation. 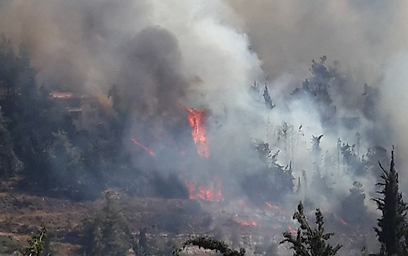 Fire in Jerusalem (Photo: Dennis Yarushchik)
Some 30 teams of firefighters, some of whom were in from home, were battling the blaze along with six firefighting planes. Strong winds meant that the fire was spreading up the valley, giving rise to fears that it might spread beyond the homes in the area. Police were going from house to house to make sure that they were empty. 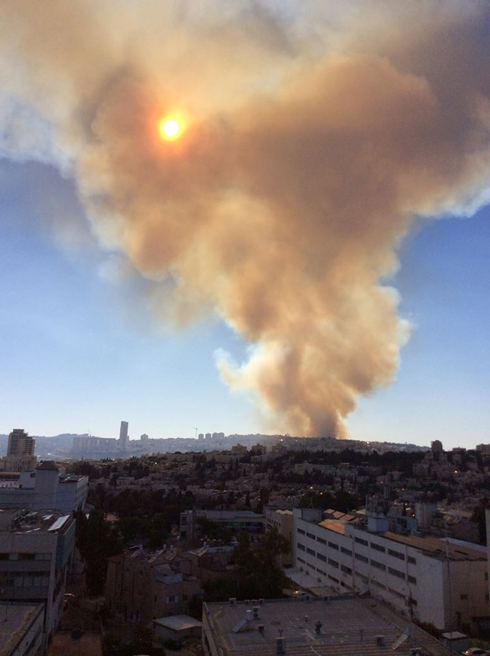 The local traffic police were asking drivers heading for the area to use Route 443 instead of other arteries. The Electric Corporation has also shut off the power to some affected streets. 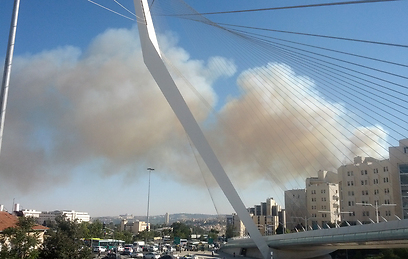 A command post was established in the area of Mount Herzl in Jerusalem, and police ordered the light rail lines to operate only between Pisgat Ze'ev and Herzl Boulevard.

Some residents of the area, among them the elderly, began to evacuate their homes at around noon.

"Police and firefighters arrived and began spraying water on the building," said Dima, a local resident. "I packed a small bag and left. The fire did not come near, but it was difficult to breathe."

In recent days, several fires have broken out in the Judean hills. Earlier Wednesday, a forest fire started near the Nataf community, north of Abu Ghosh. Five firefighting teams and two planes were dispatched to extinguish the blaze. On Tuesday, a fire raged at the Ben Shemen Forest in central Israel, and firefighting planes were also dispatched to help bring it under control.