After a relatively quiet morning, protests over the dead of Arab teen resume in Shuafat; Yasam police wounded, treated on the scene.

After a relatively quiet morning, the protests in East Jerusalem resumed on Thursday afternoon when dozens of Arab youths started sitting trash cans on fire and hurl stones at police in Shuafat.

The confrontations between protesters and security forces started on Wednesday after the body of Muhammad Hussein Abu Khdeir was found in the Jerusalem forest. Palestinian Authority President Mahmoud Abbas laid the blame for the murder of the Arab teen on Israel and protesters believe his murder came as retribution for the kidnapping and murder of three Israeli teens, whose bodies were found near Hebron earlier this week. 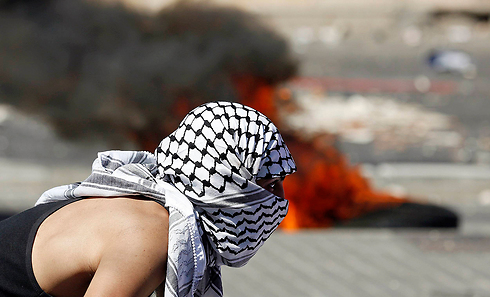 The protesters, many of them masked, also fired fireworks at the police forces. A Yasam policeman was hurt and treated on the scene. Security forces were using crowd dispersal means. 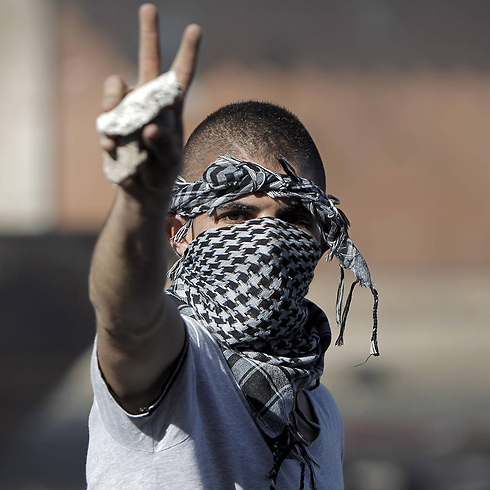 An autopsy of the Arab teen's body has been completed on Thursday in the presence of a Palestinian doctor at the Abu Kabir Forensic Institute, and the results of the autopsy has were given to police. 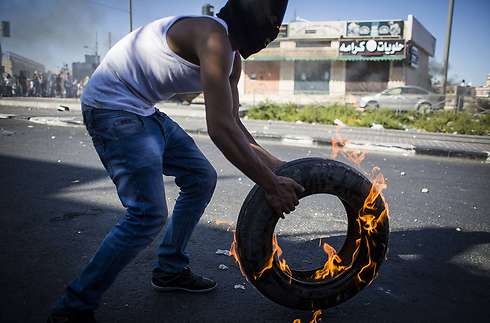 Masked Arab youth throwing a burning tire during clashes with Israel Police in East Jerusalem neighborhood of Shuafat (Photo: Gettyimages)
Defense Minister and former chief of staff Moshe Ya'alon accused Prime Minister Benjamin Netanyahu of not combating terrorism with a strong enough hand, which Ya'alon asserted was the reason Israel's deterrence has eroded. "A policy of calm for calm means we accept the situation in which boys on their way home are being kidnapped and murdered. It means we accept a situation in which live in the south are a danger and continuous nightmare, and mostly we just encourage our enemies to set the agenda for us as they please, and this is a grave mistake," he said. "Why are we, a sovereign nation with a strong army, begging a terror organization to give us calm? We need to recover the deterrence in a way that they are the ones begging for calm. What are we teaching our enemies all over the world? That they can do anything to us and we'll turn the other cheek," he continued.