One of the tweets

A BBC report has found that many of the photographs used to illustrate the situation in Gaza are from years ago, and even from the conflicts in Iraq and Syria.

A significant part of any battle nowadays is waged in the media, as each sides tries to garner public support through the exploit of images and footage used to influence popular opinion.

A report by the BBC shows that Palestinian supporters are using fake images to illustrate the suffering in Gaza.

"Graphic images are being shared on social media to show how people have been affected by the renewed tensions between Israel and the Palestinians," the BBC reported.

"Over the past week the hashtag #GazaUnderAttack has been used hundreds of thousands of times, often to distribute pictures claiming to show the effects of Israeli airstrikes on Gaza."

The hashtag has received 375,000 retweets in eight days.

The network found that several graphic photos, that spread through social media proporting to show killed Gazans and destruction caused by IAF strikes in recent days, were actually photos taken several years ago, some of which in other war areas like Syria and Iraq.

"BBC Trending," a show that examines trends in social media, checked the veracity of widely spread photos on Twitter, Facebook and Instagram with the hashtag #GazaUnderAttack.

Over 300,000 posts were made under that hashtag. In one case, a picture of a neighborhood being bombarded was posted with the caption "This happened today in gaza while ramadhan.Our prayers always be w you. Israel is the real terrorist! (sic)"

But a BBC investigation found that the photo was taken during an IAF strike in 2009 in Beit Lahia during Operation Cast Lead. 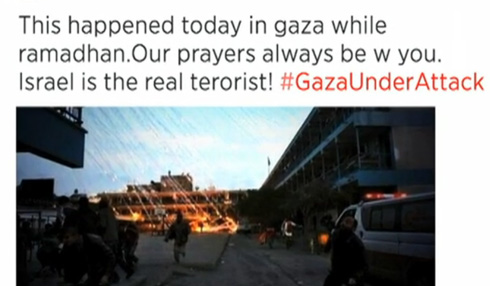 In another instance, a photo of blooding children was posted with the caption "This is not a matter of religion. This is a matter of humanity." 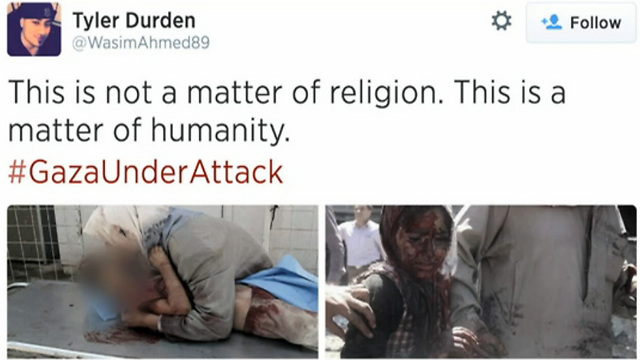 According to the BBC, the photo was taken in Aleppo in Syria and not in Gaza. Another photo in the same post was taken in Iraq in 2007.

The British broadcaster also spoke to one of the posters who shared a photo under the #GazaUnderAttack, even though the photo was taken in Syria. "I deleted one of my posts that has the image in there," she said. "It's disappointing that images get shared quite quickly. I guess that's the different between the internet and credible newspaper publisher where pictures are from a source."

A Ynet examination found that photos that are not from the IDF's current Gaza operation are still being shared on Twitter.

A search of the hashtag found a photo of two men rescuring a boy severely wounded in IAF bombings with the caption "The world is silent as Israel wipes out Gaza with airstrikes. Another kid, one of many, says goodbye." with the #GazaUnderAttack hashtag. 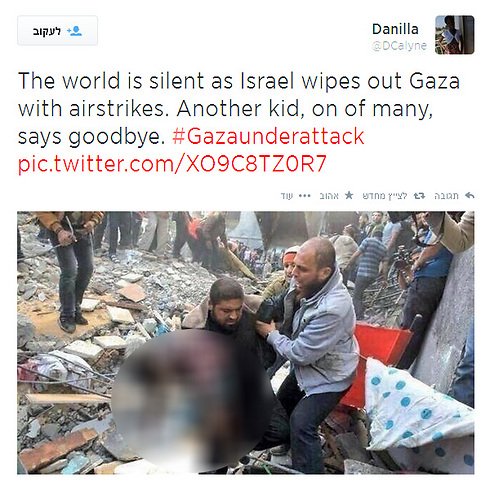 But a search of Google Images found the photo was taken in 2012 during Operation Pillar of Defense. The boy in the photo was killed along with his family in an Air Force attack.

Hamas has used this tactic in the past too. Tazpit's Anav Silverman reported in 2012 that during Operation Pillar of Defense, the militant organization used fake images of Gaza with false headlines, inciting a flurry of comments on Facebook against Israel.

The photos were of massacres that occurred in Syria the previous month, but were depicted as massacres of Gazan families by the IDF. Other such incidents reoccur persistently.

Ynet contributed to this report.