The IDF dramatically escalated its aerial assault in Gaza Thursday, targeting Iman Siam, the head of Hamas' rocket arsenal in Gaza, as well as hitting hundreds of Hamas targets.

The Arab-language IDF spokesperson reported that the IDF had killad Siam, but later updated their report, saying the army had hit him. Hamas' military wing, the Izz ad-Din al-Qassam Brigades denied claims from that Siam had been killed in an attack saying, "He is continuing in his Jihadist actions. We call on the media to be precise and not trust the lies of Israel."

According to Palestinian reports, as of Thursday morning, a total of 79 Gazans have been killed in attacks by the IDF since Operation Protective Edge began late Monday night. 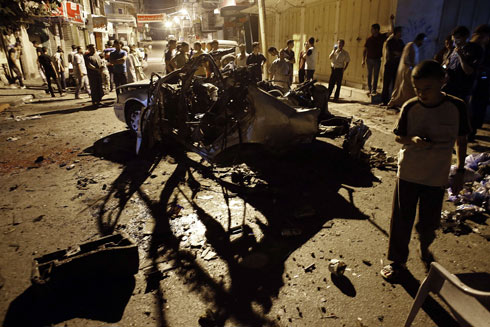 Meanwhile, the IDF reportedly targeted a senior Hamas commander, hitting his northern Gaza home. The man was reportedly jailed in Israel, but was freed as part of the prisoner exchange deal which saw Sgt. Gilad Shalit freed from Hamas captivity.

Hamas reported that five-year-old had been killed in an IDF attack in Beit Lahia in the north of the Gaza Strip. Afterwards, the air force hit a car traveling in the northern Gaza Strip, killing three Hamas terrorists en route to launch a rocket.

Regarding the seven Palestinians killed, the IDF had no immediate comment on what Palestinians claim was the deadliest single bombing raid since the start of the offensive. 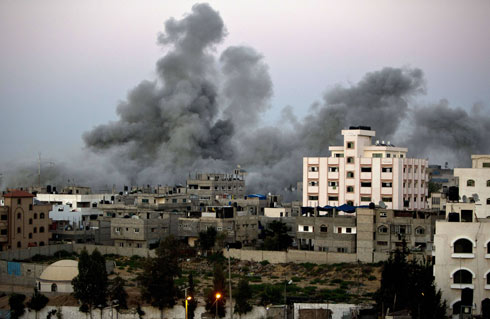 79 Palestinians have been killed in the violence, more than 50 of them civilians, Palestinian medical officials said.

Earlier, at least eight others were killed when a strike hit a Gaza beach cafe where they were watching a World Cup semifinal match between Argentina and the Netherlands, said Mahmoud Sawali, who said he lost at least two of his brothers in the attack.

A senior military source spoke with Ynet about the possibility of expanding Operation Protective Edge with a ground operation in Gaza, saying: "We are considering all kinds of things. We have lots of different targets to attack from the air. The decision on the timing of a ground operation will come in two or three days."

IDF Spokesperson's Unit chief Brig. Gen. Moti Almoz said Wednesday night that the military was "not taking any steps lightly" and warned Hamas against continuing its rocket attacks on Israel. "If there is no quiet – we will act."

Almoz said the IDF had thousands more targets it could strike in the Gaza Strip and that "everything is on the table." The brigadier general emphasized: "If we need to act, we will not hesitate."

"The army is ready for all possibilities," Prime Minister Benjamin Netanyahu said earlier Wednesday after holding a meeting of his Security Cabinet as rockets continued to rain on Israel.

"Hamas will pay a heavy price for firing toward Israeli citizens. The security of Israel's citizens comes first. The operation will expand and continue until the fire toward our towns stops and quiet returns."

Defense Minister Moshe Ya’alon said that Operation Protective Edge is set to expand, and similar comments were made by the IDF spokesperson, indicating the IDF was still mulling a ground operation in Gaza.

The rockets have caused no serious Israeli casualties, but the barrages have paralyzed business in southern communities and sent hundreds of thousands of people scrambling for shelter. A rocket struck on the outskirts of Haifa to the north on Wednesday.

Hamas's armed wing said it fired six rockets at Israel early on Thursday. Confrontations were also reported at sea where Palestinian militants in Gaza said they fired mortars and rockets at Israeli gunboats shooting at the coastal territory.