IAF attack in the Gaza Strip

Take care of missiles, not Hamas

Op-ed: The problem in Gaza should be redefined: Israel needs to get the missiles out of Hamas hands, not remove the Hamas leadership.

One of the most disturbing conclusions I came to after more than four years as cabinet secretary is that the majority of Israel’s security establishment, which consists of the prime minister’s support system and the political echelon, focuses its expertise on the “battles of yesterday” and exhausting these  conclusions. What they do not do, is take into account the rapid changes during the same timeline.

While this is a skilled and thorough approach, it is also short-sighted, turning its gaze mostly backwards. This has been demonstrated in tactical incidents such as the Mavi Marmara raid and the Gilad Shalit prisoner swap, as well as historical episodes such as those in Egypt, Syria and the current conceptual fixation with Jordan.

There is no one in the defense establishment who thinks otherwise: You've heard one, you've heard them all. The Military Intelligence Directorate, the Planning Directorate, Mossad, Shin Bet, the National Security Council – they are all of the same mind and they have no room for doubts.

It seems that Operation Protective Edge will fall into the same trap of yesterday’s insights, dealing mainly with damage reduction and the IDF returning home peacefully, rather than redefining Israel’s objectives whilst bearing in mind an ever-changing world. 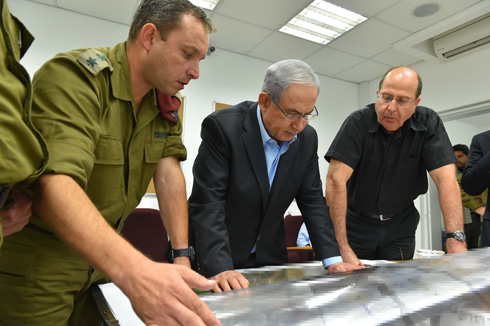 In a nutshell, Israeli strategy stems from the working assumption that there is a moderate Palestinian Authority and a rebellious Hamas-controlled Gaza Strip. Israel’s prime interest is reinstalling the PA in the Gaza Strip, and hence its objective is to bring an end to the Hamas rule.

This strategy was at the core of Operation Cast Lead in 2008, as well as for the trade restrictions in Gaza that quickly followed. Over time, it became clear that this strategy could not be sustained, due to the price it exerts in bloodshed and in The Hague. And ever since Israel reached this conclusion, it has been standing helpless in the face of clashes with Hamas of varying intensity.

The strategic dead-end in Gaza prompted Israel to pay the price of Operation Pillar of Defense, in the form of hush money to Hamas.

And calm was not only met with calm, but also with an Israeli decision to cancel the "security parameter” (a hundreds-meter strip beyond the Gaza border, to which Palestinians were prohibited from entering); for the first time Gazans could work the fields (and dig the tunnels) that reach the security fence.

But instead of an effective sterile area in Gazan territory, a sterile area was created at the expense of Israeli agriculture. The hush money was paid, but as usual, the calm was shattered once again. Now, we can and should end our fixation and change the rules of the game.

Firstly, the problem must be defined: It’s not the Hamas rule that we have take care of, but the stash of missiles in Gaza. Israel should stop dabbling in Palestinian politics, and play a role in the struggle between the PA and Hamas.

Drawing a logical conclusion from the international move to disarm the chemical weapons in Syria (without resulting in Asasd's downfall), we should take advantage of the momentum of Israel’s offensive to present a real threat to Gaza's militant groups – a roadmap for the removal of the missiles.

Israel could harness the Americans, Europeans and Egyptians for such a move – for the citizens of the latter, the arsenal in Gaza violates the stability and impacts on their interests in Sinai. The Egyptians - who in the new al-Sisi era have demolished the smuggling tunnels for the first time - are the ones who should take control of the rockets at least temporarily.

In addition, Israel needs to redeploy inside the northern border of the Gaza Strip, and seize a “territorial deposit” in form of a security strip for Ashkelon and its sister cities. There was no reason to withdraw from that area, as Ehud Barak explained prior to the disengagement.

Once again, theoretical legal considerations resulted in a twisted outcome. Given the need to both exact a price for Hamas’s growing aggression and to create effective pressure levers, there is full justification for temporary Israeli control in this empty territory, while conditioning withdrawal only on solving the problem of the missiles.

Finally, the time has come to factor Mahmoud Abbas into the equation of dealing with Gaza. After Abbas declared the unity government and took overall responsibility for the entire Palestinian people, he should take political responsibility for the disarmament of weapons that target populated Israeli areas. Abbas cannot continue to have his cake and eat it too.

The Palestinian president cannot enjoy the fruits of unity in the international arena, establish strategic legal abilities in those international institutions that would tie our hands in the face of attacks by Hamas, condemn us under every green tree – and at the same time detach itself from the Gazan aggression as if it were watching from the bleachers of a game by a foreign country.

Israel will not be able to diminish the Palestinians’ strategic interest in unity, but it can try to use that unity to its own advantage. If Abbas creates unity – he creates responsibility.