Over 600 rockets fell inside Israel, over 140 intercepted so far

Iron Dome intercepts 2 rockets over Tel Aviv after Hamas threatens major attack; rocket intercepted over Modi'in for the first time; over 80 rockets fall inside Israel on Saturday, over a half dozen intercepted.

Rocket attacks from Gaza continued unabated Saturday, with multiple areas of southern and central Israel coming under fire. At least two people were wounded in the strikes Saturday, a day after an 80-year-old woman was pulled from the wreckage of her home in Be'er Sheva.

Since the beginning of Operation Protective Edge, 605 rockets fell inside Israel (84 on Saturday). and 143 rockets were intercepted by the Iron Dome missile defense system (at least 6 on Saturday).

Police had to disperse some 100 people who gathered at an Iron Dome battery site in central Israel.

Prior to the barrage at central Israel, Hamas has announced it would fire at Tel Aviv at 9pm.

Code Red was also sounded in Ashdod. A rocket exploded on Highway 3, between Kiryat Malachi and Ashkelon. No one was hurt. A fire broke out in a moshav in the Be'er Tuviya Regional Council from a rocket shrapnel that exploded there.

At around 8:45pm, the Code Red rocket alert siren was sounded in Ashdod and the Hof Ashkelon Regional Council. A rocket was intercepted over Ashdod.

At around 7pm, rocket alert sirens were sounded in Jerusalem, Beit Shemesh and the Dead Sea area, as well as in various communities near the Gaza border. Bethlehem and Hebron were hit by rockets fired from the Gaza Strip on Saturday night.

At 6:07pm, rocket alert sirens were sounded in Rishon Lezion, Ashdod, Nes Ziona, Yavne, Rehovot, Ramle, Lod, Gan Yavne and others. A total of 9 rockets were fired at the Ashdod and Shfela area. The Iron Dome intercepted at least two rockets over Ashdod, and shrapnel fell in one of the streets in the city. Several rockets fell in open areas.

The Code Red rocket alert siren was sounded at around 3:30pm in Sderot and in the Eshkol and Hof Ashkelon regional councils. A rocket exploded in an open area in Be'er Sheva and three other rockets fell in open areas in the Merhavim Regional Council.

At around 2pm Saturday, a rocket struck the road leading to a house in the southern community of Netivot. Two teenagers were treated for minor injuries - a 16-year-old boy with a head wound and a 19-year-old girl. Both had been running for cover when the rocket struck. The two were taken to Soroka Medical Center in Be'er Sheva for treatment. The rocket caused damage to the home, a car and the road. 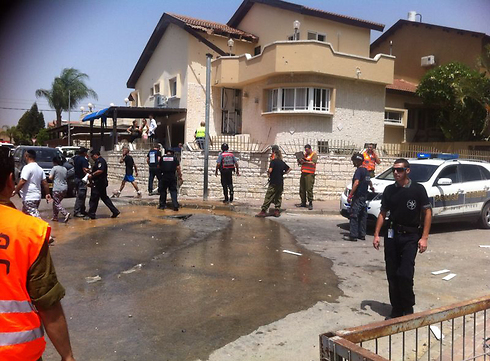 Shortly after 1:30pm, Code Red rocket alert sirens were sounded in Be'er Sheva, Dimona and Yeruham. Hamas' military wing, the Izz ad-Din al-Qassam Brigades, claimed responsibility for the rocket fire, saying they launched three rockets at Dimona. The organization also claimed to have fired three rockets at an IDF base in Ofakim. At least one rocket fell in an open area outside of Be'er Sheva.

At around noon, Code Red alerts sounded in Ashdod, Ashkelon, the Eshkol Regional Council and Kiryat Gat in the south, and Nes Tziona Yavne and Rehovot in the center. Iron Dome is believed to have intercepted at least two rockets over central Israel.

The Iron Dome missile defense system maintained its impressive record by shooting down a rocket over Be'er Sheva while two others fell in open areas near the southern city.

On Thursday night, an 80-year-old woman sustained moderate wounds when her home was demolished in a rocket strike. The woman was pulled from the rubble of her home by rescue personnel after the strike, which also damaged some surrounding homes.

The house collapsed after the rocket apparently struck a gas cylinder, causing it to detonate. Several other people were treated for shock.

Egypt's security forces seized 20 Grad rockets being smuggled in from the Gaza Strip through a tunnel by militants in northern Sinai, security officials said Friday. The rockets, along with their launch pads, were seized late Thursday after a firefight between security forces and militants in the town of Rafah bordering the Palestinian enclave, they said.

On Friday, Egypt closed the Rafah-Gaza crossing, a day after opening it to take in Palestinians wounded in the Israeli airstrikes.

AFP and Nimdor Semel contributed to this report.