It's time for Abbas to join war on Islamic terror
Photo: AFP

Analysis: Complete demilitarization of Strip is not enough; solution should include termination of Hamas rule.

Operation Protective Edge has caused a lot of frustration in the Arab world, emphasizing the many rifts in the Middle East. The Arab press reported Monday that there have been 167 "shahidim" (martyrs) in the Gaza Strip so far, and all sides in the Arab world condemned "the Israeli massacre of Palestinian civilians."

The Arab world hopes that the activation of the expensive Iron Dome system will lead to an economic crisis in Israel, but is at odds over whether the escalation is worthwhile. Despite the broad agreement over "Israel's brutality," the war in Gaza has raised harsh criticism against Hamas on the one hand and the Egyptian leadership on the other hand.

Like in the crises in Syria and Iraq, the Arab response is characterized by exchanges of accusations.

Many commentators have raised the following questions: "Will the abduction and murder of three settler teens lead to the liberation of the occupied lands?" or "Doesn't the rocket fire from Gaza give Israel an excuse to bomb the Strip?" 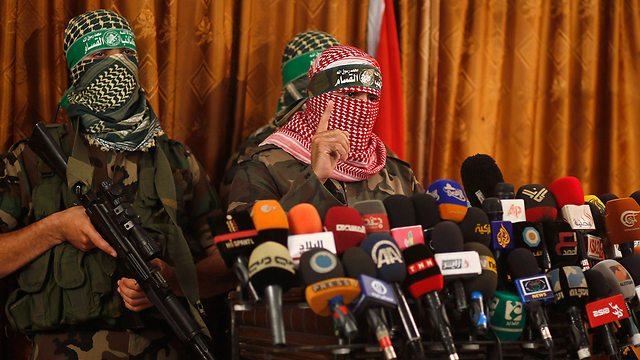 While the crisis which began with the teens' kidnapping only united Israel and exposed its mental and military strength, it revealed the Arab world in a state of weakness, desistance and a deep internal rift. Why was the current timing of creating the war the worst for Hamas? Is there a way out of the crisis?

Most Israelis were surprised by Hamas' missile arsenal and long-range rockets revealed in the current round. Instead of weakening Hamas in the IDF's operation, its operational abilities are improved in every round. 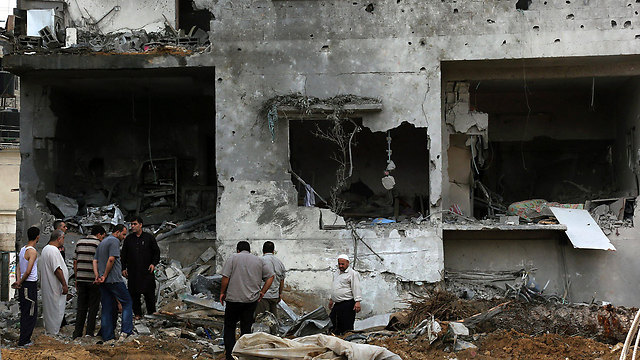 But this time Hamas is in an unprecedented state of isolation. Hamas' betrayal towards the Syrian regime and its shift to the rebels' side have affected its relations with Syria and its ally Iran. The revolution in Egypt in the summer of 2013 led to the termination of the Muslim Brotherhood regime, which Hamas was affiliated with. So how did Hamas accumulate such a large amount of missiles and increase their ranges?

The "tahadiya" (lull) at the end of Operation Pillar of Defense in November 2012 was sponsored by then-Egyptian President Mohamed Morsi of the Muslim Brotherhood. The Mubarak regime had turned a blind eye to the smuggling of weapons from Sinai to the Gaza Strip, while the Muslim Brotherhood encouraged the Strip's armament since rising to power in June 2012. The transfer of weapons from the Strip to Sinai eventually jeopardized the Egyptian soldiers and led to an internal crisis between the army and the Morsi government.

Within a period of about eight months, from Morsi's "tahadiya" to the revolution in which he was ousted in July 2013, Hamas accumulated its current missile arsenal which Israel has been targeted with in the past week. New President Abdel Fattah al-Sisi declared war on the Muslim Brotherhood and outlawed both the Brotherhood and Hamas.

Since al-Sisi's rise to power, hundreds of smuggling tunnels have been destroyed between the Gaza Strip and Sinai, not for Israel's sake but in order to block the flow of terror from Gaza to Egypt. This situation has halted the military supply to Hamas and has also led to economic suffocation. 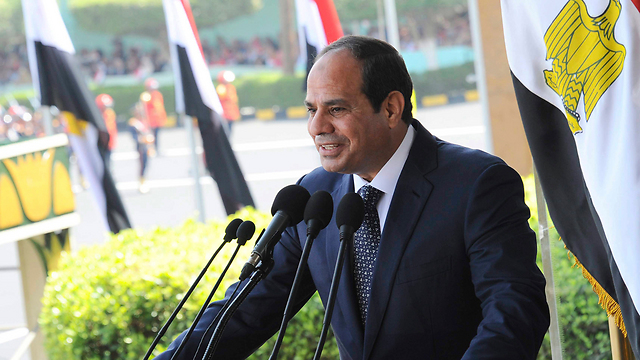 Jordanian commentator Yassir Zaatara claimed that President al-Sisi was cooperating with Israel in the fighting in Gaza, on the political and intelligence levels, in order to thank its government for its support in the revolution against the Muslim Brotherhood.

Running out of money

With the absence of aid from Egypt or Iran, Hamas has been left without any support or budget since the summer of 2013 and has recently failed to pay salaries. About 40,000 government workers and members of the security organizations have not received their wages for two months now and have protested the decision, some firing at ATMs.

The Palestinian Authority workers, on the other hand, are still receiving their salaries, including those living in Gaza.

Because of the month of Ramadan, the economic crisis is only getting worse. Gaza's residents were unable to properly prepare for the month of fasting, in which families' expenses usually rise. Qatar is the only country willing to transfer funds to Hamas, but the banking system is blocking the transfer of funds to terror organizations, and so the aid is delayed. In addition, Qatar is being harshly criticized by Saudi Arabia for aiding the Muslim Brotherhood.

The Gaza missiles which hit the Bethlehem and Hebron area may not have been accidental. Palestinian President Mahmoud Abbas condemned the abduction of the three Israeli teens and demanded that Hamas return them. The Palestinian security organization fully cooperated with the IDF. 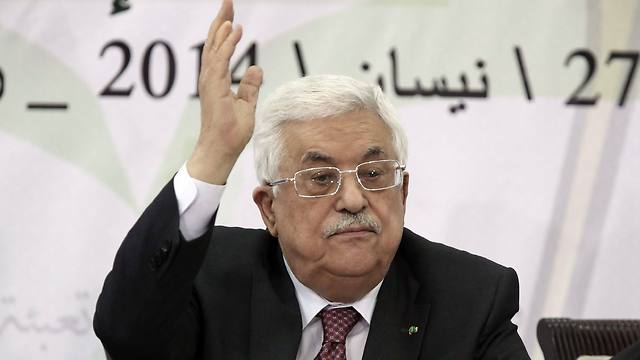 Palestinian President Abbas has been considered a traitor by Hamas since condemning the teens' abduction (Photo: EPA)
This step was perceived by Hamas as an act of betrayal. In fact, the teens' kidnapping led to the termination of the Palestinian reconciliation agreement signed between Hamas and Fatah in April.

The teens' kidnapping appears as a Hamas failure. The organization had planned a bargaining abduction in order to release prisoners and reduce the criticism against it in Gaza.

The abduction was intentionally carried out in the West Bank area. The Hamas leadership deluded itself that under the reconciliation agreement, the Palestinian Authority would avoid cooperating with Israel.

Hamas had hoped that carrying out the operation in the heart of the Palestinian Authority would trigger a chain reaction: A wide-scale IDF operation in the West Bank would lead to protests with many casualties, sparking a third intifada. The Islamic Movement in Israel was supposed to inflame Israel's Arabs and make them join the protest and set the entire country on fire.

But everything went wrong for Hamas – the abduction, the intifada and the Israeli Arabs' protest. So it moved on to Plan B.

War is sometimes a last resort, when there is no chance to solve the economic and political problems.

The firing of missiles at Israel is aimed at justifying aid from Iran, which has been constantly pressing for renewed fighting against Israel. Because the Hezbollah organization is up to its neck in the war in Syria, the responsibility for the "moukawama" (resistance) has been moved to Hamas.

But Hamas must justify the Iranian aid by firing at Israel, and simultaneously prevent the flow of funds to competing organizations, led by the Islamic Jihad.

Hamas and the Islamic Jihad are tactically cooperating right now, but the Jihad increased the level of demands for a ceasefire, pressuring Hamas. While Abbas called for a ceasefire and urged the international community to intervene, Hamas demanded a 2012-style "tahadiya," which would include the release of the prisoners arrested by Israel following the teens' abduction. The Islamic Jihad turned down these conditions as well.

In the meantime, the Arab League ministers convened to pressure Israel to end the fighting.

The Israeli public has had enough of the regular scenario of missiles fired from the south and is demanding a long-term solution. Such a solution should create an interest on the Palestinian side to prevent the rocket fire. The occupation of Gaza by the IDF is one of the solutions, but it may carry a very heavy and bloody price. The aerial crushing cannot decide the battle.

The Hamas leadership is hiding under sensitive civilian institutions which are immune to Israeli fire – schools, mosques and hospitals. The missiles are being hidden in tunnels which the Air Force has no access to.

The only logical solution as far as Israel is concerned is a complete demilitarization of the Gaza Strip in exchange for stopping the bombings. But that is not enough. This solution should include the termination of the Hamas rule in Gaza.

Saudi and Egyptian involvement could help bolster Abbas and weaken Hamas, although restoring the Fatah rule of the Strip as a condition for demilitarization is not ideal – during Abbas' rule in the Strip there was a drop in the rocket fire, but it didn't stop. But this solution, in addition to international guarantees, appears much better than sacrificing IDF soldiers and an ongoing control of a crowded populated area, which is doomed to fail.

Restoring Abbas' rule in Gaza will be seen favorably by all sides, apart from Hamas and the Islamic Jihad. Abbas, unlike Hamas, will receive Egyptian support and economic aid from Saudi Arabia and the oil states. The efficient security cooperation with the IDF in the West Bank will apply to the Strip too.

The Palestinian president will be perceived in the territories as the person who stopped Israel from recapturing Gaza and ended the nightmare of the Hamas rule, the poverty and the Israeli bombings.

The Hamas government workers will return to the PA and get their salaries. The PA's security officers will regain the respect they lost in Hamas' violet coup in 2007. A united and reinforced rule of Gaza by Abbas could also revalidate the negotiations with Israel, which have been completely futile until now, when he barely controlled the West Bank.

The Arab world is waging a war against the Islamic terror right now: Al-Sisi is fighting the Muslim Brotherhood, in Morocco the king recently prohibited using religion in politics, and in Libya, Iraq, Yemen and Syria the generals are fighting al-Qaeda and similar organizations.

It's time for Abbas to join the current wave. After all, he sees himself as al-Sisi's ally and as a representative of the Arab national leadership. Like in the battles in Syria and Egypt, Israel will only benefit from not getting involved in internal Arab rifts.

Fatah and its fight against the rebelling Palestinian factions must be bolstered in order to allow the more moderate elements to take over the territory and outlaw Hamas, like other Arab states are doing.