Analysis: Palestinian president chose to go against Palestinian public opinion courageously, knowing that Israeli teens' kidnapping could put an end to peace process and ignite a third intifada which only Hamas stands to gain from.

In front of the cameras, at the conference of foreign ministers of the Organization of Islamic Cooperation taking place in Jeddah, Saudi Arabia, the Palestinian Authority chairman chose Wednesday to take responsibility.

In a clear and lour voice, Mahmoud Abbas renounced the disgraceful crime of kidnapping three teens in Gush Etzion, and said in front of representatives of states which have no diplomatic relations with Israel that he was determined to continue the security coordination with it.

Abbas declared that the PA would do everything in its power to make sure that the kidnapped teens are located and returned safely to their families. He asserted that this was a Palestinian interest.

Abbas chose to face the populist atmosphere on the Palestinian street courageously. The criminal abduction was accepted by many groups there as a legitimate act. Campaigns celebrating the capture of "three new Gilad Shalits" began popping up on the social media. Not only in the Gaza Strip, but also at Birzeit University, the incident was marked by handing out candy to passersby.

Despicably, under false pretense, the Palestinian terror organizations even began claiming that "three Israeli soldiers" had been taken captive. 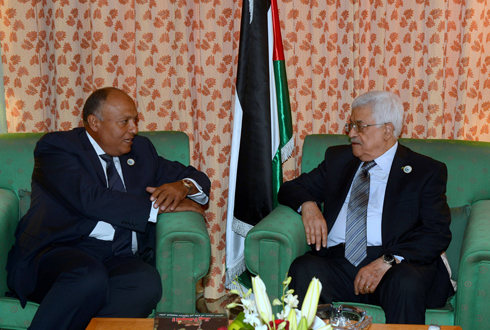 Abbas' public condemnation stems from the fact that he realizes he is facing one of the most crucial moments in his political career. His attempts to reach a reconciliation with Hamas were sincere and were made out of an understanding that the peace negotiations with Israel was stuck.

The reconciliation process was aimed at satisfying the local public opinion and reviving the Palestinian political domain ahead of parliament elections and a reform in the PLO, which would paint the leadership in new and more representative shades.

Hamas entered this process from a position of weakness following the collapse of Muslim Brotherhood regime in Egypt, the loss of its strategic stronghold in Syria and the financial crisis it has been suffering. Hamas saw the Turkish AKP party as a model of an Islamic party capable of running a state, and directed its moves at becoming a political movement.

But the movement's terrorist foundations are too strong, and sometimes fail to obey the political echelon. There is a separation and compartmentalization between the Hamas movement's political and military arm.

By kidnapping the teens, Hamas violated the intra-Palestinian reconciliation agreement and stabbed Abbas in the back. The trust between the movements, which was built gradually, was violated aggressively. A delegation of Fatah members is making its way to the Gaza Strip as we speak to discuss the depth of the crisis.

We must not forget that the Palestinian public is waiting impatiently for the elections which, according to the agreement, will be held within six months.

Moreover, the violation of the agreement raises doubts among senior PA officials in regards to the future intentions of Hamas' military wing. If it grows stronger, will it violate the agreement again and try to take over the West Bank from the PLO, and not just through democratic means?

Abbas realized that he had no other choice but to come out strongly against Hamas in public. If he wants to continue the attempted diplomatic process with Israel, he cannot keep quiet about a criminal terrorist act of kidnapping three teens. The Palestinian leadership understands that this abduction has the potential of creating extensive violence in the West Bank, and it wishes to prevent that.

Violence can be created not only because of the many points of friction with the IDF, which is expanding its activity from the Hebron area to the rest of the West Bank. The violence is already in growing trend with a sharp rise in the number of attacks against Jews in Jerusalem's Old City and stone-throwing at Israeli vehicles in the West Bank.

Hamas is the only side which stands to gain from a rise in the level of violence. The more Palestinians get hurt, the culture of revenge and calls for an uncompromising battle against Israel increase.

So far, Israel has been managing the crisis well, and alongside the intelligence efforts to locate and bring the abductees home, it is accurately hitting Hamas' military and civil infrastructures. This is a strategic blow which will create a lot of damage for Hamas in the long run. In addition, Israel is changing the rules of the game and jailing Hamas prisoners released in previous deals.

At the moment of truth, Abbas chose to condemn the attack, talk to Prime Minister Benjamin Netanyahu after almost a year of no communication, and order full security cooperation between the sides. Abbas is doing this against the prevailing public opinion on the Palestinian street, which wants to see prisoners released at any cost, and against the voices of some activists in his own Fatah movement.

By doing so, Abbas is proving that he is a statesman. His decision to face his supporters and rivals is aimed at leaving a window open for renewing the peace process and preventing the heavy price the Palestinian public will have to pay if a third intifada breaks out.

The price of condemning terror and preserving the security cooperation in order to try to maintain a small ray of hope is a tolerable price to pay.

Dr. Ido Zelkovitz, an expert on Palestinian society and politics, is a lecturer at the Department of Middle Eastern History, a research fellow at the Ezri Center for Iran and Persian Gulf Studies at Haifa University and a member of Mitvim – the Israeli Institute for Regional Foreign Policies. His book, "The Fatah Movement: Islam Nationalism and Armed Struggle Politics," was published by Resling in 2012. His new book, "Students and Resistance in Palestine: Books, Guns and Politics" will be published soon by Routledge.