Hamas wasn't consulted, Islamic Jihad is mulling it over

Gaza's rulers have three options, but have yet to find a formula that will make all of its scattered and disparate leaderships happy.

By early Tuesday evening, Hamas had still not formally responded to the Egyptian initiative for a ceasefire, which apparently came into effect at 9am, but in reality had been violated from the start by rocket fire on Israel's central and southern communities. The organization's military wing claimed responsibility, as well as for the fire in the Carmel in the north.

Meanwhile, the Hamas leadership is in a state of deliberation and disagreement about its next steps. Some want to end the current campaign due to the extensive damage in the Gaza Strip and return to the understandings reached after Pillar of Defense in 2012, or would settle for even less than that. 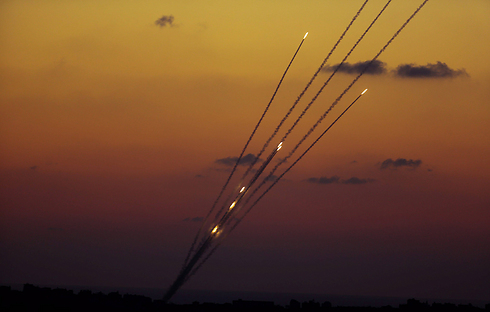 Hamas appears to have been kept in the dark about the plan, which was drafted by officials in Egypt, an ally in the era of former Muslim Brotherhood president Mohamed Morsi, and now a perceived enemy.

"No one updated us about the Egyptian proposal," said Hamas spokesman Sami Abu Zuhri. "We found out about it only through the media. No one consulted us about this initiative."

"They will not scare us with threats," Abu Marzouk said, without addressing the proposal directly. "Israel has turned Gaza into a pool of blood, and we remain opposed to the occupation and to aggression, whatever the circumstances."

Islamic Jihad spokesman Yusef al-Hasayina said that the movement had also been surprised by the initiative, but did not reject it outright.

"Islamic Jihad has reservations about the initiative, as it did not take part in the deliberations," he said. "We are still considering it (and) our reservations will be transferred to the Egyptian side."

A Hamas member of the Palestinian Legislative Council, Mushir al-Masri, dismissed reports of efforts to calm the situation, and derided Egypt for proposing a ceasefire.

"Those who ignore the Palestinian resistance should not be dealt with. "The sections calling for calm are offering a free service to the Israeli enemy," al- Masri said, adding that the decision by Jerusalem to accept the initiative was, "indicative of Israel's weakness."

The discourse within Hamas is now underway in three locations: the leadership in Gaza, headed by Ismail Haniyeh; the leadership abroad, headed by politburo chief Khaled Mashal and Egypt-based senior official Mousa Abu Marzook, who is most likely the link thread between the two. The Gaza leadership is inclined to accept the initiative and end the current situation, while Mashal and his camp may take a more radical approach in order to get better terms. 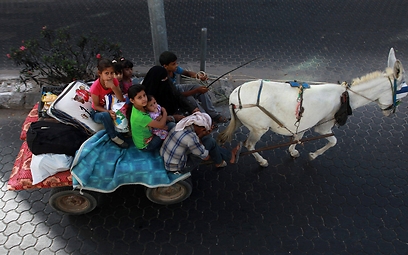 There are officials in Hamas who understand that they have paid a heavy price in the current round of fighting, and are aware of the damage it has caused. A lack of response by Hamas to the Egyptian initiative reflects a kind of embarrassment, as it comes to the conclusion that it is surrounded on all sides by parties now seeking to end the escalation, from Abbas through to regional players like Egypt, Qatar and Jordan.

It seems that the reason why there has not yet been a formal Hamas response to the initiative stems from the fact that there is still no decision that is acceptable to the leadership in Gaza, the leadership abroad and the military wing.

Egypt announced its ceasefire initiative on Monday and not before for two reasons. Firstly, the initiative required a process of maturation by all parties. Secondly, Egypt has not found a way to end the conflict due to a decline in relations between the new regime in Cairo regime and Gaza.

Hamas now has three options. First, it could accept the Egyptian initiative and political process. Secondly, it could keep firing and see a damaging escalation. Finally, it could turn a blind eye to rocket fire from other factions in Gaza, and place the blame on their shoulders.

Islamic Jihad will come out of this round poorly, even though its military wing was the first to fire on central Israel during Operation Protective Edge. But it then yielded center stage to Hamas during the current campaign, and is unlikely to challenge Hamas if it does decide to accept the Egyptian initiative.

Hamas will also come out of this finish with a negative balance in terms of regional standing. The movement failed to harness the support of the Arab world, and prominent Arab news channels have not covered the situation with intensity that they had anticipated, largely leaving Hamas alone on the battlefield.

However, there has been an upswing in Palestinian sympathy for Hamas, in particular in the West Bank and at the expense of support for Mahmoud Abbas and the Fatah leadership - beginning with the abduction of the three Israeli boys through to the Egyptian announcement of its ceasefire initiative.

In Gaza, though, things look a little different. As the days passed, the Gazan public indicated that it wanted an end to the conflict - both because of the customary poor economic situation in Gaza and because of the devastation caused there since the conflict began.

Hamas has managed during the operation to keep launching rockets, but the damage to Israel was lower than expected. The military wing also failed to make good on the surprises it had planned.

As in the previous rounds of fighting, the organization's members fired during the operation from inside Gaza's population centers, and then hid. It is for this reason that Israel failed to hit all the rocket launchers.

While it is unlikely that Hamas will try to persuade the Palestinian public of their victory, it is worth noting that in the eyes of the street, Hamas did score many successes during the current operation, a perception that has translated into sympathy and even expressions of admiration.