Security forces have been preparing for years for the next ground operation; training focused on another Lebanon war but is relevant for Protective Edge as well.

Over the years leading up to the current IDF ground incursion in Gaza, training, funding and strategic planning has been focused on just such an operation making the army well-prepared for what they are about to face in the coming days and possibly weeks.

This comment may have been made by a senior general staff IDF officer in the midst of the battle for the defense budget, but it accurately portrays the mood in the army in the days leading up to the ground operation - from the troops waiting in the dusty areas of gathering outside the Gaza border to the officers in the GOC Army Headquarters.

But the hesitation and criticism of the long wait ended last Thursday night when Operation Protective Edge entered its current phase. 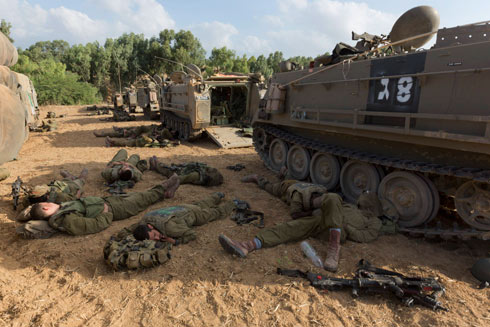 The message that the IDF official wanted to convey in late March was also evident in the field: In the past year, the IDF has spent NIS 1.3 billion in training of thousands of ground, armored, engineering and artillery troops. This does not include billions of shekels allocated for the purchase of advanced weaponry.

Ironically, the person who was training the troops for Operation Protective Edge until about a year ago will be the one to command them now inside the Gaza Strip - the Southern Command chief, Maj. Gen. Sami Turgeman, who previously served as the commander of the GOC Army Headquarters.

He is convinced that the ground incursion will lead to significant operational achievements and to a harsh blow to Hamas' infrastructure. That mostly refers to the strategic threat it poses: the terror tunnels that cover all 64km of the border, from Netiv HaAsara to Kerem Shalom, as well as Hamas' medium- and long-range rocket launchers, which are hidden under mosques and hospitals. These assets threaten the Air Force as it wants to avoid another harmful international report like the Goldstone Report.

"The troops' chances of success are high, we're counting on them. The tunnels are at the core of their training," a senior official in the Southern Command said this week on what thousands of soldiers will face inside the Strip.

It is enough to watch the battalion and brigade exercises the army's been holding in the past year, especially among its conscript troops, to be impressed by the many resources the GOC Army Headquarters is directing to training for a ground maneuver. Even though most of the exercises were aimed to prepare for a ground incursion in Lebanon, the army ensured "generic training," that would also yield effective fighting in Gaza - the most populated, and likely most tunneled, city in the world. 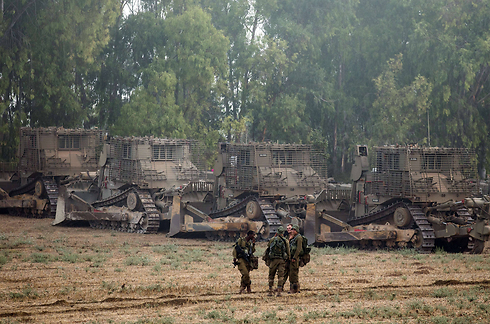 IDF troops and bulldozers after penetrating into Gaza. (Photo: AFP)

Contrary to a decade ago, today all ground soldiers are trained in highly advanced urban warfare facilities, mostly in the massive facility in Tze'elim. Tunnels were dug in these training facilities, including those in northern Israel, that cross houses and streets, much like the ones waiting for the troops in the Gaza Strip.

These drills also include fighting in the midst of "uninvolved" civilians, human shields that Hamas uses against ground invasions. Soldiers posing as the elderly or children wait inside the houses for the storming troops to drill them on how to quickly and accurately differentiate between a terrorist and an "uninvolved" civilian. Such instances often happen in pro-Palestinian rallies, where protesters and foreign photographers are just waiting for the troops to make a mistake.

"The fear of abductions is always present, so the troops are always drilling staying close to each other while advancing towards a target and attacking in urban settings, constantly backed by Sky Rider drones that provide a look from above. This way of fighting that Hamas developed is not just something faced by Sayeret Yahalom (a special engineering unit), whose soldiers are experts in such warfare," a battalion commander told Ynet during an exercise in the South in the past year.

The strategy, which is already underway, was executed as following: Ground troops were accompanied by a heavy aerial and artillery bombardment of the narrow and open strip of land between the border and the first line of houses beyond it, even before they crossed the border fence. Later on - each team was headed by heavy and armored engineering vehicles like D-9 bulldozers, to locate and safely dispose of explosives, as well as fighters from the canine Special Forces Oketz Unit, which trains closely with the troops.

On top of that is what IDF Chief of Staff Benny Gantz (a former commander of the GOC Army Headquarters himself) has made a national priority: Technological cooperation and connectivity between the troops, which is continuous in cyber space, all the way down to the platoon commander who will fight in Shuja'iyya or Beit Lahia.

As part of the Computer Service Directorate's "Digital Ground Forces" project, the commander on the ground could see what the UAV flying overhead is photographing, the corner of the next street, and the spread of troops in the close vicinity, all on a small screen on his arm. Red dots will show him exactly where the terrorists are hiding, while blue dots with different symbols will mark the location of friendly troops in the area. In this manner, a tactical commander will have the accurate intelligence he needs in real time.

The ground troops' cooperation with the Air Force has undergone a significant upgrade in the past year. The regiment commander can now contact fighter pilots directly in order to ask for their assistance with a minimum amount of interference in between.

"The IDF has prepared a lethal maneuver that is protected by active countermeasures like 'Trophy' operating with Merkava Mark IV tanks," army officials said.

The extensive preparations to the joint ground maneuver were mostly made for fighting in Lebanon, which led to hesitation about the Gaza operation, as the Strip is relatively "small."

"In the past few days, we went into our armored vehicles and prepared to enter the Strip and then got called off in the last moment, every single time, because there was still no green light from higher up. This happened over and over again," a Paratrooper fighter told Ynet. A ground forces officer even protested that "we're being made into tools of strategic deterrence, just like the Dimona reactor."

On Thursday night, however, things sounded completely different. "We're determined to succeed in our mission," one of the Paratroopers told us a moment before going in, when it was already clear: All of the IDF's training is now being tested out on the field. The IDF is in Gaza.