How Gaza became an underground monster

Analysis: IDF has unearthed 13 tunnels as part of its ground operation in Strip in past two days, dealing Hamas both a financial and a moral blow.

The IDF is taking pride in the number of tunnels unearthed in the past two days as part of the ground activity of Operation Protective Edge, and rightfully so: Beyond the possible terror attacks which have been thwarted – like the attempt to infiltrate a community in the Eshkol Regional Council on Saturday – Hamas has suffered a serious blow, both financially and morally.

The cost of each tunnel, some of which extend over hundreds of kilometers, is huge. There are hundreds of people in the Strip whose only purpose in life is to dig.

In general, the tunnel issue is defined in Gaza as a national flagship project. It includes three types of tunnels: The smuggling tunnels on the Philadelphi Route in Rafah, the offensive tunnels along the border fence with Israel, and the strategic tunnels inside the Gaza Strip which are meant to be used mainly for mobilizing forces between areas at times of emergency, but also for firing rockets, mine laying and kidnapping.

A tunnel uncovered by a Nahal force (Photo: IDF Spokesperson's Unit)
In the past few years, some of the tunnels have been turned into launching pits in which rocket launchers are hidden. The launchers operate from a hatch which opens, and return to the hidden area immediately after firing the rockets. The use of the tunnels as launching pits is the result of the lessons learnt following Operation Cast Lead: Senior members of the Gaza factions' military wings estimated that the rocket launchers served as a very easy target for the IDF due to the Israeli technological supremacy. At first they tried to fire from populated areas, from schools and even from cemeteries, but the relatively accurate thwarting of these attempts required a different solution, and they decided to use the tunnels. In addition to improving the rocket fire, the tunnels also provided a hiding place for the activists. A large part of the Gaza leadership and the military wing's top commanders survived thanks to these tunnels. The contribution of these tunnels proved itself during Operation Pillar of Defense in 2012, and their use only increased later on.

One person in charge of each tunnel

One of these tunnels was unearthed near Kibbutz Ein Hashlosha last year. Its entrance was located near the Southern Gaza Strip city of Khan Younis. It's not the only one: According to estimates, there are additional tunnels in Gaza which end under Israeli territory, and there are usually large gaps between them. The reason is the attempt to ensure – especially if the tunnels are also being used as launching pits – that even if one of them is destroyed in an IDF bombing, the rest will not be damaged. 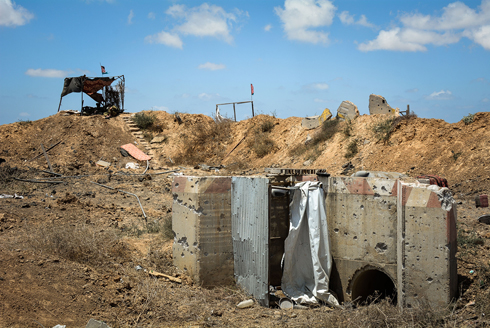 One of the tunnels unearthed during the ground operation (Photo: IDF Spokesperson's Unit) 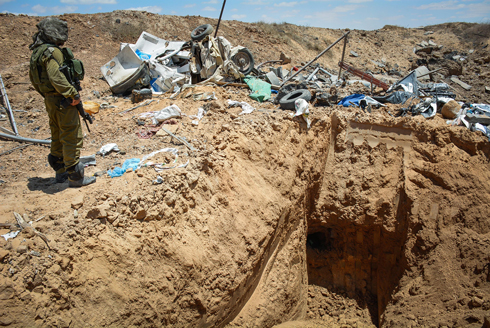 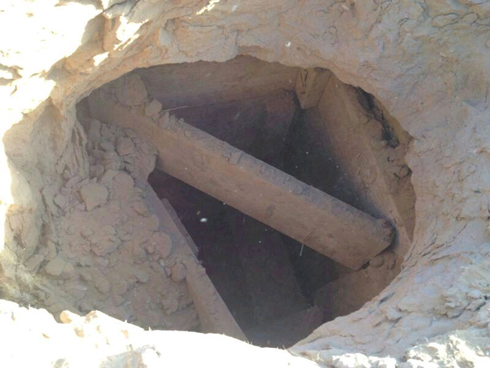 A terror tunnel uncovered near Ein Hashlosha a year ago (Photo: EPA)

The Gaza tunnel project is organized, calculated and does not leave any room for piracy. It is coordinated between all the factions' military wings and includes the registration of all the tunnels in the Strip, including the tunnels' routes, the ways to enter them and the destination according to which they are mapped.

Each military wing in the Strip is permitted to dig a tunnel only after coordinating the activity with the person in charge of the district. An average dig takes about four months. Most of the tunnels are dug by hand during the night, and each tunnel is accurately calculated.

The factions have defined every part of the Strip as eligible for a tunnel for military purposes. When a tunnel is dug near the border fence, those responsible for it notify the land owner, subject to security coordination, and stress the structural separation: Everything above the ground belongs to him and everything under the ground is under the responsibility of the military factions. If needed, he will be financially compensated. Thus, some of the land owners know that there is a tunnel under their lands, but they are unfamiliar with its route.

In the beginning of Operation Protective Edge, the IDF attempted to destroy tunnels by attacking them from the air, but after 13 terrorists tried to infiltrate Kibbutz Sufa through a tunnel and carry out a major attack, it was decided to launch a ground operation first and foremost in order to target the tunnel infrastructure.

A senior military source reported Saturday that "in a maneuver of a day and a half, we managed to significantly damage Hamas' tunnel system. In less than 24 hours, Hamas lost 13 tunnels. They are the apple of its eye. We are carefully talking about depriving it of its tunneling abilities."