Two Palestinians were killed in clashes with security forces at the Qalandia checkpoint north of Jerusalem Thursday night, as part of an anti-Gaza operation protest that turned violent and saw over 10,000 Palestinians attend. Some 39 Palestinians were arrested.

Police said the Palestinians fired live rounds at them, and the al-Aqsa Martyrs' Brigades has claimed responsibility for the gunfire. The two Palestinians were identified as Mohammed al-Araj, 19, and Majad Suffian, 27.

Youths set off fireworks and threw stones at Israeli officers who responded by using crowd dispersal measures, and according to reports from the scene they also fired rubber bullets. 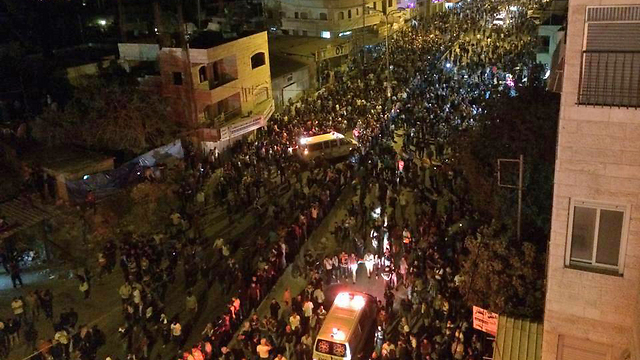 The Palestinians claim that five people have been wounded in the clashes so far.

Five policemen sustained light wounds from fireworks thrown during riots that broke out in Jerusalem's Temple Mount and ten Arab youths were arrested on suspicion of involvement in the riots. Protestors also shot fireworks in the neighborhoods of Abu Tor and East Talpiot. In addition, riots were reported in the East Jerusalem area of Shuafat. 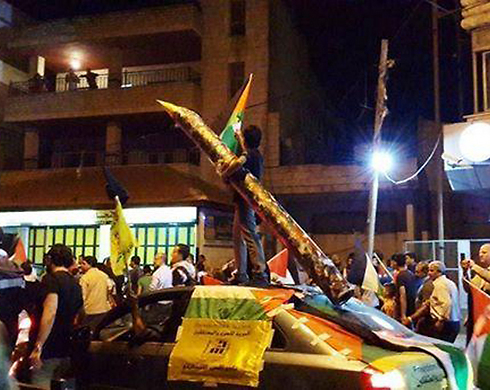 Hamas responded to the protests, calling them an "important development". Hamas' spokesman in Gaza said: "The West Bank is fighting. It is important these protests stand and spread across the West Bank".

Security forces in the capital received reinforcement in the Old City on Thursday night in light of concerns that violent demonstrations would erupt on the occasion of Laylat Al-Qadr (Night of Destiny) celebrations, which marks the day the Qur'an was revealed to the Prophet Muhammad.

In the West Bank, more than 10,000 demonstrators from Ramallah gathered at Qalandia, a large military checkpoint that controls the entrance to Jerusalem, AFP reported.

Clashes broke out in a amid what AFP described as a "very tense atmosphere", and six Palestinians were wounded by gunfire, Palestinian medical sources claimed.

In addition, 150 demonstrators gathered in Jaffa to protest against the offensive underway in Gaza, a "very large police presence" was felt in the area.

Noam (Dabul) Dvir and AFP contributed to this report