A new survey by the IDI shows that most Israeli Jews predict further fighting with Hamas, do not expect long-term quiet.

An overwhelming number of Israeli Jews believe that the ongoing military operation in Gaza is justified and that the IDF has not used excessive firepower, according to a new series of polls by the Israel Democracy Institute. 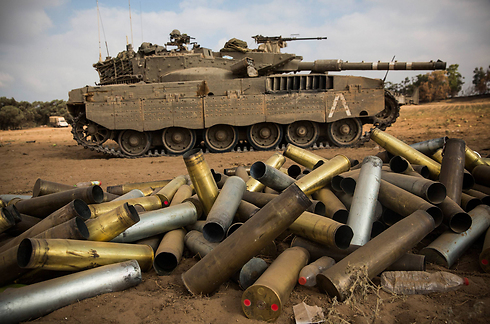 The respondents also indicated a reluctance to halt the operation even temporarily as long as the rocket fire on Israel from Gaza continues. An average of 80 percent were opposed to a unilateral ceasefire lasting up to 48 hours if the rockets did not stop, and an average of 65 percent disagreed with an immediate ceasefire so as to negotiate a long-term calm. Furthermore, an average of 60 percent of respondents said there should be a ceasefire only after "an agreement on the conditions for sustaining quiet is reached."

A majority of respondents also believed that the operation would not put an end to the fighting with Hamas, with an average of 64 percent predicting a further clash. Only an average of 18 percent of respondents said they believed there would be long-term quiet similar to that which came into effect after the 2006 Second Lebanon War.