Israeli delegation to return to Cairo for talks on Sunday; Hamas spokesman says next 24 hours will determine fate of truce talks.

Accusing Israel of stalling on ceasefire negotiations, Hamas has threatened on Saturday to quit the talks if Israel doesn't start negotiating in earnest in the next 24 hours.

"There's no real seriousness from Israel. The Israeli side is intentionally stalling on his response to the Palestinian demands," Hamas spokesman in Cairo, Moussa Abu Marzouk, said.

"We won't stay for long in the talks without a serious negotiation. The next 24 hours will determine the fate of the talks," he added. "We're not interested in an escalation, but we won't accept that there's no response to our demands." 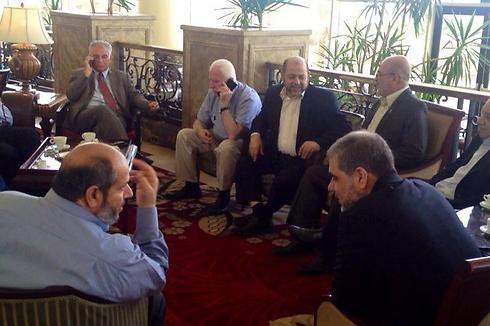 The Israeli delegation was expected to return to Cairo to resume negotiations on Sunday, after returning to Israel over the weekend, a Palestinian official said.

The Palestinian official, one of the negotiators in Cairo, did not rule out the announcement of a temporary lull ahead of Sunday's talks.

Earlier Saturday, AFP reported progress made on two important issues - opening of the Rafah border crossing, and the Palestinian demand for a seaport.

According to a Palestinian source quoted by AFP, the Egyptians have "agreed with the Palestinians on a new draft of understandsings" that would be submitted to the Israeli delegation on Saturday night when it was reportedly due to return to Cairo.

As for the Palestinian demand to build a seapot in Gaza, AFP reported those discussions would be postponed, and conducted at a later date between the Palestinian Authority and Egypt, thus removing the issue from negotiations with Israel.

The Egyptians reportedly told the Palestinian delegation that the issue of a Gaza seaport and the Strip's airport would not be part of the negotiations with Israel when they arrived in Cairo to start talks.

The important issue for the Egyptians in these negotiations is for Israel to allow the transfer of humanitarian aid to Gaza in order to prevent tensions inside Egypt over the conflict in the Strip.

Both sides remain apart on terms for renewing the ceasefire, with each blaming the other for refusing to extend it.

A diplomatic source familiar with the talks told Reuters it could take at least two days to see if it was possible to work out another truce. A sticking point was Israel's demand for guarantees that any reconstruction supplies sent to Gaza would not be used by Hamas to construct more tunnels of the sort that Palestinian fighters have used to infiltrate Israel.

Meanwhile, Hamas slammed Israel for not holding negotiations on Saturday, but still carrying out strikes, calling it a "masquerade". Izzat al-Rishq, member of Hamas' political bureau participating in the Cairo talks, said that "Israel's masquerade is exposed by the fact that it does not conduct negotiations on Saturday because it is a religious day, but at the same time continues the aggression in the Gaza Strip on Saturday ."

Another member of the group's political bureau, Qais Abu Laila, said that "during Saturday, there are no negotiations with the Israeli side since it is a religious day for Israelis; the negotiations with them will resume today at night. Meanwhile, the Palestinian delegation is continuing to talk with Egyptian intelligence officials about its demands."

Palestinian sources commented on the talks with Egypt, saying that the factions told the Egyptians that they are committed to an unofficial ceasefire in order to give a chance for negotiations and a dialogue regarding the Palestinians' demands. They added that the rocket fire from Gaza is expected to stop by the evening hours.

Meanwhile, Hamas Spokesman Fawzi Barhoum warned Saturday that the group would make 'no concessions' to Israel. "There will be going back. The resistance will continue in full force. The occupier's intransigence will get it nowhere and we will make no concessions on the demands of our people.” Barhoum said.

On Friday, Hamas rejected extending the ceasefire, but announced it was interested in continuing the negotiations. The barrage of rockets fired on southern Israel after the 72-hour ceasefire expired served as proof of Hamas' reluctance to halt the hostilities.