Despite the accent, Netanyahu clueless about America

Op-ed: Though he markets himself as an expert on US, prime minister responsible for deterioration in ties to Israel's closest ally.

There is no gentle, elegant or balanced way to express that, through a series of clashes with the United States, Prime Minister Benjamin Netanyahu is causing strategic damage to Israel and significantly hurting its national security. Yes. Benjamin Netanyahu. The man who markets himself as an America-ologist – a world-renowned expert to the subtlety of American politics with an American accent and a proper tie to match – has simply gotten lost. Netanyahu's America, that of the late 80s, no longer exists – and he's the only one who has yet to internalize that fact. Since 2009, when Netanyahu was elected prime minister – three months after Obama's election to the US presidency – a critical mass of crises has built up between the close allies, and both the amount and the significance of the vitriol have reached a situation where they trickle down from the personal level to the institutional level and to the foundation of the relations between the two states. 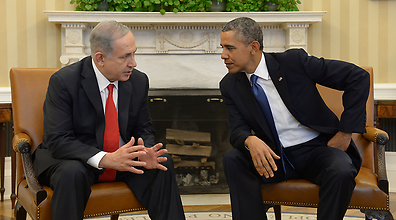 The US is a strategic asset for Israel, not the other way around. (Photo: GPO)
The essential component of this is not how much Obama "understands" the Middle East, or the extent of the legitimate disagreements between him and the prime minister, but the dearth of trust Netanyahu has with the international community, as a whole, and with the United States specifically. The responsibility for the current status of the relationship is with the prime minister, alone. Any person who tried to lay the blame for the deterioration in ties on President Obama should be reminded of the similarly weak relationship between Netanyahu and President Bill Clinton in 1996-1999. After slandering the president, trying to humiliate him in front of the cameras in the White House, callously supporting his rival Mitt Romney in the 2012 elections, allowing his ministers – especially Defense Minister Ya'alon – to vilify and sully US Secretary of State John Kerry, expressessing "doubts" over the appointment of US Secretary of Defense Chuck Hagel, and threatening every Monday and Thursday to "go to Congress," Netanyahu should not be wonder why he is not popular in Washington, D.C. Apart from Israel's ability to defend itself, there never was – and probably will never be – a more important strategic asset to the country than its relationship with the United States. Since its founding – and especially since the end of the 60s and the start of the 70s – these ties have provided Israel a superpower to lean on, a supporting pillar of military deterrence, and a force-multiplier in the international arena.

The United States has not only vetoed more than 50 anti-Israel resolutions at the United Nation's Security Council, it has also provided military aid totaling more than $140 billion, as well as access to American weapon systems and advanced ammunition. But the US has also garnered a reputation as an almost-automatic defender of Israel – its layer of protection from international isolation.

The relationship between the two countries has often been defined as "special", "extraordinary", and an "unshakeable alliance." Since the 80s, Israel has often pushed to define itself as a "strategic asset" for the United States and, though Americans have never used the phrase themselves, they have not denied it.

But on this matter there is some confusion in Israel borne of an exaggerated sense of self-importance. The strategic asset in this equation is the US for Israel, not the other way around. Since the fall of the Soviet Union there has been no struggle of superpowers in the Middle East. As of today the US is in the midst of redefining its regional interests, taking a clear – if slow – direction towards disengagement. The reasons relate to energy independence, a disappointment with the Arab world, a public opinion hostile to America's over-involvement in the world, and its attention and energy shifting to other corners of the globe. All of these have led the US to reexamine its position, its role, and its interests in the Middle East.

The alliance with Israel remains and will remain, but instead of identifying and understanding its direction and expressing anew the importance of the relationship to prevent its decline, Benjamin Netanyahu is doing the exact opposite.

The prime ministers before him – Peres, Barak, Sharon, and Olmert – approached the issue with great respect, but Netanyahu discounts it, doesn't understand it, or simply thinks he knows better. He doesn't.