Hamas is not a terror organization, but a state in the making

Op-ed: Whether we like it or not, Hamas is slowly but surely establishing itself with a disciplined army of paid soldiers, an education system saturated with incitement, and state institutions. And it has an unequivocal ideology that refuses to go away, just like the Jewish settlement of 1947.

At the end of summer 1982, a Lebanese businessman came to the firm where I was doing my internship, and told an incredible story. For weeks, he said, IDF trucks confiscated from his warehouse - the biggest in the Middle East - iron rods used for construction, claiming he and his factories belonged to Ahmed Jibril's terror organization. The man swore that these were false accusations, and asked the firm's lawyers to get back his products, worth of millions of dollars, through legal means. After a petition to the Supreme Court, the case ended in a settlement. During countless hearings with various branches of the security forces, we heard from the head of the IDF's international law division that this heinous terror organization - the Popular Front for the Liberation of Palestine - maintains creches and schools, shoe and ice cream factories, workers' unions and weapons manufacturers, spinning mills and drug-smuggling cartels. With flow charts and yellow highlighter pens, they revealed a multi-armed and particularly frightening octopus that was surprisingly similar to a societal structure we learned about in history lessons: the pre-state Jewish yishuv in 1947. A state that was on its way - complete with armed and civilian branches, institutions, factories and holdings.

Repeating our mistakes with Hamas

Hamas is not a terror organization. It's easier for us to call it that because the classification dwarfs it and aggrandizes us, and allows us to treat it as a pest that must be eliminated, rather than a political player that must be taken into account when examining the balance of power and fear in our neighborhood. It was easier for us to think this is a summer camp for martyrs, with a few hot-tempered Imams and some monstrous engineer, and that if we could only get rid of them, things would be better. We were wrong. We were also wrong in Lebanon when we failed to properly identify the cumulative power of the Palestinian organizations. This mistake marked the beginning of our sinking into the Lebanese quicksand. Are we going to be stupid enough to have to repeat this mistake?

Hamas has all the cards (Photo: Reuters)
In 1947, the Arab countries made the exact same mistake when they failed to understand to what extent 600,000 Jewish men, women and children in Palestine were far more than the sum of three military organizations at odds with one another, and which could be easily eliminated. The Arabs disregarded the ideological zeal, determination and endurance, creativity and ability to improvise, feelings of despair and the battle for the home, the ability to raise funds and acquire arms from foreign sources, despite the difficulties and the siege. Israel owes quite a lot to that mistake, which played a role in the creation of the state. Hamas is not a terror organization. It is a well-disciplined army of paid soldiers. It's an education system saturated with incitement. It is hospitals and police, creches and manufacturing, tunnels and parks, prisons and government. It has a military wing and a political wing and they're incredibly coordinated. No targeted assassination so far has been able to put a dent in Hamas' determination or in its ability to hurt us as it sees fit. Whether we like it or not, it is a state coming into being, or at least a part of one, if our rosy dreams come true and Mahmoud Abbas manages to take charge and curb his Gazan brothers.

The governments of Israel throughout the years, our senior analysts, the best of our generals and whoever else, all flooded the public discourse with talk of a "terror organization" to the point that we became too blind to see.

Firstly, we did not realize what we were doing when we encouraged the separation between the West Bank and Gaza Strip in order to weaken the PLO, and got a far worse foe. Secondly, we did not realize that the more they were oppressed, the more they multiplied and spread, to the point of hearing maniacal laughter emanating from the rubble of Gaza at the sight of rockets rolling down the road in Tel Aviv.

Thirdly, we failed in understanding Hamas' own reality - because you don't have to understand a terror organization, just eradicate it - and so we failed to understand the deep despair that is the very basis of Islamic fundamentalism, or the ideology that sanctifies a bloody dream over human life, the willingness to suffer lengthy periods of shortage and a hard siege for faith, and the choice of the promised future in paradise over the future you could build with your own two hands in this world. 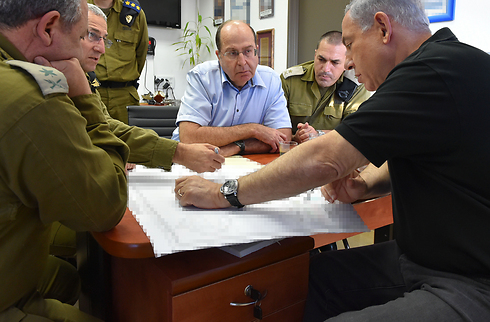 No one in the Israeli government knows when the fighting will end (Photo: Ariel Hermoni, Defense Ministry)
The result of these cumulative mistakes is a failure bigger than any Yom Kippur War. Not in the number of casualties, thank God, but in the ability to understand the neighborhood in which we live. Then, we only erred in assessing the level of willingness and preparedness of the Arab armies to start a war in which they decided when to start and what the opening gambits would be. The lack of understanding now is so complete that no one in the Israeli government has any idea how and when the fighting will end. Hamas has all the keys, all the cards and the ability to once again disrupt life here whenever it feels so inclined. Years of a lack of understanding cannot be covered by any Iron Dome, and all the accurate military intelligence is worth nothing unless it comes with the understanding of what our target is. And this target can't be to eradicate, crush or eliminate. On the other hand, it also can't be to negotiate, because we allegedly don't negotiate with terrorists. Then again, it also can't be to rely on a mix of tangled international interventions that are as fragile as a spider's web.

During this pointless round of fighting, this government must realize it was wrong, learn from its mistakes and urgently change its tune before all of its symbols of sovereignty are damaged in this struggle and before it becomes clear that it has failed in its primary and most important mission: to guarantee that we can maintain normal everyday life here. Sort of.

We have experienced quite a few empowering experiences this summer, as the prime minister told the children of Sderot. And yet the quicksand theatens to engulf us all.