Hollywood heavyweights come out in support of Israel

In petition published Saturday, stars such as Arnold Schwarzenegger, Sarah Silverman and Seth Rogen express support for Israel, say Hamas 'cannot be allowed to rain rockets on Israeli cities, nor ... hold its own people hostage.'

Scores of celebrities and power-brokers from the Hollywood establishment have come out in support of Israel and a peaceful resolution to its conflict with Hamas, with stars as diverse as Sarah Silverman, Seth Rogen and Arnold Schwarzenegger signing a joint statement released on Saturday.

The statement of support was to be published initially in Billboard, Variety and The Hollywood Reporter on Sunday, and later be featured in influential newspapers in the US.

The statement comes after weeks in which a number of celebrities, including Penelope Cruz and husband Javier Bardem, condemned Israel for its handling of  the conflict, with Cruz and Bardem even accusing Israel of genocide. But with the notable exceptions of comedian Joan Rivers and actors Roseanne Barr and Mayim Bialik, few have expressed support for Israel.

Jewish Pride
Mayim Bialik: I've lost many fans, but I'm still a Zionist
Jewish star of 'The Bing Bang Theory' explains in blog post that she loves Israel more than popularity, 'even when you make me crazy.'
http://www.ynetnews.com/articles/0,7340,L-4558733,00.html

While many of the petition's signatories are recognizable names to the general public, such as Schwarzenegger, Rogen, as well as Sylvester Stallone, Kelsey Grammer and Joel and Benji Madden, more than a few are entertainment industry heavy-hitters, including director Ivan Reitman, writer Aaron Sorkin, producers Michael Rotenberg and Avi Lerner, chairman and CEO of PMK•BNC Michael Nyman, talent manager Danny Sussman and mogul Haim Saban. Barr and Bialik, who have been outspoken in their support for Israel, are also signatories.

The statement decries Hamas attacks on Israel and its operation within civilian population centers, and condemns the organization for its charter that calls for the killing of Jews. 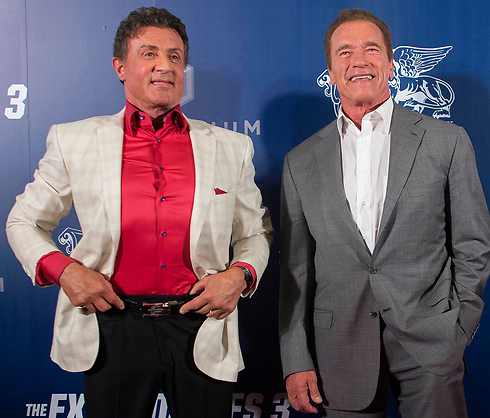 Stallone and Schwarzenegger among celebrities that voiced public support for Israel (Photo: EPA)

The petition, the largest of  its kind to ever appear in Hollywood, is the brainchild of the Creative Community for Peace, the organization says it "represent(s) a cross section of the creative world – those who create and help create music, films, and television programs – and their fans."

The statement, which appears on the organization's website, says that despite disagreements over how to achieve Middle East peace, all its members oppose the policy of "singling out Israel" for boycott. "We may not all share the same politics or the same opinion on the best path to peace in the Middle East," the statement says. "But we do agree that singling out Israel, the only democracy in the region, as a target of cultural boycotts while ignoring the now-recognized human rights issues of her neighbors will not further peace."

We, the undersigned, are saddened by the devastating loss of life endured by Israelis and Palestinians in Gaza. We are pained by the suffering on both sides of the conflict and hope for a solution that brings peace to the region.

While we stand firm in our commitment to peace and justice, we must also stand firm against ideologies of hatred and genocide which are reflected in Hamas' charter, Article 7 of which reads, “There is a Jew hiding behind me, come on and kill him!” The son of a Hamas founder has also commented about the true nature of Hamas.

We join together in support of the democratic values we all cherish and in the hope that the healing and transformative power of the arts can be used to build bridges of peace.