Who's afraid of the big, bad boycott?

Anyone seriously seeking to boycott Israeli products would have a hard time finding a real target on supermarket and drugstore shelves.

Let's start with the conclusion: Israeli exports are not affected by the present economic boycott, nor will they be affected in the future. This is not because certain European consumer groups and the like are not trying – it is because the unique nature of Israel's exports simply does not allow for it. It's a logical concept on paper, but simply does not hold water in reality.

The most obvious example of how the boycott concept is unsustainable is Israel's trade relations with Turkey. In 2010, after Cast Lead, and the Mavi Marmara incident in particular, Turkish Prime Minister Recep Tayyip Erdogan (who is now trying to change the laws in his country in order to become something akin to a sultan) demanded a boycott of Israel at every opportunity.

And lo and behold - just the opposite has happened. Trade relations with Turkey, both exports and imports, have jumped dramatically and are now at the highest level – and almost 100% rise since 2009, long before the Mavi Marmara. 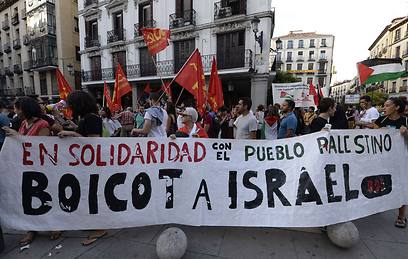 No interest in Gaza

Israel's exports are driven by thousands of companies of all kinds, with the most diverse ownership and in a wide variety of markets, albeit with a low international profile. There is no Israeli company that is considered a global brand, and hence could be used as a clear indicator.

Many Israeli companies operate in niche areas, as an OEM (Original Equipment Manufacturer) or as subsidiaries of foreign multinationals.

In addition, Israeli exports are almost never sold to the end consumer. In fact, this is the case for about 95 percent of Israel's exports, almost all of which are involved in business-to-business (B2B) trade with the large international corporations who are only interested in the best product or service at the most competitive price.

With all due respect to what is happening there, the attacks in Gaza are not a consideration in the cold world of business, nor is really of any interest.

Staying away from McDonald's, IBM, Estee Lauder, Soda Stream, Johnson & Johnson, Motorola, Siemens, Danone, Kimberly-Clark, Intel, Timberland, Caterpillar, Victoria's Secret, Revlon and many other companies blacklisted by the organizers of boycott is not really possible for the ordinary consumer.

An exploration of the websites of these companies reveals the names of very few Israeli exporters, and a multitude of huge multinationals. Israel boycotters will struggle to find products in the supermarket or drugstore, given the sheer number of massive international companies that do business with Israel.

Some of Israel's farmers who export to Europe are in the boycotters' crosshairs, yet agricultural produce only constitutes about 2 percent of Israeli exports. They are now experiencing some difficulties, but know from experience that life will return to normal once the conflict is over.

It may be possible to reduce the existing damage somewhat by diverting goods to Russia, which is currently boycotting the entry of agricultural products from Europe.

Most of the impact is felt in the factories of Ariel and Ma'aleh Adumim, both viewed as problematic by in the EU due to their location beyond the Green Line.

It is extremely unfortunate that these companies are forced to endure such censure, but the scope of their activity, in relation to Israel's overall exports, is minute, and does not constitute even one thousandth of Israel's total GDP. Looking at it on the macroeconomic level, the damage of boycotting these factories is negligible to the overall Israeli economy.

It's time to calm down and free ourselves of this blind hysteria that is being promulgated, most likely for some political end or other.

Adam Reuter is the chairman of the Reuter Meydan Investment House and CEO of Financial Immunities Ltd.