Abbas given vote of approval by more than half of Gaza residents, while Egypt seen as country that 'best backed the Palestinian Resistance.'

A vast majority of Palestinians in the Gaza Strip – 88.9 percent - are in favor of rocket fire on Israel, a new poll shows, while 61 percent say they would not want United Nations forces in the Strip. 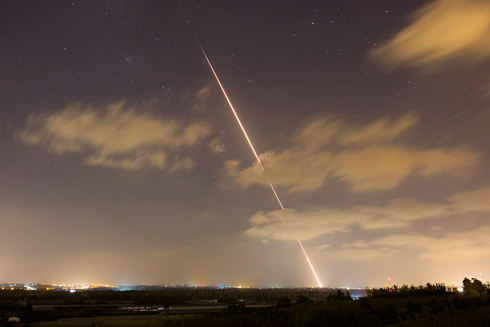 Furthermore, more than three quarters of those polled, 75.4 percent, said that they believed the resistance had increased Palestinian deterrence during Operation Protective Edge, which ended Tuesday after 50 days. Only 12.8 percent expressed the belief that it had decreased, while 8.1 percent said they thought it had remained the same.

However, with regards to attacks carried out by the Palestinian factions, 29 percent cited "specific military operations, such as the foiled infiltration from the sea as "the most successful act of the Palestinian Resistance in retaliation for the recent Israeli aggression". Another 23.3 percent said infiltrations "across enemy lines" were the most successful, while just 15.9 percent named rocket attacks and 19.8 percent identified infiltrations through tunnels burrowed under the border.

Palestinian Authority President Mahmoud Abbas is viewed favorably by more than half of the Gazan population, the poll found, with 54 percent of respondents saying that they were "satisfied" with his performance during Protective Edge. Only a little over one third, 38.6 percent, said that they were dissatisfied with his conduct.

Meanwhile, Egypt, which banned Gaza's Hamas rulers from operating there in March, was seen to be the country which "best backed the Palestinian Resistance against the recent Israeli aggression on Gaza." Almost one third, 32.5 percent, named Egypt as the most supportive nation, with major Gaza supporters Qatar and Turkey were named by just 23.5 percent and 25.3 percent of respondents respectively. Iran was identified by just 8.1 percent of Gazans.

The survey was conducted between August 14-19, questioning a random sample of 1,000 Palestinian adults in Gaza, with a margin of error of 3 percent.