Syrian militants fighting with the Al-Nusra Fron (Jabhat al-Nusra) have kidnapped over 40 soldiers from the UN Disengagement Observer Force (UNDOF) in the Golan Heights. According to report and unnamed officials, those abducted include soldiers of Philippine origin.

The news came amid massive fighting near the Quneitra crossing – the sole connections between Israel and Syria – which was seized Wednesday by rebels from Syria in some of the heaviest clashes this year, rebels and residents said on Thursday, and rebels have even posted a video showing the Israeli flag from their side of the border. The video claims that the Free Syrian Army Battalions retook the crossing.

Earlier this week, the Philippines announced they would be recalling their 331-strong peacekeeping force after a number of violent incidents. For example, last September some 21 Filipino UN peacekeepers were kidnapped by Syrian rebels, and after a week were handed safely over to Jordan.

The crossing is monitored by the United Nations oversees traffic between the two enemy countries, but the distance between the two warring adversaries' posts is some 200 meters (yards).

During the fighting Wednesday, two Israelis were wounded by stray bullets and a mortar, a soldier and a civilian, both in the Golan Heights. Israel responded with artillery fire at two Syrian army positions, the Israeli military said on Wednesday. 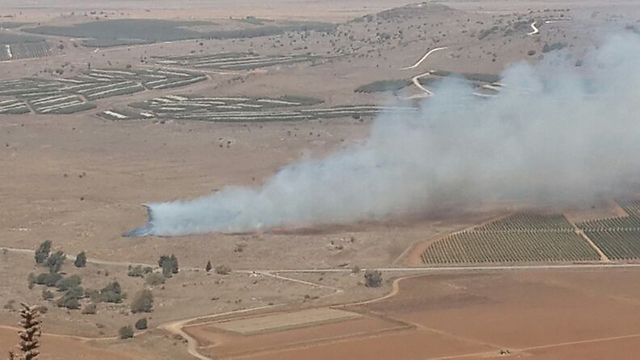 Smoke from Syrian side of Golan (Photo: Ahiya Raved)

The peacekeeping mission, known as UNDOF, was established in May 1974 following intensified firing on the Israel-Syria border after the 1973 Yom Kippur War. Israel captured the Golan Heights from Syria in 1967, and Syria has campaigned for decades for return of the land.

For nearly four decades, the UN monitors helped enforce a stable truce between Israel and Syria. But in recent months, the Golan Heights has increasingly become a battlefield in the more than three-year-old Syrian conflict.

Syrian activists say government warplanes are targeting rebels near the country's frontier with Israel in the Golan Heights, a day after opposition fighters captured a crossing point there.

The Britain-based Syrian Observatory for Human Rights says the Syrian airstrikes struck several areas near the border in Quneitra province, including the village of Jaba. The Local Coordination Committees activist group also reported government airstrikes. The Observatory says heavy clashes were raging between the rebels and Syrian military in Jaba and the surrounding countryside.

White plumes of smoke set off by exploding mortar rounds could be seen on Thursday from the Israeli side of the Golan. The sound of small arms fire could be heard echoing in the background.