The Palestinians need to learn from history

Op-ed: Time and again, the extremist rulers of the Palestinians try to eliminate Israel, only for their terrible plan to backfire; this Yom Kippur we will do their soul-searching for them.

In 1948, the Arabs of the Land of Israel aimed to eliminate the Jewish presence in the country, just as the Islamic State has now mercilessly eliminated the Christians and Yazidis it has encountered, in a move of unadulterated ethnic cleansing.

But it did not occur to the Arabs of Israel that their mission would fail.

They acquiesced - for the purposes of said extermination – to a request by the Arab armies to evacuate the country temporarily so that the slaughter of the Jews could be accomplished easy and without interruption, and then they could come back and share the spoils.

And so the Jews in Israel were astonished to wake up one day to see their Arab neighbors leaving as one. They asked them to remain: "We will protect you," they said, but the Arabs only laughed, and explained that the invading Arab armies intended to eliminate all the Jews, after which they would definitely return. "We will divide the Jewish houses and women between us," they said.

But alas, the plan failed, and all that the Palestinians can do now is howl "nakba" around the world. In any event, they intended to claim victory for themselves either militarily or, in case of defeat, by crying foul and declaring a "moral" victory.

Exactly the same scenario played out in 2014. Again, the Palestinians intended to carry out the slaughter and destruction of the Jews – using thousands of rockets stockpiled in the Gaza Strip. 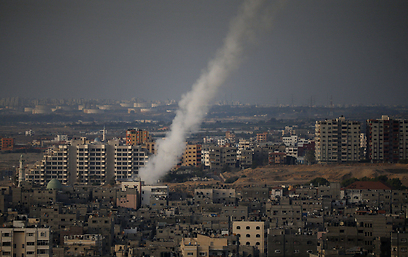 Rocket fire from Gaza at Israel

In their arrogance, they could already envision hundreds of Israeli homes being destroyed, the Jews being killed and fleeing, or genuflecting in supplication, just as their grandparents had predicted in 1948. Since World War II, there has never been such a situation in which thousands of rockets and missiles were launched into densely populated cities as happened here this summer.

But again, the destruction of the Jews did not happen, rather the opposite – those in the Gaza Strip whose homes and property were destroyed, saw their very scheme backfire. Once again, the possibility of failure never occurred to the arrogant Palestinians. So convinced were they of imminent victory that they were captivated by their own rhetoric. And, since they lost militarily, all that remains is, as usual, to cry "genocide." Those who sought to carry out their own genocide are blaming the victims, just as in 1948. 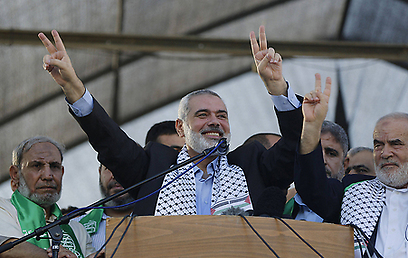 Hamas leaders in Gaza celebrating their victory in this summer's conflict (Photo: AFP)

Yet there is not one Palestinian who complains to his leaders about the disaster that they have wrought upon him, and so it again this time. The extremist leadership is hailed and celebrated, as though victorious and had not sowed the seeds of self-destruction and suicide.

So, we, the victims of these schemes, will on Yom Kippur do their soul-searching for them; proxy self-criticism for those who never engage in such introspection. It does not pay to keep on this path of trying to destroy Israel, given that each attempt simply backfires, be it a new terrorist attack, an initiative at the United Nations or some diplomatic trick or other.

Why do they not learn something from the distant or recent past? Perhaps then they could have a future too.