The road to Israeli-Palestinian peace is not through Stockholm

Op-ed: New Swedish government made an irresponsible decision to recognize Palestine, which only helps Mahmoud Abbas in his efforts to bypass negotiations.

New York. Fall in Manhattan. There's a chill in the air. Dry leaves are blown up and down the bustling avenues, and a whirlwind of emotions swirls between the skyscrapers. Big things tend to happen here at this time of the year – from terror attacks to cruel hurricanes. The city's inhabitants are on tenterhooks.

The General Assembly convenes at the UN every September. Leaders from all corners of the world make their way to Manhattan. The tiny island gets clogged up not only with hundreds of entourages but also a horde of cultures, languages and interests. Congestion creates volatility. Here, more than anywhere else, it's easy to shake the fragile international stability.

Last week, with a horrible sense of timing, Sweden decided to turn up the heat under the regional pressure cooker, which is already bursting at the seams anyway. On the eve of Yom Kippur, Stockholm released an irresponsible statement in support of the Palestinian Authority's efforts to bypass negotiations and achieve unilateral recognition of statehood.

The Palestinians learned a long time ago that while the international community sometimes condemns the use of conventional explosives, the detection devices at the entrances to the UN readily allow political explosive material into the building. Thus, while the one Palestinian offshoot obsessively stockpiles explosives in Gaza, the second lays explosives charges of a different kind in New York. The objective of political terror is identical to the objective of all other terror – the violent and unilateral imposition of facts on the ground.

In November 2012, the PA asked the international community to grant it observer status at the UN; and 138 countries chose to disregard the regime of terror in Gaza, the lack of governance and the rife-with-corruption civilian services, thereby signaling that terror trumps dialogue. Ever since, Mahmoud Abbas has been channeling his efforts towards finding ways to bypass negotiations, by appealing to various international institutions. 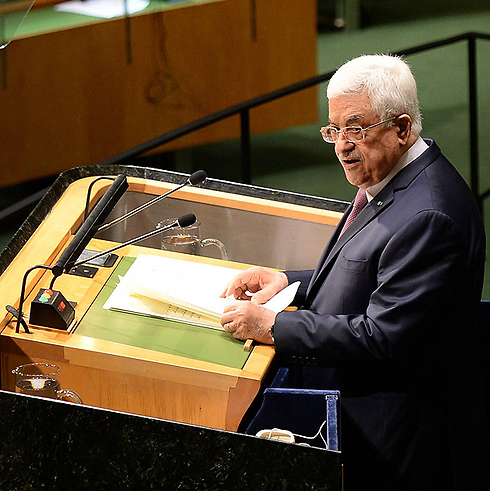 Last April, the Palestinians joined around 15 international treaties dealing, most ironically, with human rights. Most countries didn't think twice before welcoming with open arms those who hide behind children to launch rockets at children into a treaty concerned with "protecting the rights of children in armed conflicts."

The Palestinians in recent weeks have initiated yet another unilateral course of action. Following Abbas' vitriolic address at the UN, the Palestinian delegation presented the Security Council with a draft proposal with the sole purpose of stirring the pot and evading true dialogue.

The countries of the world for which the fate of the region is precious must come together to form a safety net to stop the runaway Palestinian carriage. The slightest rip in the delicate weave could give rise to damage for generations to come. International grit and responsibility are required in order to tell the Palestinians the thing that is sometimes the hardest to speak – the truth.

A country can't be bought with money or taken by the sword, David Ben-Gurion once said. It takes sweat and toil to create one. The Swedish wrench is nothing but a wrench in the works; you can't order a country from a well-designed Swedish catalogue and put it together with a bit of quick DIY – let alone when the pieces don't fit and the instructions don't make sense.

The road to peace between Israel and the Palestinians does not pass through New York or Stockholm. The distance between Ramallah and Jerusalem is a lot shorter. The Palestinians need to internalize the fact that a state created through paperwork will remain a state on paper only. The international community must convey a clear-cut message: True peace will be achieved only via direct negotiations and coming up with concrete solutions to the challenges before us.

Ron Prosor is Israel's ambassador to the UN.