Scene from the musical
Photo: AP

Critics say show is an attempt to whitewash legacy of Herbert Cukurs, who was assassinated by Mossad in South America for his role in Holocaust.

RIGA - A famous Latvian aviator who joined a Nazi killing squad during World War II is being brought to life in a musical that has outraged Jews in the Baltic country and beyond.

Critics say the show, touring theaters across Latvia until February, is an attempt to whitewash the legacy of Herbert Cukurs, who was assassinated by Israeli agents in South America for his role in the Holocaust.

But producer Juris Millers says that because Cukurs never went on trial it remains unclear to what extent he participated in atrocities committed by the notorious Arajs Commando, which is blamed for murdering 30,000 people, mostly Jews, during the 1941-1944 Nazi occupation of Latvia.

"Herbert Cukurs is still innocent if we are looking at him from a court system point of view," Millers told The Associated Press. "There are a few people who testify that he was a killer and others who say that he was a hero."

In the 1930s, Cukurs gained fame in Latvia as an aviation pioneer, with solo flights to Gambia and Japan. But during World War II, he served as a deputy to the leader of the Arajs Commando, an auxiliary police unit formed after German forces captured Latvia. The unit played a central role in the near annihilation of Latvia's Jewish community. Almost 80,000 Jews, or 90 percent of the prewar Jewish population, were killed during the Nazi occupation. 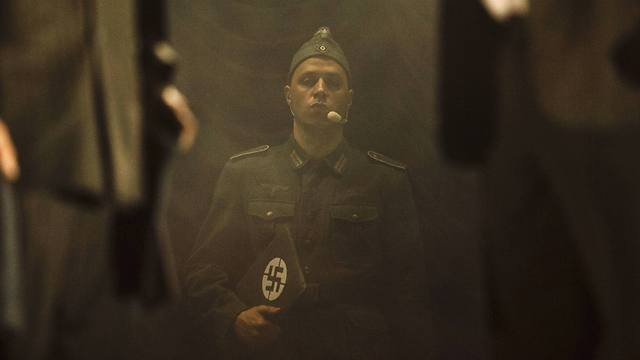 Photo: AP
"There's nothing to prove. He was a killer," said Vitali Gotlib, a senior member of the Latvian Council for Jews. "To do a musical on this man in a civilized country is unacceptable." The group has denounced the play, saying it's glorifying a war criminal. More than a dozen protesters dressed in uniforms like those worn by Jews in Nazi concentration camps stood outside Riga's Concert Hall when the musical was shown there earlier this month.

The Russian and Israeli governments have strongly condemned the show. Latvia's government has also criticized it, while noting that it's protected by freedom of speech.

"Being a member of the Arajs Kommando is not worth singing about," Foreign Minister Edgars Rinkevics said in a statement. "Let those who attend the performance appraise the production for themselves; however, the position of the government is that this is not in good taste."

The musical does address Cukurs' Nazi past, with the climax showing the aviator surrounded by people shouting "killer." Millers says such scenes prove the show does not glorify Cukurs. Critics counter that the show portrays Cukurs as a hero, thus implicitly suggesting that his accusers are wrong. After the war Cukurs fled to South America where Mossad agents assassinated him in Uruguay in 1965. Latvian government officials have described Cukurs as a war criminal and prosecutors have rejected requests made by his relatives to have his memory rehabilitated. Though eyewitness accounts say Cukurs took part in the killing of Jews and the burning of synagogues in Riga, some Latvians don't see him as a villain. Millers even suggested Cukurs helped a handful of Jews escape the Holocaust and compared him to Oskar Schindler, the German industrialist credited with helping to save more than 1,000 Jews during World War II. "His story is similar to that of Schindler because he was working for the German forces and saving Jews at the same time," Millers said. Efraim Zuroff, the head Nazi hunter at the Simon Wiesenthal Center in Jerusalem, called the comparison absurd, saying testimony by survivors given shortly after the war describe how Cukurs was personally involved in the torture and killing of Jews in Latvia. "No matter which way you look at this issue there is no doubt that Herbert Cukurs is a major war criminal," Zuroff said. The play has met mixed reviews in Latvia, with critics questioning why it's being staged at all and supporters saying it's shedding light on a famous Latvian aviator. Boris Maftsir, a Latvian-born Israeli film-maker, saw the musical during a recent visit to Riga, and said he was disturbed by the reaction of the crowd. "What shocked me was that after the show, they all gave it standing ovations. Hundreds of people, they applauded," said Maftsir, whose maternal grandparents were killed in Riga during the Nazi occupation. "Suddenly this Nazi officer can be a national hero. For me it was shocking."