The budget for the World Zionist Organization's Settlement Division, which was already the subject of public scrutiny, was increased in the 2015 State Budget from NIS 58 million to NIS 140 million, according to Labor MK Stav Shaffir, who raised the issue at a State Control Committee meeting on Monday.

"It is simply absurd that in Israel in 2014 there is a body that receives hundreds of millions from the country and does not have to be accountable to anyone about what they are doing with this money," Shaffir said at the meeting. 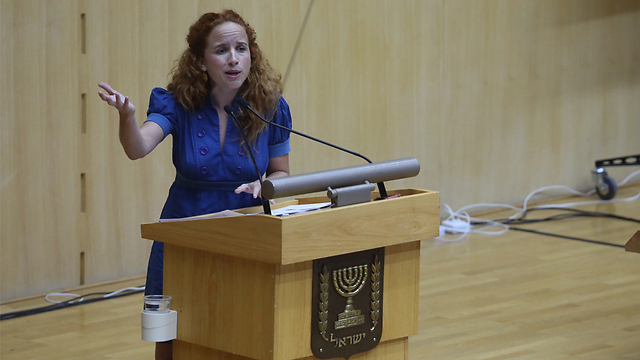 MK Stav Shaffir addressing the Knesset (Photo: Gil Yohanan)
"Taxpayer funds of the citizens of Israel that are directed to the division turn into political funds with the help of an extortionist lobby of the extreme right-wing," Shaffir continued. "And this fact does not concern the Finance Ministry, that not only does not put an end to the cash flow that has no supervision, it also gives them a treat." The State Control Committee held a special meeting on Monday surrounding the exposure of budgets transferred to the Settlement Divison, and to the West Bank specifically - a subject that arouses agitation among left-wing politicians.

In the past, a heated conflict arouse between Shaffir and members of the Bayit Yehudi party, among them MKs Ayelet Shaked and Orit Strook.

"I expect the Finance Ministry, that prides itself in transparency and new politics, not to enable one shekel to pass without knowing its specific destination and not to double the funds for those who hide from and deceive the public," said Shaffir.

In the latest debates on the issue of the Settlement Division budget, several lawmakers rose up against the budget issue, with Shaffir leading the charge. The freshman MK claimed that while the Settlement Division promotes its aims to support the development of towns in southern Israel that border the Gaza Strip, most of the funds of the division go towards the settlements beyond the Green Line and others are sent to bodies that are considered political organizations. About a month ago, during a debate in a Finance Committee meeting, an uproar broke out after it was discovered that the primary investments of the Settlement Division were allocated within the borders of the West Bank and the funding increasing significantly each year.

MK Zehava Gal-On of Meretz said "I sent a request in 2013 to implement the Freedom of Information Act for the Settlement Division and nothing has happened yet. I want answers, and to get an idea of how this business is being run."

Shaffir added during the debate, "You told us the Settlement Division funds go to everyone. To the Negev, Galilee, Golan and every region in Israel equally. I have to say that before we found out where the funds go – the additions added to the base funding of the division, and the increase of the funding by hundreds of percentage points every year – all of these facts raised suspicion." "Left-wing organizations are painting a distorted picture of the budget," said Shaked. "They are ignoring the fact that the Negev and Galilee get funding from other places as well, while projects in Judea and Samaria solely get funding from the Settlement Division." She added that, "The Labor Party, which once worked to build settlements, now works towards tearing them down. The budget of the division increased because the operational arm of the government that sends projects to it during the year was approved by the government."